After a tremendous spell of films, for about a decade and more, looks like the bewitching beauty Anushka Shetty has stopped accepting offers. Though the blockbuster Baahubali showered accolades on her, she is reported to be under inexplicable impasse. She hasn’t yet signed any new project and is categorically refusing all offers even by prestigious production houses.

Why isn’t Anushka inclined to take up new projects? Are there any personal reasons refraining her from taking up new ventures? The entire Telugu film industry is marooned in a quandary, since her very name in the lead draws a huge and lucrative business from the box office.Several in the fray are, in real terms, desperately looking forward to feature her in their films.

But, Anushka has completely distanced herself from every proposal. The reason which is widely heard is her bulged out physical shape. The film Size Zero posed a real bitter challenge to Anushka. The character in the film demanded her to gain weight to the point of obesity. Only with a view to winning the hearts of the audience, she did not worry about gaining weight and bulging up, which is totally against the discipline of heroines of the top order. Size zero, by letter and spirit, wreaked a big zero in block letters. 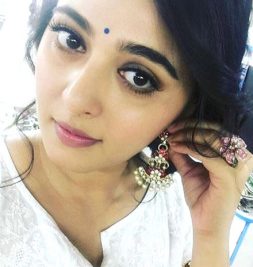 At present, like in the film Rudramadevi, she is all set to fight against herself. A few from her close quarters are murmuring that she is hell-bent upon reducing her size and weight. The whole process, for months together, seemed to have landed her in a spate of troubles. Going out of shape proved to be a big threat to her to invite any film or character.

Anushka is now coerced to face tough times and is reported to have told a few makers that she cannot sign any new films in the near future. One can just measure the magnitude of the crisis that Anushka is engulfed in. She also flew to Austria to undergo a course of medication reduce her size and weight. Anushka, in the recent past, signed only one film Sye Raa in Telugu. Sadly, the film, too, inflicted an untoward experience on her. On the sets of the movie, Anushka fell and was wounded.

However, Anushka was impressed by the story of Nishabdam written and directed by Mani Ratnam. On the other hand, she displayed her disinclination to team up with Balakrishna in Telugu. One senior producer from the Telugu film industry said that we can happily forget Anushka. It is also rumoured that she is seriously contemplating marriage because of which she has no worry about avoiding films. Only time and Anushka should voice out what exactly is ensconced in the store of secrecy.