Hyderabad: Popular messaging app WhatsApp, which is facing criticism for the changes it made in ita privacy policy, has decided to take a step back. With some already migrating to a ‘safer’ messaging service Signal, the Mark Zuckerberg-owned company seems to have felt jitters.

After publishing full-page advertisements in Indian newspapers, the latest update from the most used applications in the world, was assuring their users via their own ‘Status’ feature.

WhatsApp users are able to see four messages displayed on their status from a contact name ‘Whatsapp’. The popular messaging app shared its own status to assure users of its commitment to their privacy. 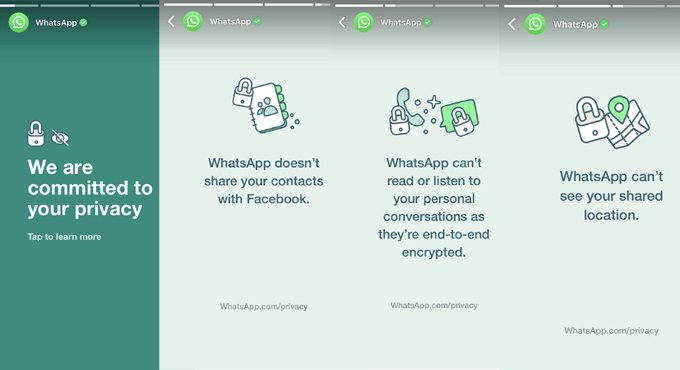 ‘WhatsApp can’t read or listen to your personal conversations as they’re end to encrypted’ and ‘WhatsApp doesn’t share your contacts with Facebook’.

The messaging app already sent notifications to its users, asking if they were agreeing to their new terms and conditions or not. They warned users that those who would not agree to the new privacy policy would not be able to use the app from February 8.  Later, they deferred the decision. The company issued a statement in a blog post:

“We’re now moving back the date on which people will be asked to review and accept the terms. No one will have their account suspended or deleted on February 8. We’re also going to do a lot more to clear up the misinformation around how privacy and security works on WhatsApp. We’ll then go to people gradually to review the policy at their own pace before new business options are available on May 15,” the blog post read.

Twitterati had mixed humorous reactions to this latest update find them below:

#WhatsappStatus, When I saw whatsapp status without whatsapp number saved in my contacts. Le me to mark whatsapp :- pic.twitter.com/X665KRFjmq

Without saving the number today I am seeing status of whatsapp…
#WhatsappStatus
Whatsapp to me…. pic.twitter.com/djbzlufAED

Without saving the number today I am seeing status of whatsapp…
#WhatsappStatus
Whatsapp to me…. pic.twitter.com/djbzlufAED