What makes it TikTok?

Whatsapp, Facebook, Twitter, Instagram, Snapchat… and the list goes on. Just when one thought there could not be any more social media apps, China came into the picture and introduced TikTok to the world. In a span of only two years, it has managed to create a huge impact on its users.

For those living under a rock, formerly known as musical.ly, TikTok is an app through which users can create and share quick 15-second videos in real-time. In India, TikTok has thrived despite being in controversial limelight as the government banned the app for displaying objectionable content to minors. Some users even reported seeing abusive and sexually explicit videos on the app. 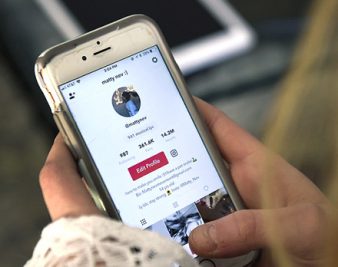 Not forgetting that it’s nearly impossible to keep teens away from their phone, social media is now so deeply-rooted in the lives of these teens that the presence of such pornographic, inappropriate content might be a rising concern for many.The app does not seem to be harmful as people, especially teenagers are just lip-syncing to songs or quotes from movies and TV shows, making dance videos, playing pranks and goofing around with ‘duet’ videos. But, digging deeper, one can find over 14 million videos uploaded every day, making it impossible for a parent to filter inappropriate or dangerous content.

Similar to its face-loving competitors like Instagram and Snapchat, TikTok is an image-focused app, as its central feature is viewing and uploading videos of young users. From school-going teens choreographing dance routines to thin, scantily-clad girls showing off their perfect bodies provocatively, a user can find them all on the app.

A recent “makeup removal challenge” went viral on TikTok earlier this year, but these videos could be highly demeaning for young girls who already suffer from body-image issues. Moreover, at this tender age, children want to be noticed. In a quest to seek attention in the form of ‘likes’ and ‘comments’, young users record dangerous acts like dancing in front of an oncoming bus or on a bridge, performing flips and cartwheels only because they saw others do the same on the app.

TikTok, taking note of this backlash, recently made a string of updates to protect its younger users. It enhanced its privacy settings, allowing users to set their videos to ‘Private’ so that only approved followers can see them. It also allows users to delete their account from the app directly, unlike before.

The app also ensures members can only receive messages from TikTok friends, and not from strangers. Parents also have additional tools to monitor videos as inappropriate videos have notification banners added to them. On a positive note, making such videos can be fun too, until one knows how to use them wisely!