The lofty position that an army chief enjoys in Pakistan almost compels him to enunciate a grand vision and share his pearls of wisdom about the entire gamut of governance and foreign policy.

General Ayub Khan kick-started this tradition way back in 1954, with his ‘short appreciation of present and future problems of Pakistan.’ Not of an intellectual bent, his successor, General Yahya Khan found it easier to enunciate the doctrine of ‘unrestrained frolicking.’ General Zia ul Haq, whose claim to intellectual prowess was the Reader’s Digest, advocated and implemented the Islamisation of Pakistan.

Generals Aslam Beg and Pervez Musharraf, both Mohajirs, put forward the concepts of ‘strategic defiance’ and ‘enlightened moderation’ respectively. In between, there was the ‘Kakar formula’ of General Waheed Kakar who decimated the ruling ‘troika’ to get rid of both the president and the prime minister. Generals Ashfaq Pervez Kayani and Raheel Sharif saw internal threats as a greater security challenge than even India but did not enunciate this into a formal doctrine except sanctioning a host of articles in the army’s Green Book.

However, it is the current army chief Gen Qamar Javed Bajwa who has the distinction of having formulated not one but two doctrines — one in 2018 and the other during his extension in 2021.

The London-based Royal United Services Institute (RUSI) coined the first iteration of the Bajwa Doctrine after his address to the Munich security conference in February 2018. The key elements of the doctrine were ‘biting back hard’ against threats issued by the Trump administration whether in terms of cutting funds or being asked to do more on terrorism or on Afghanistan.

There was also a second version of the doctrine that came in the wake of a supposedly ‘off-the-record’ interaction that Bajwa had with journalists in March 2018. It stressed democracy, ensuring proper respect of all the institutions of the state, exterminating terrorism, bringing terrorists into the mainstream, and viewing the 18th Amendment (that devolved more autonomy to the provinces) with a great deal of scepticism.

Bajwa doctrine 2.0 was articulated on 18 March 2021 during the Islamabad Security Dialogue. The larger picture he enunciated was Pakistan’s geo-economic vision that was centred around four core pillars: a lasting and enduring peace within and outside; non-interference of any kind in the internal affairs of neighbouring and regional countries; boosting intra-regional trade and connectivity; and bringing sustainable development and prosperity through the establishment of investment and economic hubs within the region. To this, he also added that national security was not the preserve of the armed forces and that “unless our own house is in order, nothing good could be expected from outside.”

The core and substance of his address were, of course, on India. The key points made were: “It is time to bury the past and move forward. But for the resumption of the peace process or meaningful dialogue, our neighbour will have to create a conducive environment, particularly in Indian-Occupied Kashmir.”

Pakistan’s offer of marching towards a “new future” depends on reciprocity; stable Indo-Pak relation was a key to unlocking the untapped potential of South and Central Asia; the process of sub-continental rapprochement was dependent on the resolution of the Kashmir dispute through peaceful means. The oblique reference he made to terror was that outstanding issues with neighbours had to be resolved through “dialogue in a dignified and peaceful manner.” What was significant in Bajwa’s address and of Imran Khan’s for that matter, was that the earlier strident tone and the usual kind of abusive language used for PM Modi were absent.

Moreover, Bajwa did not directly stress upon the reversal of the changes made in J&K on 5 August 2019 as a pre-condition for a dialogue though he did talk about establishing a ‘conducive environment’ without specifying details. It was also significant that he used the phrase ‘Indian Occupied Kashmir’ instead of the official ‘Indian Illegally Occupied Jammu & Kashmir’ (IIOJK) now being used by Pak leaders. 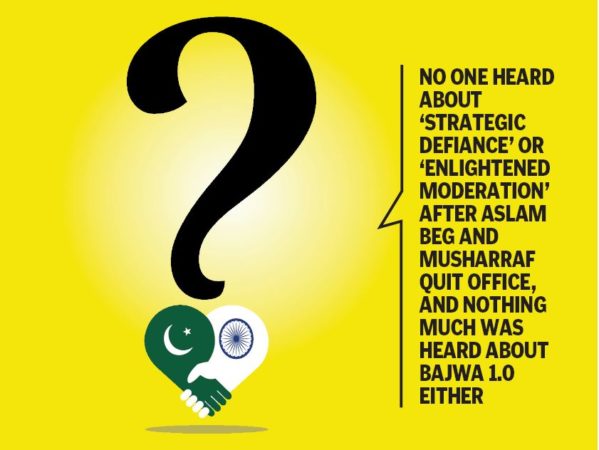 While some in India and even in Pakistan have taken Bajwa’s speech as implying that Pakistan had implicitly accepted the changes in Kashmir, Shah Mehmood Qureshi, the Foreign Minister, at the Dialogue undid whatever Bajwa tried to do in what appeared to be a collusive move. He raised all the old clichés — calling actions of 5 August 2019 in ‘IIOJK’ as illegal (meaning it had to be reversed) and unilateral, talked about a military siege, asked India to halt its illegal attempts to change the demographic structure of the ‘occupied territory’ and implement the UN Security Council resolutions.

Shorn of verbiage, Bajwa 2.0 underlined that a forward movement with India was desirable but not possible without a resolution of the Kashmir conflict and the onus was on India to create a ‘conducive environment’, whatever that meant. Seen in this light, what was new in Bajwa’s formulation?

If Kashmir continues to be the central issue and Bajwa, who represents the all-powerful military, cannot separate it from other bilateral issues so that the latter are not held hostage to Kashmir, then what is the hullabaloo about? Moreover, can Bajwa carry the Corps Commanders with him in a formulation that accepts the 5 August 2019 changes? Can Bajwa put an end to the terror infrastructure and industry against India? Answers to such questions would be vital for India.

Having been betrayed so often can India afford to trust Pakistan again on the basis of one speech or should it play a wait and watch game, seeing if Bajwa can walk the talk? Bajwa 1.0 was articulated 20 months before his scheduled retirement in November 2019. Whether by design or accident, Bajwa again has 20 months (till November 2022) in his extended tenure to ‘bury the past’ and make something of his doctrine 2.0.

For this to happen he will, however, have to swim against the tide of history. Ayub Khan’s paper was discussed in the cabinet but was consigned to the archives since it did not contain anything substantive. No one heard about ‘strategic defiance’ or ‘enlightened moderation’ after Aslam Beg and Musharraf quit office. Nothing much was heard about Bajwa 1.0 either, possibly due to his critical views about the 18th amendment. Will Bajwa 2.0 then meet the same fate? We should find out soon enough. ANI

(The author is a former Special Secretary, Cabinet Secretariat, Government of India and the author of three acclaimed books on Pakistan)