Hyderabad: Always someone who did things differently, Vaishali Neotia followed her heart in all steps of her life. And this is what made her choose entrepreneurship over working in a corporate setup.

Born in a Marwadi family in Kolkata, Neotia was expected to take up commerce and join the family business but she did not bow down to peer pressure. With the support of her parents, she chose engineering and even after that she did not join the corporate sector. She followed her passion and started her own company in 2011. 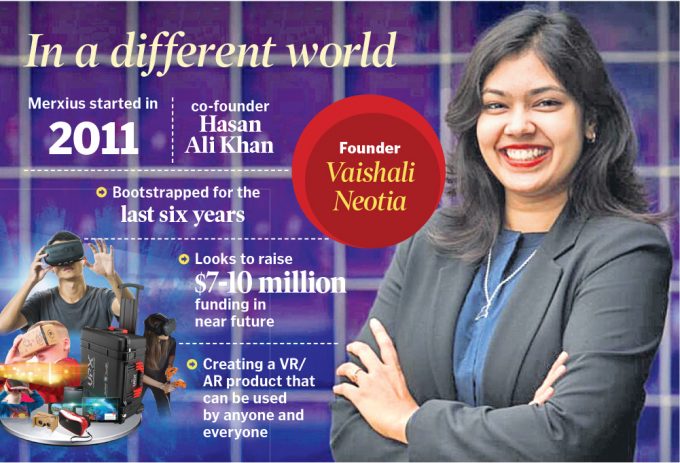 “At that time we started off as a creative company to help other startups but slowly we realised the potential of augmented reality and virtual reality. This happened at a time when the technology was at a very nascent stage in India,” Neotia told Telangana Today.

However, in the last six years the company that used to provide AR/VR services to different sectors including the real estate pivoted towards creating a platform to democratise this technology. This means that the company has developed a tool wherein anyone from any field can create VR and all they need is a 3D model and the headset. Called RealSim Editor or RED, Merxius wants it to become a de facto standard for extended reality (a combination of VR and AR). The company has signed up with three different organisation namely the Indian Army, Tata Elxsi and Satya Aerospace who are currently using RED.

Nudge her about when did the bug of entrepreneurship bite her, Neotia said, “I learnt jugaad from my parents. My father was my inspiration to become an entrepreneur. He always taught me to think about solutions and not problems. That is how I took up a project in engineering college to develop a Facebook app for the World Cup, which I did with my current co-founder and then friend Hasan Ali Khan. That set the ball rolling for me to create something of my own.”

One of incidents that she believes further provided impetus to her entrepreneurship streak was during her placement in college. “When I attended an interview (very reluctantly) for a job, the interviewer saw potential in me and told me not to take up that job. That point pushed me to get into entrepreneurship,” 30-year-old founder informs.

For Neotia, entrepreneurship is all about mindset and the need to think beyond one’s comfort zone. That is how she chose a field that was considered out-of-bounds for women – technology. And for her technology is about making it useful and understandable to the layperson.
In terms of biases in the industry, she unapologetically agrees that there is a lot of bias.

“Whenever we approach a venture capitalist for funding, I can see that they are more comfortable talking to Hasan and not to me. It looks like they are having their own men’s kitty party. They may not say it on your face but I can sense the un-comfortableness in their behaviour about the fact that a women is in a technology field,” she laments.

The six-year-old startup started off by using virtual reality and augmented reality as a service, wherein they worked with different sectors including the real estate. In this, they used to show an apartment by using VR. The company creates web, mobile and Augmented Reality applications. It was specifically a business-to-business platform with some offering for individual consumers as well.

The first product by the company was called Marmo which was an industrial augmented reality framework and it helped in machine maintenance and operation. However, almost three years ago the company launched a product called RealSim Editor which was mostly used in the real estate sector to visualise apartment floor plans. This product gave the company the much needed push in the field of AR/VR.

The ten people strong company is now incubated at the Tata Elxsi incubation programme which will be ending in December this year. It is a completely bootstrapped company that has been using revenues from services offered so far to fund the operations. However, now it is looking to raise $7-10 million funding as it plans to scale up their operations in India.