Telugu cinema has been seeing a shift in the way promotions are done, with emerging star Vijay Deverakonda stepping into the shoes of the publicity team and going all out to connect with the audience.

Vijay always has something up his sleeve to promote himself in general and his new releases in particular. The young actor often comes up with novel thoughts to engage his fans. The Arjun Reddy actor is showing his versatility not only in script selection but also in the way a movie can be taken close to people.

Before his recent release Taxiwala, the actor took to Twitter saying his childhood dream was to be a driver which he got to play in the film. To make it ‘real and fun’, this Taxiwala asked his fans to tweet to him writing “why you should be picked” for a ride with Vijay. He promised to pick a few and ride them to their office, college, or school. 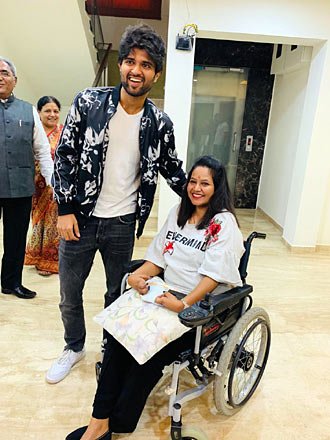 As promised, Vijay reprised his on-screen role and turned Taxiwala by picking a journalist, a cop, a singer, and a few of his fans whom he calls his rowdies, and rode them to a place of their choice.

This is just an icing on the cake. Earlier this year, the 29-year-old actor asked his fans to accompany him to the Filmfare award function where he received an award for Arjun Reddy. As promised, he picked one fan through the entries received and took him to the star-studded event.

The budding actor, who is known for his witty replies on social media, also knows how to tackle trolls and criticism well. When Taxiwala faced piracy issues much before its release, the actor responded to it by releasing a video featuring children. In the video, by referring to uncooked pasta and ready-to-eat pasta added with all the ingredients, he explained the difference between unprocessed pirated version which was out and the final cut which was to be released.

Also, when he faced backlash for a song lyrics in Geetha Govindam, he converted the criticism to his advantage. Vijay posted the karaoke version of that song and asked his fans to send their versions with the modified lyrics.

Not just these, the actor was also cool enough to treat fellow Hyderabadis on his birthday by sending out ice cream trucks on roads and distributed ice creams to passersby in hot summer.

Vijay, who rose to fame with Pelli Choopulu, even showed his generous side on various occasions such as auctioning his Filmfare award to donate the amount to Chief Minister’s Relief Fund and contributing money to flood relief operations in Kerala and Srikakulam.

With all these activities, Vijay Deverakonda is giving the marketing agencies a run for their money.