Hyderabad: Outrage continued to pour out over the rape and murder of the veterinary assistant surgeon with several citizen groups and student groups rallying in protests across the city.

Even as the Shadnagar police which arrested the four suspects in the heinous crime prepares to seek custody for further investigations, the victim’s family shut itself to grieve privately and refused to meet others on Sunday.

The apartment where the veterinary doctor along with her family lived in Shamshabad was being flocked by social activists, politicians and media since gruesome killing came to light.

On Sunday, other residents shut the gate of the apartment and locked it to ensure the bereaved family was not disturbed.

The residents argued the family was unduly being disturbed with visits by different persons and enquired about the gruesome incident. Some of the residents also sought the help of the police in blocking the roads to the apartment building.

Leaders of various political parties including a Congress party delegation led by Malkajgiri MP Revanth Reddy and other social activists had to return without meeting the family members of the victim.

Meanwhile, protests over the incident continued across the city on Sunday at various places with people demanding stringent action against the four suspects in the case.

On the other hand, the Shadnagar police who have arrested the four suspects in the rape and murder, are going to file a petition on Monday before the Shadnagar court seeking police custody for further investigation in the case.

Cyberabad Commissioner V C Sajjanar, asked the media houses in the city against disclosing the identity of the rape victim of Shamshabad.

“The continuous telecast of gruesome details of the incident has generated fear among the common people, especially women and their parents. We request media houses to joins hands with us and act with responsibility,” he said.

The Commissioner cited the Supreme Court orders in this regard and added, “Dismaying the court orders, is act of being irresponsible which can invite legal problems”. 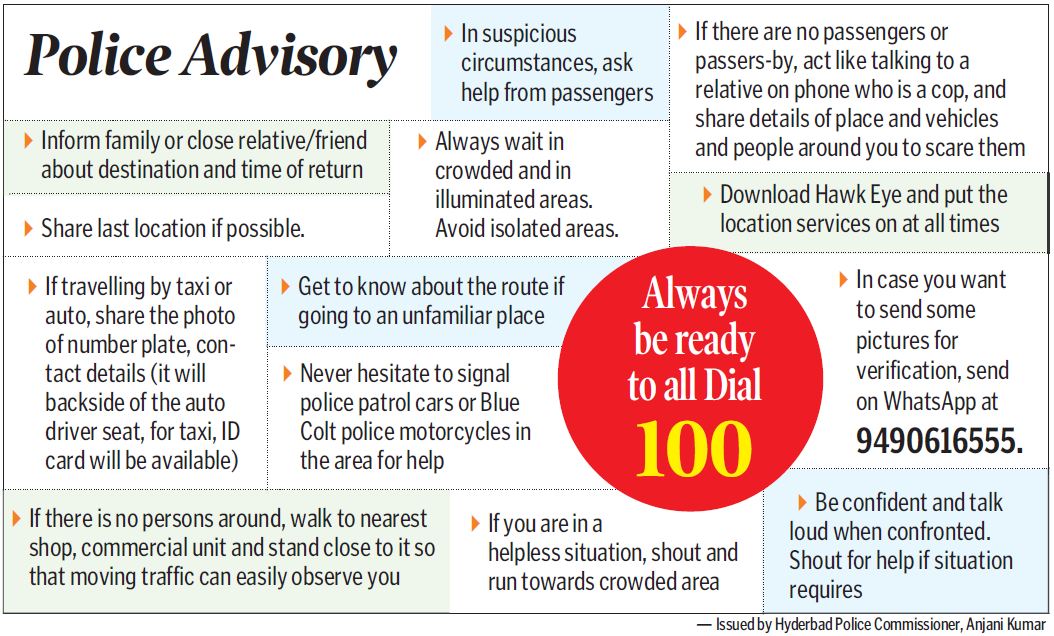 The Cyberabad police are seeking legal opinion on registering a case against the fuel station from where the suspects bought fuel in container to set ablaze the body of the assistant veterinarian.

The move of the Cyberabad police comes after people started raising questions on the irresponsible way in which the petrol pump staff dispensed fuel in a container.

The suspects had first approached a petrol station to buy fuel. As the attendant there refused to fill the bottle, they approached another fuel station and bought it.

“So far, no case has been registered against the management of the fuel station. We are seeking legal opinion before going ahead,” said V C Sajjanar, Commissioner Cyberabad.

Hours after the incident of the gruesome killing of the veterinary doctor at Shadnagar, another woman from Dhoolpet had reportedly ended her life by setting ablaze herself at Shamshabad.

Earlier in the month, a farmer Kurah Suresh doused a woman Tahsildar Vijaya Reddy with petrol and set her ablaze at her office. The tahsildar’s car driver who tried to save her also sustained injuries and died in the incident while the farmer who too sustained burns, and died a few days after the incident.

Meanwhile, Joint Secretary of Consortium of Petroleum Dealers for South India, Rajiv Amaram said the outlets were authorised to sell the fuel in limited quantities in small containers. “There is nothing that the fuel cannot be sold in bottles. Most fuel stations are not doing it keeping in view the recent incidents of misuse of the fuel,” he said.

Even three days after a veterinarian was gang-raped and murdered on the outskirts of Hyderabad, Twitter users on Sunday continued to vent their anger and shock over the macabre crime, demanding death for rapists and action against erring policemen.

Bollywood actress Anushka Sharma wrote on her Twitter handle @AnushkaSharma, “Pain… anguish… anger… frustration… disbelief… this is absolutely horrific and should be given the severest of punishments. My thoughts and prayers are with the family. Justice should be served swiftly.” In reply, one fan added: “I cannot imagine what her family is going through at a moment. Until we don’t have stringent laws, this kind of barbaric acts will sadly continue.”

Pain..Anguish..Anger..Frustration..Disbelief.. this is absolutely horrific and should be given the severest of punishments. My thoughts and prayers are with Priyanka’s family. Justice should be served swiftly.

Another reacted: “Voice of people like you all are heard… why don’t you all come forward to make it a movement and speak for justice because when common people like us raise the voice the government swiftly brushes us away….”

Reacting to the trend, a user stated, “Tommorow is too late, stand up for women today.” Another netizen asked what action should be taken against the erring cops?

A user posted a clipping of the rape-murder accused being transported to jail from court and wrote: “In this video, Hyderabad Police isn’t escorting any VVIP, but giving protection to rapists. Public anger is at its peak. Enough is enough.” One user posted a picture of a body of a hanged man dangling from a crane jib and demanded that people wanted this fate for the accused in this case too. “The rapists must be hanged immediately. Why is the government keeping on delaying this issue?”. Another user remarked: “Don’t show mercy to these monsters; don’t take them under law; hand them to the public; public will show them the pain of sis! #HangRapists”.

We are failing as a society: Mahesh Babu

Telugu superstar Mahesh Babu reacted to the heinous gang-rape and murder of a 27-year-old veterinarian on the outskirts of Hyderabad on November 27.

The actor took to Twitter to appeal to the government demanding capital punishment for the accused in such brutal crimes.

He tweeted: “Day after day, month after month, year after year… NOTHING is changing. We are failing, as a society! Sending my personal appeal to the State & Central governments. @KTRTRS @PMOIndia we need stricter laws, capital punishment for heinous crimes like these…”

My heartfelt condolences to the families of the girls. Your pain is irreversible! Let’s come together to give justice to all the women and young girls of our country… Let’s make India safe!!#JusticeforPriyankaReddy #StopRapes #SaveHer

In a separate tweet, the Telugu superstar expressed his condolences to the family members of the victim. “My heartfelt condolences to the families of the girls. Your pain is irreversible! Let’s come together to give justice to all the women and young girls of our country… Let’s make India safe!!#Justicefor(victim’s name)#StopRapes #SaveHer,” he wrote.

Bollywood actress Parineeti Chopra also expressed her disgust over the horrific incident and expressed condolences to the victim’s family. “Shocked. Saddened. UTTERLY DISGUSTED!!! My thoughts and prayers to the family of (victim’s name),” she tweeted.

Shocked. Saddened. UTTERLY DISGUSTED!!! My thoughts and prayers to the family of Dr. Priyanka Reddy. #PriyankaReddy

All India Organisation of Imams’ head Umer Ahmed Ilyasi on Sunday demanded public hanging of those behind the recent rape and murder of a veterinary doctor in Hyderabad. He made these remarks at the Gita Festival in presence of RSS chief Mohan Bhagwat, Union minister Smriti Irani and Lok Sabha speaker Om Birla. The programme is being held at the historic Red Fort. Ilyasi, the chief imams, who shared the dais with Bhagwat at the event on holy Hindu book Gita, said that by not celebrating Ayodhya verdict, Hindus in the country showed they are sensitive towards the sentiments of Muslims.