Hyderabad: Following thefts of few flower pots and damages to the vertical gardens, which were put up at HICC, Madhapur during GES, by unidentified persons, Greater Hyderabad Municipal Corporation (GHMC) is planning to remove them temporarily.

The flower pots and vertical gardens were arranged as part of the three-day Global Entrepreneurs Summit held at HICC recently. GHMC has made grand arrangements for the programme, including painting the Hitec City flyover and other structures with colourful artworks. 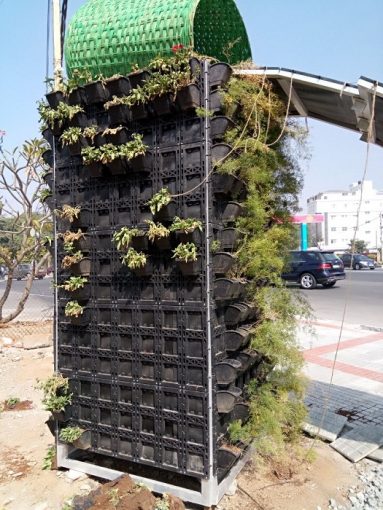 Nearly 500 animal and bird shaped flower pots were donated by various companies under Corporate Social Responsibility funding for GES. However, 40 such flower pots were stolen despite five GHMC staff on guard duty, said a senior official from GHMC.

This apart, 80,000 small pots were arranged as vertical gardens opposite the HICC Gate and other spots on the NAC road. Of these, nearly 5,000 such pots have been stolen despite security deployed at HICC Gate, the official said.

“Cases have been booked by the Gachibowli and Madhapur Police Stations. The flower pots will be brought back after surveillance cameras are installed on a permanent basis on these roads,” said the official.