Anyone who comes to Hyderabad and has explored the food and dessert scene here will definitely hear the mention of Concu at some point. A dessert place started by entrepreneur Sahil Taneja in 2012, Concu is a passion project that has witnessed a constant ebb and flow of change since it started.

From a small outlet in Begumpet to Jubilee Hills, Concu finally came full circle, when it opened doors inside the heritage property of Country Club in Begumpet.  The story of its founders is also an interesting one. Sahil was qualified to become a fire safety engineer, but he chose to go the baking route as it was where his heart lay.

After a year of working with his father’s travel agency, he turned his sights to confectionary on the suggestion of his girlfriend Swati and researched about institutes which offered courses in field. A three year stint with Harrods as a pastry chef gave him a good idea on what would work for Hyderabad and he returned to open his place supported by Swati. 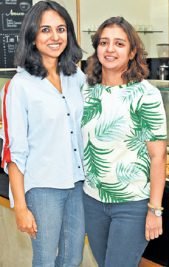 The essence of the new outlet is in keeping with Concu standards, but it is a tad different in terms of its interiors and menu options which cater to the palates of those in Secunderabad. “It’s not every day you get to open your store inside a heritage building. A lot of people from Secunderabad used to ask us if we plan to open another place in this side of the city as getting to the Jubilee Hills branch weaving through the traffic was difficult. So, when the opportunity came, we grabbed it,” says Swati Upadhyay, Sahil’s wife and who helps manage the two outlets – Begumpet and Jubilee Hills. Sahil and Swati both make it a point to visit the new outlet from time to time, the day-to-day management is taken care of by their trusted employee Pooja Reddy who worked with them for three years and had a keen understanding how things work at Concu.

The couple is happy with the way their venture is shaping up. At a time, when the artisanal cakes and exotic desserts from far and wide were a blip on the city’s food radar, Sahil took the gamble of bringing in imported ingredients like berries, Belgian chocolates, and things like gold leafs for garnishing on his cakes and pastries. “We were probably the first people to introduce the Russian honey cake called Medovik in the city. It was later that it showed up at other places. We are stickler for details and researched a lot for every part of Concu, from the kitchen to the plating, the colour scheme which changed each time we moved to a different location,” adds Swati. With plans afoot to open two more outlets, Swati and Sahil are busy figuring out the logistics to execute their dreams.