What ought to worry us are the events escalating and cascading across a nation that smack of two specific conditions bestowed upon certain groups of people: immunity and impunity.
Vigilante groups can pulverise those they deem to be culturally different, morally decadent, politically ‘non-conformist’ or simply because their preferred cuisine is different. While one is loath to present a hierarchy of victimisation and violence, there are greater crimes, such as rape and, eventually, the utter and complete destruction of the victim by burning her. From where does the courage to indulge in such violence emanate?

A social psychological answer may be forthcoming, via the usual matrices of class, gender, caste, political support, among others. But in addition to these undoubtedly crucial factors that empower and enable some individuals and groups to set themselves on this path of targeted destruction of others, perhaps we need to also ask whether a culture of immunity is not being manufactured, using these same matrices, so that some castes, classes and identities are immune from legal action.

‘Immunity’ is a commonplace term in medical sciences, but it also has strong cultural roots and semantic variety. The Oxford English Dictionary (OED) tells us that it means exemption from a service, obligation, or duty; freedom from liability to taxation, jurisdiction, etc; privilege granted to an individual or a corporation conferring exemption from certain taxes, burdens, or duties (in later use especially from prosecution or arrest). It is a ‘particular exemption or privilege’. An obsolete meaning included ‘freedom from ordinary restraints; undue liberty, licence’.

The question is: are particular individuals and groups being given a cultural-legal immunity through their membership (formal) or allegiance (informal) to political groups and ideologies? Exemption from a commitment to principles and jurisdiction of law and order or responsibility towards fellow-citizens produces individuals and groups who then operate minus these basic conditions of citizenship. Further, immunity that manifests, so clearly these days, as freedom from ordinary restraints leading to ‘undue liberty’ and the ‘licence’ to maim, kill and destroy others. 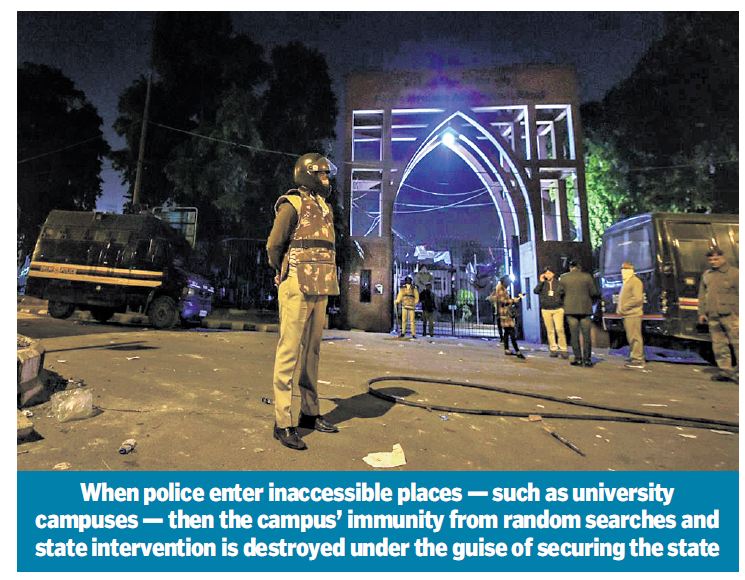 We know from studies that culturally and medically, immunity is about borders and differences and policing those borders. Yet, as Emily Martin has shown us, such policing invariably means creating social hierarchies and instituting some of those hierarchies as inviolable borders. Policing those borders, preventing contagion – mixing – and contamination/infection would be a natural outcome of creating those politically essentialist groups.

Immunisation, then, is the creation of an inside/r and outside/r binary, and categories of those who belong and don’t belong. In order to keep some people, groups, identities and ethnicities ‘safe’ and ‘unpolluted’ – I use the latter term intentionally, to recall our hoary history of caste – the inside/r patrols borders and sets out to destroy any potential signs of intrusion.

When nations produce lists of who is inside/r and outside/r, via, to take a random example from 20th century history, citizenship rolls of Jews, Romana, Blacks etc, to produce a mythical ‘safe’ der Lebensraum (living space), they have positioned some, even within the national borders, as potential pathogens. Pogroms are generated by vigilante groups, law and order personnel and even the judiciary – who are part of the inside/r space, and therefore immune – in order to run cleansing programmes to secure the borders.

They can use any means to ensure this security, and their actions are exempt – immune – from legal action. As Emily Martin put it in her 1990 essay, ‘Towards an Anthropology of Immunology: The Body as Nation State’, ‘the conception of a clear boundary between self and nonself is a conception of the nonself world as foreign and hostile’.

A related concept-metaphor aligned with immunity also enters the social imagination: impunity. To return to the fount of etymology, the OED, impunity is ‘exemption from punishment’. Once immunity is bestowed then, willy-nilly, it means an exemption from punishment. That the crimes one commits in the guise of protecting one’s borders and through the assumption of immunity may be heinous, is a negligible point. What comes across, especially in scenarios where rapists under investigation burn their victims to prevent them from testifying, lynchers display evidence of their violence and police personnel execute prisoners without going to trial, is: impunity emerging from immunity.

Impunity is the ability, says the OED about one usage of the term, to withstand severe shocks. If one looks at the group of people and individuals who operate with impunity in India today, one can see that they do withstand severe shocks, like media exposure, public outrage and even, on occasion, a castigating remark from the judiciary. None of these shocks matters, and their ‘work’ of hounding, injuring people, continues unabated.

Oddly, impunity also enables some forces, such as the police, to enter into hitherto inaccessible places – such as university campuses, and their various halls, such as libraries, hostels – and molest students and residents. Apparently, then, the campus’ renowned immunity from such violence has been destroyed, in the name of state security. That is, the campus’ immunity from random searches and state/military intervention has been destroyed under the guise of securing the state: the state apparatus claims immunity from prosecution at the precise moment that it violates the immunity of the campus.

The combination of immunity and impunity in contemporary India ought to be a matter of concern. Positioning some communities and groups as being immune enables them to behave with impunity. Conversely, locating others beyond the borders, as outside/r renders them vulnerable to gratuitous violence. Registries and census operations consign some to the immunity-impunity paradigm even as they, simultaneously, construct entire populations as pathogenic threats to be destroyed.

The new immunity paradigm has generated an autoimmune disorder. Specific forces born and bred by/within such a state, set about dismantling the nation’s plural world, with impunity.
We are at war with our-selves precisely because the ‘our’ has been split along ‘us’ and ‘them’.