Amol Palekar entered Bollywood at a time when superstars such as Rajesh Khanna and Amitabh Bachchan ruled the box office. He became synonymous with the ‘middle class man’ in the 1970s and received a Filmfare and six State awards as Best Actor.

He made his debut in 1971 with the Marathi film Shantata! Court Chalu Aahe, but, went on to do several Hindi movies with Basu Chatterjee and Hrishikesh Mukherjee. He has been active since 1967 as an actor, director and producer, in Hindi and Marathi movies as well as theatre.
As a director, he is known for dealing with progressive issues and sensitive portrayal of issues related to women. He proved his mettle as a director with movies such as Thodasa Roomani Ho Jaayen and Paheli. Thodasa Roomani Ho Jaayen has been made part of management courses. Paheli was India’s official entry for Best Foreign Film at the 2006 Oscars. 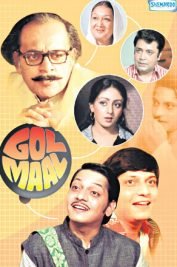 One of the best movies of Amol Palekar, directed by Hrishikesh Mukherjee, Golmaal was released in 1979. Utpal Dutt plays the role of Palekar’s boss (Bhavani Shankar) and he hires Palekar (Ram Prasad Sharma) because Prasad is not only good at his work but has no interest in sports, music and movies, and also has a moustache. Dutt’s dialogue “Moustache is the mirror of a man’s soul” was one of the popular one-liners of the film.
One day, Ram’s boss catches him watching a hockey match and, to save his job, he creates a fictional twin brother Laxman Prasad Sharma, who is only good at music and sports, and, doesn’t have a job. So, boss asks Laxman to teach music to his daughter Urmila (Bindiya Goswami). In the meanwhile, to save himself from another lie, he ropes in a socialite Dina Pathak to act like his mother (his parents are dead in reality). And then, one day, Dutt bumps into the real Pathak at a party and she creates a twin sister to save Palekar. The chaos is hilarious and the background score and songs add to the storyline. How the truth comes out and how Ram Prasad elopes with Urmila and gets married forms the climax. 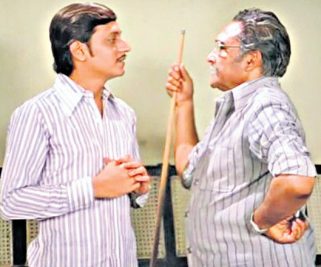 This film is loosely based on British movie School of Scoundrels. It was a box office hit. Amol Palekar plays the role of Arun — an extremely young shy man who falls in love with Prabha — Vidya Sinha. He follows her every day to work but cannot muster enough courage to propose to her, Sinha is fully aware of his presence but waits for him to make the first move. Then enters Nagesh — Asrani, who is smart and confident, and, tries to impress Prabha in every possible way. With no solution in sight, Arun turns to Colonel Julius Nagendranath Wilfred Singh played by Ashok Kumar, who gives Arun a complete makeover and helps him win over Prabha. 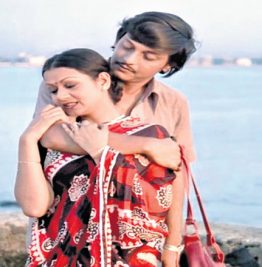 In this film, Amol Palekar depicts the struggle of middle class man living in Mumbai. Sudip (Palekar) and Chhaya (Zarina Wahab) work in the same private firm and are in love. They decide to buy a house first and then get married, so they invest in a flat, but the builder of the apartment absconds with everyone’s the money. Meanwhile, Chhaya’s boss (Sreeram Lagoo), owner of the firm and an elderly widower proposes to her. Sudip asks Chhaya to accept the proposal, saying the old man with heart problem would die soon and they could have all his money. Chhaya reluctantly marries her boss, but, later, becomes a dutiful wife and turns down Sudip. 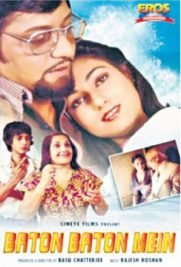 Another romantic comedy directed by Basu Chaterjee. In this Amol Palekar plays the role of Tony Braganza, who meets Nancy (Tina Munim) in a local train in Mumbai, after being introduced by Nancy’s brother. They start travelling together and dating. But, initially, Nancy is not sure whether Tony is the right guy to get married. Even Tony is wary of commitment. So, they part ways. But, family members help them understand each other better and they get married in the end. Evergreen songs like Uthe sabke kadam and Suniye kahiye are part of this movie.