Comets are icy bodies in space that release gas or dust. They are often compared to dirty snowballs, though recent research has led some scientists to call them snowy dirtballs. Comets contain dust, ice, carbon dioxide, ammonia, methane and more. Astronomers think comets are leftovers from the material that initially formed the solar system about 4.6 billion years ago.

Some researchers think comets might have originally brought some of the water and organic molecules to Earth that now make up life here. To research this hypothesis, the Rosetta mission, which landed a probe on a comet on Nov. 12, 2014, studied its nucleus and environment and observed how it changes as it approaches the sun.

In general, comets are named after their discoverer. For example, comet Shoemaker-Levy 9 got its name because it was the ninth short-periodic comet discovered by Eugene and Carolyn Shoemaker and David Levy. Spacecraft have proven very effective at spotting comets as well, so the names of many comets incorporate the names of missions such as SOHO or WISE.

For centuries, scientists thought comets traveled in the Earth’s atmosphere, but in 1577, observations made by Danish astronomer Tycho Brahe revealed they actually traveled far beyond the moon. Isaac Newton later discovered that comets move in elliptical, oval-shaped orbits around the sun, and correctly predicted that they could return again and again.

The solid nucleus or core of a comet consists mostly of ice and dust coated with dark organic material, according to NASA, with the ice composed mainly of frozen water but perhaps other frozen substances as well, such as ammonia, carbon dioxide, carbon monoxide and methane. The nucleus may have a small rocky core.

As a comet gets closer to the sun, the ice on the surface of the nucleus begins turning into gas, forming a cloud known as the coma. Radiation from the sun pushes dust particles away from the coma, forming a dust tail, while charged particles from the sun convert some of the comet’s gases into ions, forming an ion tail. 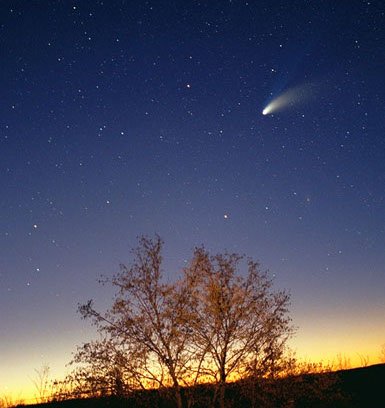 Halley’s Comet is likely the most famous comet in the world, even depicted in the Bayeux Tapestry that chronicled the Battle of Hastings of 1066. It becomes visible to the naked eye every 76 years when it nears the sun.

When Halley’s Comet zoomed near Earth in 1986, five spacecraft flew past it and gathered unprecedented details, coming close enough to study its nucleus, which is normally concealed by the comet’s coma. The roughly potato-shaped, 9-mile-long (15 km) comet contains equal parts ice and dust, with some 80 percent of the ice made of water and about 15 percent of it consisting of frozen carbon monoxide.