In August 1947, two nations – Pakistan and India – came into existence. Pakistan comprised two geographically and culturally separate areas to the east and the west with India in between. The western zone was termed West Pakistan and the eastern zone was called East Pakistan. Despite the east zone being more populated, political power was concentrated in West Pakistan. Urdu, the language spoken in West, was made the official language and forced on the East, where the language was Bengali. And the East’s Bengali culture was looked down upon. The gulf between the two discontinuous zones grew wide as the years went by.

East Pakistan brought in more income, but its share of political power and economic benefits was always made to be less. As a result, the people of East Pakistan started to protest this discrimination, giving rise to the historic six-point movement. The six-point demand made by the Awami League, led by Sheikh Mujibur Rahman in 1966, primarily aimed at sharing political power and economic benefits proportionate to their population and wanted the east zone to have provincial autonomy within Pakistan.

The demand was rejected by the Pakistani government. Mujibur Rahman launched a mass movement for mobilising support for the six-point programme in 1966. The movement generated spontaneous mass support throughout East Pakistan. Against this backdrop, general elections were held in Pakistan on December 7, 1970, to elect members of the National Assembly. Voting took place in 300 constituencies — 162 in East Pakistan and 138 in West Pakistan. The elections saw a fierce contest between the west-based Pakistan Peoples Party (PPP) and the east-based Awami League. The Awami League won an absolute majority of 160 seats, all of which were in East Pakistan. The PPP won a mere 81 seats, all in West Pakistan. This win gave the Awami League a majority in the 313-seat National Assembly and the right to form the federal government in Pakistan.

West Pakistan did not want a party from East Pakistan to head the federal government and delayed the formation of the new government. This delay led to the eruption of political discontent and cultural nationalism in the East. It was dealt with brutal force by the West Pakistan government, including that infamous genocide in East Pakistan. On the night of March 25, 1971, the Pakistani Army launched Operation Searchlight to “crush” Bengali resistance in which Bengali members of military services were disarmed and killed, students and the intelligentsia systematically liquidated and able-bodied Bengali males just picked up and gunned down.

The violence unleashed by the Pakistani forces on March 25 proved the last straw and ended any chance to negotiate a settlement. Sheikh Mujibur was arrested by the Pakistan army on the same day. Following these incidents, Sheikh Mujibur Rahman signed an official declaration of independence and the civil war started. The civil war in East Pakistan continued throughout 1971 and led to an estimated 10 million people flooding into the eastern provinces of India as refugees. Facing a mounting humanitarian and economic crisis, India started actively aiding and organising the Mukti Bahini, the Bangladeshi resistance army,. On 17 April 1971, a provisional government was formed with Sheikh Mujibur Rahman, who was in prison in Pakistan, as President. The genocide by the Pakistani army intensified.

India had by then concluded that instead of taking in millions of refugees, it would be economically better off going to war against Pakistan. As if inviting it, the brutal Pakistani regime unable to control civil war, launched a preemptive strike by Pakistan Air Force on Indian Air Force bases on December 3, 1971. The strike was the trigger, which marked the official start of the Bangladesh War. India retaliated. It was all over in 12 days. The Indian army surrounded Dacca from all sides. General AAK Niazi, Pakistan’s commander in East Pakistan, surrendered to the Indian forces with over 93,000 Pakistani troops, making it the largest surrender since World War II

Indian Prime Minister Indira Gandhi provided extensive diplomatic and political support to the Bangladesh movement. She toured many countries in a bid to create awareness about the Pakistani atrocities against Bengalis. This effort was to prove vital later, to justify military action by India. Following Pakistan’s defeat, India also ensured prompt recognition of the newly-independent state of Bangladesh. She also managed to keep at bay the US military intervention in the war on behalf of Pakistan. It was brilliant leadership, showcasing humanity, diplomacy, courage and astuteness in creating a sovereign new nation.

Major Gen DK Palit (rtd), who recorded the graphic account of the Bangladesh liberation war, in his book ‘The Lightning Campaign’ says, “the Indian armed forces executed, within the brief period of twelve days, the most decisive liberation campaign in military history, giving a nation of 75 million people its independence in one lightning strike. Operating in one of the most difficult terrains in the world, in which the few existing national highways and railway systems had been disrupted by their insurgent allies, Indian forces, moving with incredible swiftness, brought a formidable enemy to his knees.”

It is a unique event in military history. India was pivotal to the liberation of Bangladesh. India had to incur great economic and military costs and face the displeasure of a superpower like the US and some influential Muslim countries. It would have been in the fitness of things if an all-party delegation with some surviving military veterans who participated in the great war on behalf of India were there on the 50th anniversary of Bangladesh liberation with Prime Minister Narendra Modi.

Diplomatic relations between the two countries formally began in 1971 with India’s recognition of independent Bangladesh. The two countries have much in common – a shared history and a common heritage – linguistic, cultural, literary and the arts. Rabindranath Tagore penned the national anthems of both Bangladesh and India. The two nations were strong allies because of the decisive role of India in Bangladesh Liberation War.

The relations between the two countries had usually been friendly, though there have been some disputes. However, from the mid-1970s, relations worsened owing to the influence of religious fundamentalism and increasing emphasis on Islamic identity over the country’s ethno-linguistic roots. Bangladesh developed closer ties with Islamic nations. In the 1980s, the two countries joined different cold war alliances, which further chilled the relations. But, with the onset of economic liberalisation in South Asia in 1990s, the relation changed for the better and the bilateral engagement improved. The historic Ganges Water Sharing Treaty in 1996 and the long pending land boundary agreement in 2015 opened a new era in Indo-Bangladesh relations.

Since the visit of Modi to Bangladesh in 2015 and the return visit of Bangladeshi Prime Minister Sheikh Hasina to India in 2017, several notable developments took place, strengthening bilateral relations between the two countries. They include resolution of long-pending land, maritime boundaries, and agreements over several areas, including electronics, cybersecurity, space, information technology and civil nuclear energy. Bilateral trade has also increased significantly, exceeding over $10 billion, and in fact, India and Bangladesh have become the largest trading partners in South Asia.

Bangladesh is flourishing economically and has recently overtaken India in its per capita income. In this context, the Act East Policy of India has helped increase the interaction of the Northeastern Indian States with Bangladesh. India and Bangladesh are also close strategic partners in counter-terrorism.

In recent years, some disquiet has crept in in the diplomatic relations of the two countries. India objects to China’s Belt and Road Initiative because it believes that the China–Pakistan Economic Corridor project ignores New Delhi’s concerns on sovereignty and territorial integrity. But Bangladesh supports it. Similarly, in the case of Rohingyas migration and rehabilitation/return, India and Bangladesh have differing opinions.

There is also some rise in anti-India sentiments in Bangladesh owing to the Indian government’s perceived anti-Muslim and anti-Bangladeshi activities. India’s alleged interference in Bangladeshi politics, killings of Bangladeshis by our Border Security Force, National Register of Citizens (NRC) in Assam, Citizenship Amendment Act (CAA), rise of Hindutva in India and India’s reluctance to resolve the water disputes in common rivers is causing strains in the relationship.

In 2019, India passed the CAA, following which Bangladesh’s Foreign Minister AK Abdul Momen and Home Minister Asaduzzaman Khan canceled their trips to India. Later, minister Shahriar Alam also canceled his visit to India. Sheikh Hasina was critical of the CAA, describing it as “not necessary”. Though she has averred diplomatically that it is an “internal affair” of India, the issue can escalate when the Act is actually implemented, as it affects many Bangladeshi immigrants in India. When Modi visited Bangladesh last month, there were big protests in Bangladesh, which is said to have resulted in the death of at least 14 people.

Although on the occasion of the 50th anniversary of Bangladesh’s liberation, the Prime Ministers of both the nations exuded friendship and cordiality, major differences can crop up if the NRC and CAA, which are now on the back burner, are taken up by the Indian government.

The Modi government should work to revive the bonhomie with our neighbours, which formed a key aim of his world tour in his first term. Unfortunately, in the second term, the feathers of the neighbours are being ruffled for unnecessary reasons. It would be good for India if the bonds of friendships are back. Particularly with a country like Bangladesh, which India helped create. Like then, it would be good for us, from both strategic and economic viewpoints. 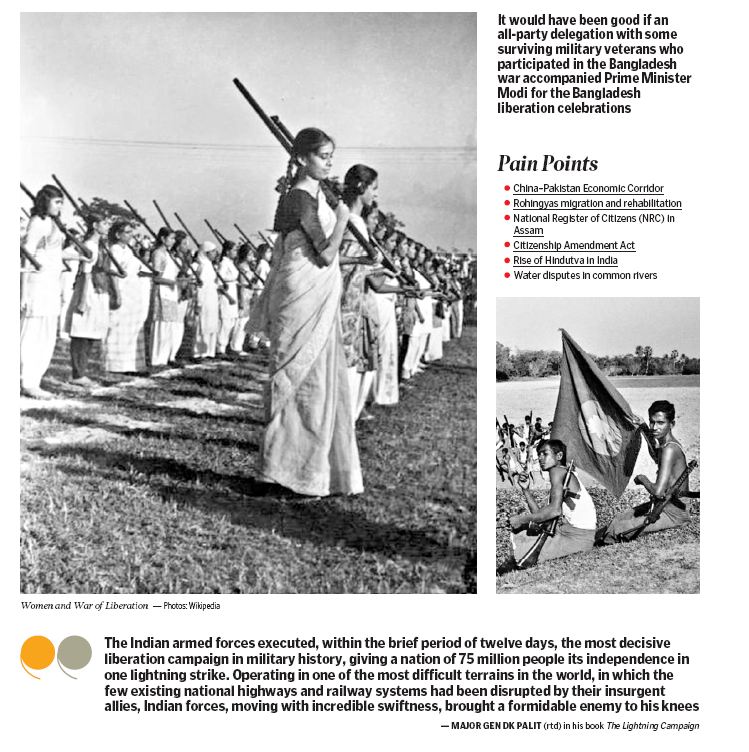