Odias arrived in the State (then unified AP) few decades ago. Most people came by way of Central Government postings, or in search of livelihood. From one or two families who came in the beginning, the community slowly grew in numbers and now clock up to one lakh members in the city.

“I came to Hyderabad in 1976. Since then, we have been practising the same traditions and culture that we used to follow in our hometown. We have also integrated ourselves with the Hyderabad lifestyle,” says Ajith Kumar Mohanty, retired DGP and chairman of Kalinga Cultural Trust (KTC).

Today, Odias are spread across fields as diverse as they come – bureaucrats, bankers, doctors, IT professionals, technicians, and workers in hotels, to name a few. What unifies them across different stratas is the ‘Jagannath Dharma’. Odias prefer to be recognised as followers or devotees of Lord Jagannath. The Puri Jagannath Temple located in Banjara Hills constructed in 2009 is a testament to that belief.

Celebrations at every turn

There is a saying in Odia, ‘Baarah maase, terah pooja’ (12 months and 13 festivals), a sort of tip-off to the many festivals observed by the community. Their biggest festival is the Rath yatra which is celebrated on a grand scale. Other important festivals are Durga Puja,  Chandan Yatra, Mahabisuba Sankranti, Ganesh Chaturthi, Savithri Amavsya, Saraswathi puja, etc.

However, one of their more interesting festivals is the Raja Parba — a four-day-long festival which is meant to bring prosperity to agriculture fields and celebrate womanhood. The festival is dedicated to Basu Mata, the Earth Goddess. All agricultural activities are stopped at this time, as it is believed that the Goddess undergoes her menstrual cycle. Activities such as ploughing, plucking, cutting trees which can affect nature are avoided. “This festival is exclusively meant for the girl child and women in the family. They say, the girl should be given complete rest and not allowed to do any work in this period,” explains SK Chhottray, Rtd IFS officer and one of the trustees of Jagannath Temple Hyderabad, who came here in 1986.

Odia community’s month begins with Purnima (full moon) and not with Amavasya. With many new-age additions, Odia marriages are also very interesting to watch, and have certain significance to every ritual. In a typical Odia wedding ceremony — the Haatha ganṭhi, where a garland made of mango leaves which is considered a holy symbol is bound around the bride and groom’s hand and tied with a thread, and they take their vows, is considered prominent. Later, the bridegroom takes seven rounds around the holy fire, to the chant of mantras.  Like other Hindu brides, the Odia bride wears sindhoor, red and white bangles and toe rings signifying her marital status.

The Odias give a lot of importance to marriage system; they respect the women and feel as if Goddess Lakshmi is entering their home. “If a person dies as an unmarried, their 13-day rituals are not conducted. Similarly, if anybody commits suicide, even their post-death rituals are not performed by the family members,” says Narahari Biswal, Rtd Income Tax Commissioner, who has been associated with the Kalinga Cultural Trust since 2009 and is also the present president for the managing committee of KCT.

A region where food veers towards the simpler side, Odia households never compromise on taste. Their food is lightly spiced which ends with a sweet.

“Mustard is among the main ingredients used in cooking. Most of the sweets are made with milk and chhenna (broken milk). Chhenna Poda, Rasgulla, Chhenna Jhilly, rice kheer are pretty famous throughout India. After Karthika Purnima, Odia women don’t consume non-vegetarian food for a whole month. So, on that day, we organise a community dinner or lunch and prepare all types of non-vegetarian dishes to compensate,” says Saritha Chhottray, smiling. She further adds, “Apart from egg, mutton and chicken, fish is consumed a lot, and almost all non-vegetarian dishes are cooked along with potatoes which is typical to Odisha.”

Dahi Macch is a popular dish prepared during weddings. The bridegroom takes the biggest fish available in the market on that day and sends it to the bride’s home along with curd in a matka (pot). They prepare this Dahi Macch with curd and mustard. There is an abundance of seafood in their cuisine – one finds sumptuous dishes such as Elsa Jhol, Konkoda (crab curry), Chilka, Chungudi tarkari (prawns). Mutton aloo jhol will get any Odia salivating over the prospect.

Vegetarians are not far behind in their variety; there is Dalma, Santhula (finely chopped vegetables which are sautéed with garlic, green chilies, mustard and spices. It has several variations). “You will also find a lot of Alu potala rosa (curry made from potato and parval), Kadali manja rai (Banana plant stem curry with oodles of mustard seeds) and Ouu (elephant apple) dish which is a seasonal fruit that arrives during November,” says Saritha. 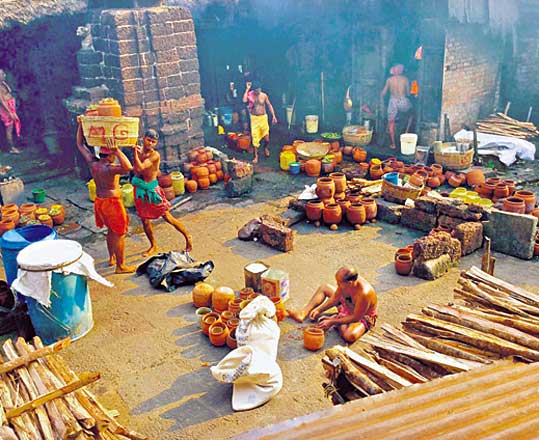 Lord Jagannath is an incarnation of Lord Vishnu.  The idol of Jagannath is made with the bark of the neem tree of a darker reddish colour. Perhaps, this is the only temple where the deity is seen with his brother Balram and sister Subhadra.

It is believed that Balram is an incarnation of Adi Sesha, A closer look at the top of idol reveals a hood of the serpent and Subhadra of Goddess Shakti. This is the only temple in India where the Mool vigraha (main idol) is brought into procession.

Tarakasi is a type of silver filigree work from Cuttack, Odisha. This highly skilled art form is more than 500 years old and is traditionally done by local artisans in the eastern shores of Odisha. Presently, the silver filigree workers largely belong to the district of Cuttack, where the art flourishes.

Odia language: The language is over 1,500 years old, and is certified as a classical language by the Government of India. “Odia has a strong connection with Sanskrit, Dravidian and Munda” says, Panchanan Mohanty, professor, UoH.

A slice of culture

In the varied landmarks and historical monuments that dot the city landscape, the Jagannath Temple has come to be known as one of the famous landmarks of Banjara Hills. Listed by Telangana Tourism as a special attraction, this wonderful architectural marvel was developed under the Kalinga Cultural Trust. 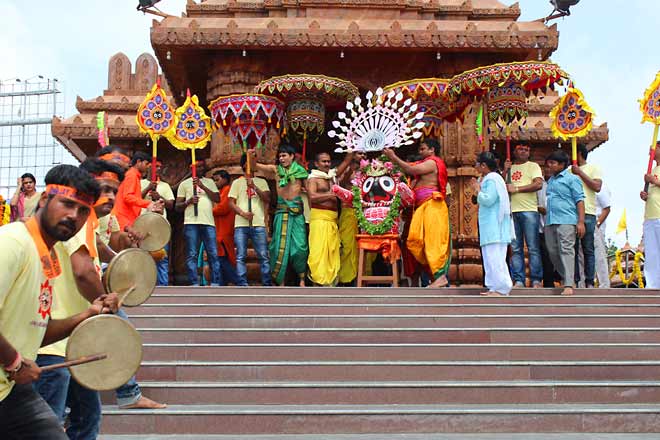 The Kalinga Cultural Trust was formed in 1994, with a clear objective to promote art, culture, religion and developing the society. The need for a cultural centre was realised by Odia community members who had been residing in the city for a long time. So, they approached the State Government of Odisha, who, in turn, approached the State Government (then unified Andhra Pradesh) for allotting some land for constructing the Trust. “The 5,000 sq yards of land in Banjara Hills which used to be on the outskirts then was shown to us and we purchased the land. We built the Kalinga Cultural Trust building and later constructed the temple, the pillar for which was laid in 1998. The actual construction started in 2004 and completed in 2009,” says Senapathi Vijay Kumar, general secretary, Kalinga Cultural Trust.

The Trust organises Kalinga Natyotsav every year, where they promote every art form. “We do a lot of social work, help the underprivileged children by giving books, food, clothes, and construct toilets, apart from conducting competitions in various fields. We also donated 500 ceiling fans to schools that needed them and provide financial assistance to any Odia community member suffering from an illness who can’t afford the medical fees,” explains Senapathi.

The Trust also has dedicated committee members who serve the organisation without any commercial interest. Chairman Ajith Kumar Mohanty, who served as the Director General of Police, and is now Advisor to the Governor of Telangana, was instrumental in the development of the Jagannath Temple. “He took personal interest in developing the Trust and temple. His ideas and hard work are the result you see today,” says Senapathi.

The Trust runs on ethical and moral values, and has no hidden agenda. “We have a function hall which is given for free, once a month, and is used for non-commercial programmes. Since the Trust is located in a prime locality, we can charge those who want to use the premises. But, if anybody wants to perform, promote or spread awareness about any art or literary forms, we let them use the premises free of cost,” explains Senapathi.

The temple is considered to be one of the best maintained places in the city with a working staff of 40. A big attraction is the sound and light show which explains the mythological story of Jagannath, which is organised every Saturday, Sunday and on holidays. The Hindi version is slotted between 7 and 7:30 pm and Telugu version between 7:30 and 8 pm. Another Jagannath Temple has also been constructed in Bolarum. “More than 30,000 Odia families are staying there. The Trust has been instrumental in ensuring there is ample support for promoting the culture,” concludes Senapathi. 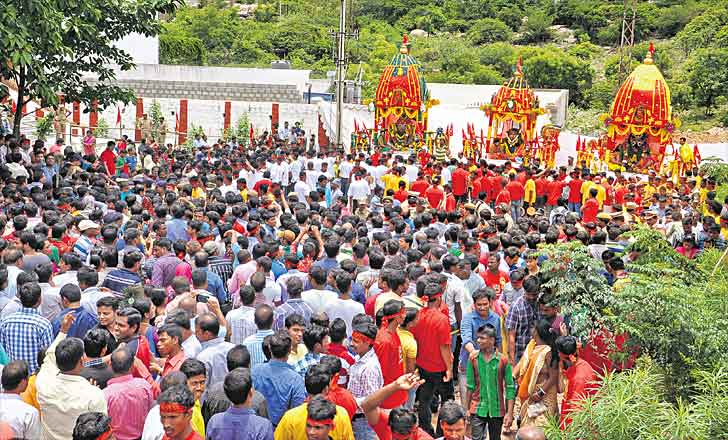 There is a reason the idols of Lord Jagannath, his brother and sister have no hands, legs or ears.

When King Indradyumna went to perform yagna in Nilagiri, God appeared in his dream and informed him that he will appear in the form of Daru (neem log) in the sea where the shankha, chakra, gada, and padma will be visible. He told the king to make four idols and worship them. The next day, the king received information that a reddish wood log was found floating in the water with the same signs.

The Daru was brought, and an old Biswakarma (carpenter) came forward to make the idols, claiming to have been sent by the God. He instructed the king not to enter the room for 21 days. But, after 15 days, when no sound was heard from that room, the king became anxious and opened the door, and found only unfinished idols as the Biswakarma vanished. As the king regretted his actions, a divine voice told him to install the unfinished idols and the Lord will make himself visible to the devotees in this form. Ever since, the idols of Lord Jagannath, his brother Balram and sister Subhadra are worshipped in this unfinished form.