From the towering hills of Yadagirigutta to the majestic Surendrapuri and the first of its kind Mahatma Gandhi Temple or the popular Kolanpaku Jain Temple and the Chaya Someshwara Temple to the historic Cheruvu Gattu temple, Nalgonda has a veritable fare for spiritual tourists.

There are several shrines for Hindu gods and goddess but there are very few shrines built for noble men and great leaders. Eight kilometres from Nalgonda and 75 km from Hyderabad, there is one such unique shrine, the Mahatma Gandhi Temple in Pedda Kaparthy village near Chityal town in the district.

The Father of the Nation is worshiped here as a god with devotees coming here to seek blessings and offer prayers. There is a meditation room, built as part of the building. The temple has been built on four and a half acres of land, with plans afoot to further develop the shrine complex with spiritual and peaceful attributes.

Believed to be 2,000 years old, it was crafted out of red sandstone and the pillars made out of white marble. The structure of the temple was renovated about 20 years back by Jain communities of Rajasthan, Andhra Pradesh and Gujarat.

The shrine, located in Kolanpaku village close to the ancient town of Aleru Mandal, is 78 km from Hyderabad and is well accessible by road while Aler is near the nearest railway station.

At a distance of four kilometres from Nalgonda bus station and 104 km from Hyderabad, is the Chaya Someswara Temple. It is an interesting pilgrimage and historical site to visit in Nalgonda.

On top of the hill in Cheruvu Gattu, there is the famous Lord Shiva Temple which reverberates with Hara Hara Mahadeva and Om Namaha Shivaya chants.

Sri Parvathi Jadala Ramalingeshwra Swamy is the presiding god at the sanctum shrine of Cheruvugattu Devastanam. This is also known as Apara Srisailam of Telangana located in Cheruvugattu village in Narketpalli mandal.

This temple has a unique feature of celebrating 12 Amavasyas (New Moon) and Poornimas (Full Moon) as periodical festivals, hence pilgrims refer to the temple as a must visit destination, at least once in a lifetime. On every Masa Shivaratri (the day before Amavasya) lakhs of devotees come to the temple.

This temple is 80 km from Hyderabad city on NH9 and is well accessible by road.

The temple popularly known as Yadagirigutta is devoted to Lord Narasimha Swamy. Yadagirigutta is a unique and pleasant hillock that enjoys moderate climate in all seasons. The place witnesses a heavy rush of devotees, performing pujas, kalyanam and abhisekam while the crowd grows substantially during weekends, holidays and festivals.

The temple town has facilities for accommodation of pilgrims while many tonsure their heads after fulfilment of a wish. There are many restaurants here for the devotees while the Devasthanam Board has provided other amenities for the public including special darshan, kalyanam, providing prasadams.

It is situated over a hillock 6 km from the Raigir railway station, 13 km from Bhongir and around 60 km from Hyderabad. Haritha Hotel offers quality accommodation with well-maintained rooms, restaurant and other best facilities provided by Telangana Tourism. 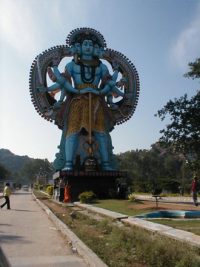 Surendrapuri, which has become popular for its well-maintained mythological museum is a unique destination.

The museum, known as Kunda Satyanarayana Kaladhamam, is also called the Mythological Awareness Center. It is a spiritual theme park which features walkways and more than 3,000 statues and offers a delighted tour of the Hindu epics.

The architecture of the temple and the sculptures lend an aura of spiritual bliss. The place is also home to a unique ‘Navagraha Temple’ with a separate temple for each of the navagrahas, in their relative positions. The deities appear along with their divine consorts and vahanas.

The dramatic war scenes between Rama and Ravana in Ramayana and between Kauravas and Pandavas in Mahabharata, are carved and portrayed in great detail.

The other major attractions of Surendrapuri are Nagakoti (101-feet Shiva Linga), as well as a 60-feet double-sided Panchamukhi Hanuman (one of the tallest idols of Hanuman).

It is located around 58 km from Hyderabad at the foothills of Yadagirigutta.