Hyderabad: Several innovators have contributed to the welfare of human society and here is a young lad from Hyderabad who also came up with an innovation of his own after seeing his grandmother suffer from Alzheimer’s disease.

Meet Hemesh Chadalavada, who invented a smart wrist band which can track human-beings at any time and also is designed as an application to support a device that can detect and sends a notification, just in seconds. The smart band has health sensors and pulse rate sensors connected to a gyroscope that automatically sends signals to the phone of the care-giver, he explains.

Hemesh’s tyrst with innovation took roots in the year 2019 when he visited his grandmother’s house for summer vacation. “I saw my grandmother wandering in the nights with no control over her senses. That is when I thought of developing something useful to her and started working on ideas,” he says.

The 14-year-old not only designed a device but also his ingenious mindset made him build several other projects such as pothole detector, a sensory software that detects potholes and sends signals through GPS, a smart seat belt/accident notifier, and a Robot for the elderly and the divyang. Detailed information on his works are available on his website – hemesh.tech.

“My parents supported me since my childhood and provided enough resources like the Internet and made me watch YouTube. I used to watch tech videos while I was in my 3rd grade,” he says.

The teenager participated in the ‘Intinta Innovator’ program conducted by Telangana government and got an opportunity to showcase his smart robot which promises care of the elderly and the divyang. Subsequently he took part in other competitions as well including ‘Ideate for India’. He was also awarded Macmillian budding scientist and was invited to IIT Delhi.

The tech geek says he keeps track on latest trends in technology and plays a lot of video games, cricket, and editing of videos, in his leisure.

Hemesh’s dedication towards technology made him involve in Machine Learning and software development, He is currently working on a web application project called ConsultFix which caters to professionals helping them communicate with their customers online. Through this online consultation platform, doctors, lawyers, business executives, etc can create their own links and interact with their clients.

Hemesh says he felt really honoured at receiving applause from IT Minister KT Rama Rao for the projects he had done in the beginning. Being chosen for ‘Bal Shakti Puraskar’ has been an inspiring moment for the teenager. “I also thank for encouraging tweets by Prime Minister Narendra Modi, Union Ministers Smriti Irani and G.Kishan Reddy. I can’t wait to receive my award which might be on the Independence Day,” he adds. 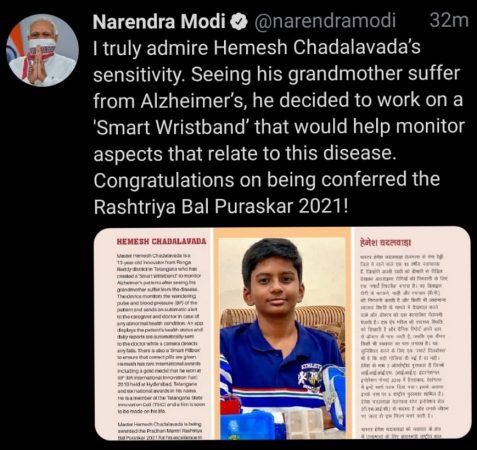