Hyderabad: In a major move aimed at making agriculture a more profitable venture through scientific cultivation based on market demands, Chief Minister K Chandrashekhar Rao on Tuesday said the State government has decided to implement regulated farming in the State from the upcoming Vaanakalam season, beginning with paddy.

As a first step towards the regulated farming, the Chief Minister said the government decided to take up paddy cultivation in about 50 lakh acres in the State commencing from this Vaanakalam season. Besides cultivating both fine and coarse varieties of paddy, Telangana Sona variety alone would be cultivated in about 10 lakh acres. It was also decided to cultivate cotton in 50 lakh acres and red gram in 10 lakh acres.

The decisions were taken at a high-level meeting held by the Chief Minister at Pragathi Bhavan on crop colonies and cultivation of alternative crops. The Chief Minister would hold a video conference with field-level officers to discuss the issues in this regard on May 15.

The State government also decided to promote the cultivation of vegetables in farmlands near urban areas. Farmers would be guided on varieties of vegetables to be cultivated based on location and extent of area.

Taking further steps to protect farmers, the State government decided to act stringently against those selling spurious and fake seeds. Observing that spurious seeds of cotton and red chilli were likely to enter the market, the Chief Minister directed flying squads to conduct surprise checks across the State commencing Wednesday. The Intelligence Wing would also keep surveillance on such cases. Cases would be registered under the Preventive Detention Act against those involved in the production and sale of spurious seeds.

In tune with the new Comprehensive Agriculture Policy, both the Agriculture and Marketing Departments will be revamped. While Prof Jayashankar Telangana State Agriculture University will conduct more research on the required crops for cultivation in the State, the Rythu Bandhu Samithis will actively coordinate with the farmers on all agricultural issues. Apart from simplifying maintenance of godowns in the State, the government will also take measures to increase the capacity of rice mills in the State. The Chief Minister will soon hold a meeting with the representatives of the Rice Millers Association in this regard. 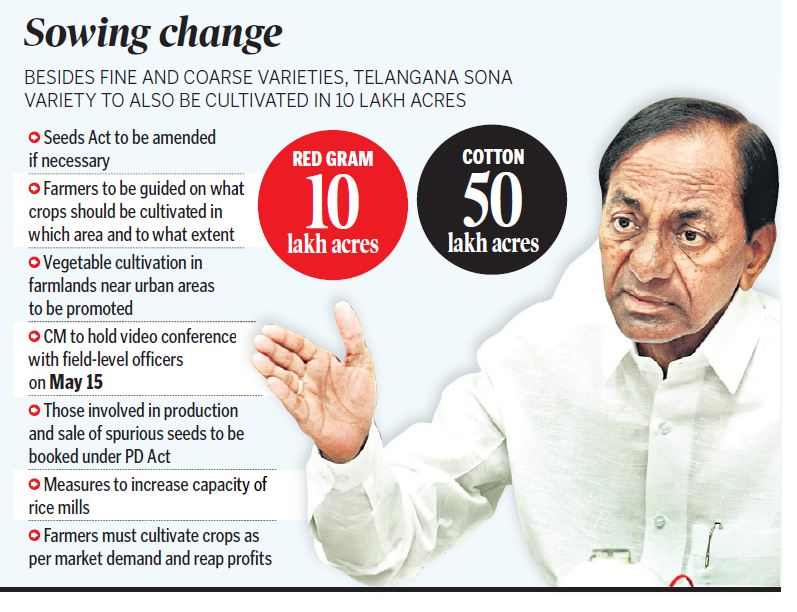 Further, Chandrashekhar Rao will convene a video conference with the field-level officials on May 15 and discuss the proposed regulated cultivation in the State to seek their suggestions. District Collectors, District Agriculture Officers, District Rythu Bandhu Samithi chairperson, Seed Development Corporation Officer and other district-level officers, besides mandal-level officers comprising Mandal Agriculture Officer and Agriculture Extension Officers, along with Rythu Bandhu Samithi chairpersons from mandal and village levels, will participate in the meeting.

Earlier, the Chief Minister observed that agriculture continues to be a major livelihood for a majority of citizens in the State as well as the country. While farmers were not getting remunerative price for their crop, he stated that people were shelling out huge amounts to purchase essential commodities. He emphasised the need to rethink and come up with a new strategy to make agriculture profitable for farmers.

“Unfortunately, none of the political parties which led the previous governments in India made no focussed attempts to bring agricultural reforms. But the Telangana government has been making numerous efforts to improve the conditions. Besides resolving all pending problems, we are bringing reforms to change the entire manner in which cultivation was taken up earlier,” he said. He pointed out that the State government had overcome power crisis and constructed several irrigation projects, besides purchasing the entire crop for Yasangi season during the ongoing Covid-19 crisis.

Chandrashekhar Rao reiterated that there was no other option but promote alternative crops through crop colonies to ensure the survival of farmers in the country. He attributed the lack of remunerative price for crops to cultivation of the same crop by all farmers without prior planning. “Farmers must cultivate crops to meet market demand. I have been suggesting this for the past 20 years to different national leaders, including Prime Minister Narendra Modi and Union Agriculture Minister Radhamohan Singh, but none acted on it. It’s high time we took the leap,”
he added. He wanted Telangana to become a role model in crop colonies for the entire world.

The Chief Minister said farmers cannot cultivate the same crop en masse and dump it in the market seeking a remunerative price. Instead, he wanted them to cultivate crops as per the market demand and reap profits. “The State government will guide farmers in choosing the crop to meet the market demand and accordingly, they should cultivate only these crops. Farmers must change their mindset and be prepared for constructive reforms in agriculture,” he added.