Kaghaznagar: Sirpur (T) MLA Koneru Konappa, who is known for his social services programmes and the development of his Assembly constituency, has come up with another innovative initiative. This time, he is providing three months of free coaching to 1,300 students who are keen on appearing for the Teacher Eligibility Test (TET) and Teacher Recruitment Test (TRT). He has roped in experienced faculty from two popular institutions of Andhra Pradesh and Warangal for this purpose to run two such training centres.

Meritorious students belonging to financially weak backgrounds and remote parts of the backward district are unable to secure government jobs as they can’t afford quality coaching even after pursuing professional courses such as B Tech, B Ed and D Ed, etc., But they now stand a good chance of passing TET and TRT after the coaching.

The Koneru Charitable Trust, a Kaghaznagar-based voluntary organisation run by the legislator, has engaged 16 experts from Pragati Academy of Avanigadda in Andhra Pradesh and Khammam-Bhadrachalam Teachers Academy from Khammam, paying them between Rs 10,000 to 20,000 per day. “Students from the town and other remote parts of Sirpur (T) Assembly constituency are as talented as students from Karimnagar, Warangal and other districts. But, they fail to secure teachers’ jobs unlike students from other districts. They can excel in the tests held by the government for filling the posts if they are provided quality coaching,” Konappa told Telangana Today.

The legislator said the study material costing Rs 600 would be given to each aspirant at the end of the coaching, which formally commenced on January 18. The students are given free accommodation and food, besides other facilities like sufficient toilets, lighting, drinking water, sanitisers, and seating facilities were created for the students, and a suggestion box has also been kept at the two centres for feedback from them.

The MLA further recalled that 21 candidates could get teacher jobs when he had offered coaching to 80 odd aspirants in 2017. As many as 37 candidates cracked posts of police constable and soldiers of the Indian Army in 2015. The trust would offer special training to 1,500 aspirants of jobs in Indian Army after February 20. Faculty members of institutions from Hyderabad would be hired for training the candidates, he added.

In order to provide the coaching, the trust is running two centres, one in Kaghaznagar town and another in Koutala mandal centre every day from 8.30 am to 5.30 pm. As many as 690 aspirants of Kaghaznagar, Dahegaon, Penchikalpet, Sirpur (T), Rebbena and Asifabad mandals are attending classes at the centre situated at MLA’s camp office in Kaghaznagar. A total of 610 candidates are undergoing coaching at a mini stadium in Koutala mandal headquarters.
The experts are imparting various subjects covered in the syllabus of both TET and TRT to the candidates. They assess the learning process by conducting tests every day between 8.30 am and 9 pm before starting the coaching. Toppers of the test are being felicitated by the legislator. A team of 20 retired teachers, lecturers and volunteers of the town is extending its support in evaluating the answer sheets and in operating the centres.

Besides this quality coaching, the aspirants are being fed sumptuous lunch and snacks at the centres for free. About 200 female and male candidates from interior parts of Bejjur, Penchikalpet and Chintalamanepalli mandal are being provided with accommodation facilities adjacent to the two coaching centres without charging a single penny.

Annam Himabindu, a native of Kaghaznagar town opined that the legislator had literally brought the coaching institute to their town, braving many odds. “I was forced to migrate to Avanigadda and had the coaching at Pragati Academy, spending a huge amount last year. But I am now able to undergo it by staying in my home town,” she remarked.

Shobhana, another aspirant, expressed gratitude to Konappa for offering the coaching in the town. She advised holders of B Ed and D Ed to utlise the ‘golden’ opportunity. She recalled that she had stayed in Warangal to take the coaching last year. “We are fortunate to get the facility almost at our doorsteps for free. Now we don’t need to migrate to Warangal, Karimnagar and Hyderabad,” she observed. 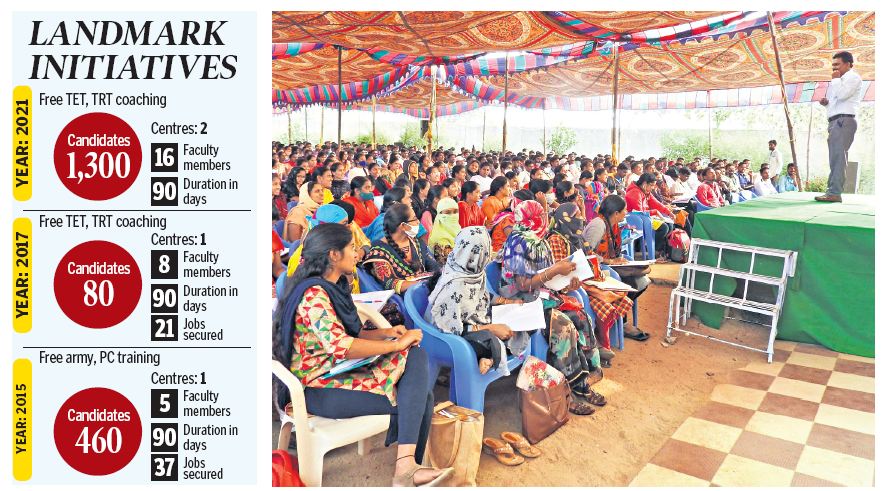 Konappa provided mid meal to 2,450 students belonging to junior colleges and 300 degree students for a period of five years and four months. The initiative improved the academic performance of colleges. Government Junior College in Koutala mandal centre stood top in the results of Intermediate in 2018 and 2019, by registering 96 and 97 per cent of pass respectively.

Konappa sponsored smart TV sets to 100 primary schools and five junior colleges with help of Chetana Foundation, a Khammam based voluntary organisation from 2018 to 2020. The gesture resulted in a drastic increase in enrollments of the institutions. For instance, Koutala GJC recorded 700 admissions in 2020.

The MLA had distributed 29,000 spoken English books to students studying Class VII to intermediate and wards of Ashram Schools helping improve the pass percentage of the pupils in English subjects from 2014 to 2020.

Konappa gave away laptops to 10 financially weak yet meritorious students who were struggling to attend online classes, with the help of Chetana Foundation in 2020. Students secured seats in an engineering course at premier institutions of Telangana and country

The legislator distributed 11,000 blankets to inmates of hostels from 2014 to 2020, bringing respite to the pupils who were unable to cope with chilly weather conditions. He installed reverse osmosis plants to ensure purified drinking water to students of junior colleges and government-run residential schools of the Sirpur (T) Assembly constituency.

Konappa launched Nityannadanam, a daily poor-feeding initiative meant for thanking the voters for electing him thrice, in Kaghaznagar in June 2020. The initiative was aimed at feeding 2,000 persons including passengers of TSRTC, visitors of the town, auto-rickshaw drivers and the poor a day. The initiative was stalled due to the lockdown. It will be resumed soon.

As many as 300 kilometers of the road network was laid against the total 450 kilometers of stretches, providing connectivity to 30 habitations deprived of the basic facility from 2014 to 2018. Works of 38 bridges across local streams and Peddavagu were commenced, improving accessibility of several interior villages. Similarly, a high-level inter-State bridge was erected across Pranahita between Gudem and Aheri of Maharashtra, spending Rs 56 crore.

Besides, the education sector was improved by establishing eight residential schools. Bejjur primary health centre was upgraded to a 30-bedded hospital, while the community health centre of Kaghaznagar town was converted into a 100-bedded facility. Two new mandals, Chintalamanepalli and Penchikalpet, and Kaghaznagar revenue division were created for simplifying administration.

A total of 3,000 new electric connections were provided to farmers in the last four years as against 3,800 connections given in the past 60 years. Warehouses were built for five mandals for helping the agrarian community to store their grains. Two more warehouses would be constructed for the remaining two mandals soon.

Due to the sustained efforts of Minister K Taraka Rama Rao, a vital role played by Konappa the sick Sirpur Paper Mills (SPM) was revived in 2018. The reopening of the paper manufacturer brought respite to 10,000 people directly and indirectly depending on the mill. Residents of the town and workers of the paper manufacturer were relieved a lot with the restart of the company.