Hyderabad: The Telangana State Election Commission announced on Thursday that only five members including the candidate and excluding the security personnel would be allowed to take up door-to-door campaign for the municipal elections in view of the rapidly increasing number of Covid-19 cases.

The State Election Commissioner C. Parthasarathi, in the Covid guidelines he issued for candidates to follow during the election campaign, also said the convoy of vehicles should be broken after every two vehicles excluding security vehicles, if any. At least 10 metres gap has to be maintained between two sets of convoy of vehicles. “We will implement these guidelines strictly,” Parthasarathi said.

There should be at least 30 minutes gap between road shows of two different political parties or candidates on the same route. Public gathering or rallies may be conducted with strict adherence to Covid guidelines, he said.

All the polling stations will be sanitized a day before the elections, preferably before the arrival of the poll party.

If polling agent or counting agent displays any Covid 19 symptoms, then the Presiding Officer or Returning Officer should permit a reliever, who will keep a record accordingly.

Voters without masks will not be permitted into polling stations. To facilitate identification, voters have to lower their masks, whenever required.

Person with more than two children permitted to contest elections

Clearing the uncertainty over the children clause, the State Election Commission said a candidate with more than two children is eligible to contest the elections to municipalities and Municipal Corporations except GHMC.

Among the seven Urban Local Bodies (ULBs), which are going to polls on April 30, the number of women voters, is higher than men voters in five ULBs.

There are 12 national, State and other State political parties registered with Telangana State Election Commission (TSEC).

In addition to these, there are 49 political parties registered with TSEC without reserve symbols, including film actor-turned-politician Pawan Kalyan’s Jana Sena Party.

Following complaints lodged by political parties in the past regarding some symbols bearing close resemblance to their respective party symbols, the TSEC issued a list of 50 free symbols, which do not have any similarity with the symbol of any political party.

During elections in the past, some symbols like road-roller and rolling pin allotted to independents had striking similarity with the ‘Car’ symbol of the TRS, and this was reflected in the voting pattern. The party had appealed to the TSEC to ensure such symbols are not allotted in future elections.

In the list of free symbols announced this time, there is no road roller or rolling pin. 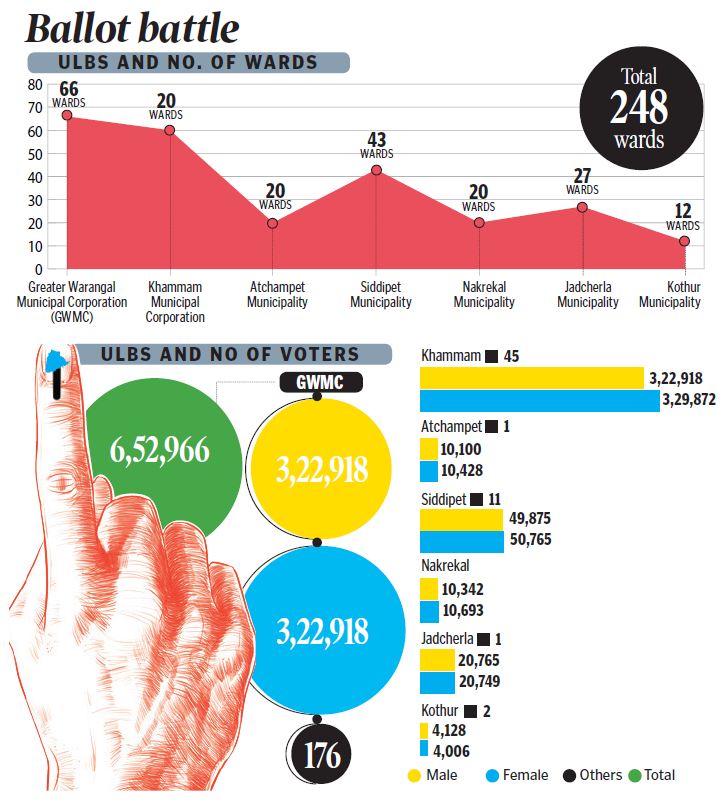