Hyderabad: IT exports from Telangana is expected to grow over 7% to touch Rs 1.4 lakh crore (about $19.1 billion) for the financial year 2020-21. In contrast, the national growth rate in the said period, according to Nasscom, is estimated to be just 1.9% at $150 billion.

In the past three quarters, IT exports in Telangana grew by five to six per cent. “The fourth quarter is expected to clock better performance and the total growth rate could be about 7-8%,” said CVD Ramprasad, Director, STPI, Hyderabad. STPI is an autonomous society under the Ministry of Electronics and Information Technology.

In fiscal 2019-20, IT exports from Telangana stood at Rs 1.28 lakh crore, which was a growth of 18% over the previous financial year. The sector then created 40,000 new jobs to take the total number of direct employment to 5.82 lakh. Then too at 18%, Telangana grew twice the national average.

The IT industry across the country added 1.38 lakh people to its workforce on a net basis during the current fiscal, taking the total number of employees to 44.7 lakh, according to Nasscom.

“We are seeing a positive trend. If we take three quarters till December which we can talk about now, exports from Telangana have grown already by 5-6%. We expect higher growth in the last quarter ending March. So far, the State’s IT exports growth rate has been higher than the national trend and we expect the same to continue,” said Ramprasad. 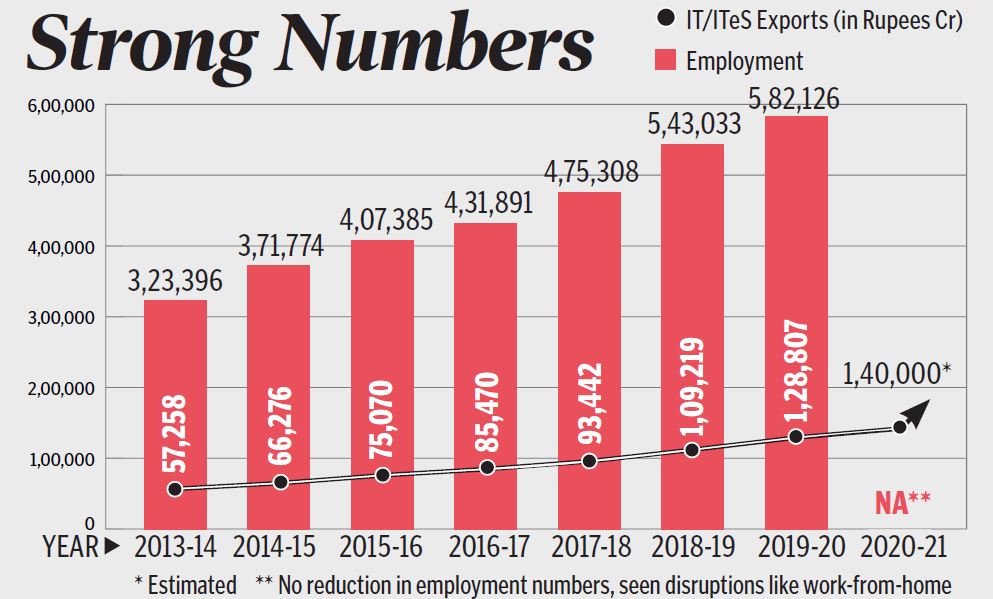 Telangana’s IT industry last financial year (2019-20) saw 40,000 net additions to the workforce. However, this financial year, Ramprasad said, it will be difficult to arrive at an exact number due to new models like work-from-home and work-from-anywhere.

“The employment numbers have not come down. There are disruptions in the way the work is being done. Physical operations at the office level have been scaled down due to Covid norms. Many companies retained the staff and there is a demand for specific skills as well,” he said.

According to Nasscom, over the past few years, the IT industry has been clocking a revenue growth in higher single digits or double digits as the demand for IT services continued to grow on the back of digitisation. However, the pandemic led to a sharp dip in growth hitting spends on technology. The lockdown also led to concerns over delivery as work shifted from campuses to homes.