The production touched about 40,000 tonnes per month in February and March this year, which is expected to continue in April and May resulting in a bountiful catch this year as well.

As per official estimates, Nalgonda district recorded the highest fish production in the State with 19,921 tonnes, followed by Suryapet with 18,485 tonnes and Mahabubabad with 17,063 tonnes. 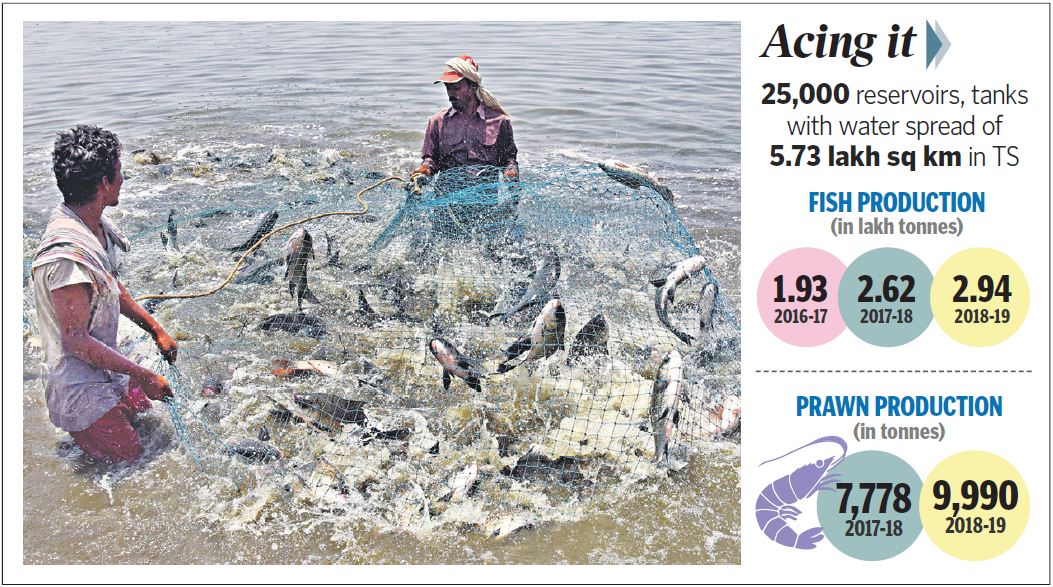 According to a report tabled in Parliament last year by the Parliamentary Standing Committee on inland fisheries and aquaculture, inland fishery accounts for about 65 per cent of India’s total fish production. Telangana has nearly 25,000 reservoirs and tanks with a water spread of 5.73 lakh sq km.

Prior to the State formation in 2014, the fisheries sector was mainly concentrated in the Andhra region of the undivided State of Andhra Pradesh. But, after Telangana came into being, the new government focused on promoting inland aquaculture in various water bodies, including reservoirs and tanks.

“In the 2018-19 fiscal, about 70 crore fish seedlings were released into various water bodies in the State, which is about 45 per cent more than the 2017-18 fiscal when around 50 crore seedlings were supplied. But, fish production could not reach the target of 3.4 lakh tonnes fixed by the Fisheries Department for the financial year due to inadequate water in the reservoirs, tanks and other water bodies,” an official of the Fisheries Department told Telangana Today.

Apart from helping increase the production, the State government is also providing the fishermen with dragnets to improve the catch. Vehicles equipped with insulated boxes are being supplied to enable them transport the catch and sell it.

Officials said Telangana, which was importing fish from neighbouring Andhra Pradesh for several decades, was now exporting fish to other States.