Hyderabad: Stepping up the vigil against the Covid-19 pandemic, Station House Officers (SHOs) of many police stations across the State have decided to allow only one person into the premises at a time to lodge a complaint and that too, if he or she is wearing a face mask.

A few SHOs have put up vinyl flex banners in villages detailing the safety measures to be taken by complainants before stepping into the police station. The move is aimed at sensitising villagers, particularly farmers who approach the police disputes regarding their agricultural lands. 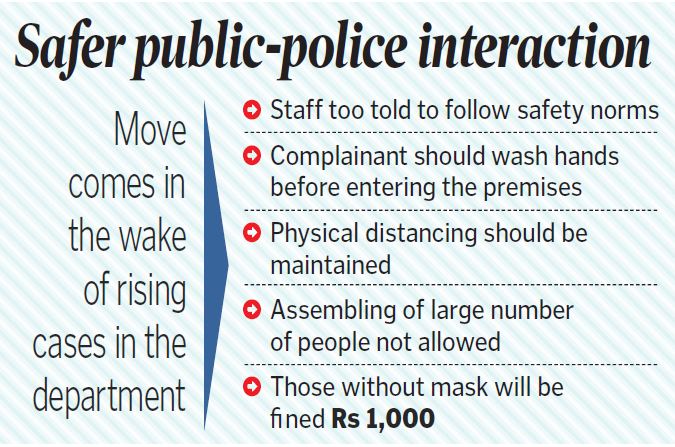 “We receive several complaints over petty quarrels on agricultural fields during the Kharif season. In the process, many people assemble at the police station. In order to prevent such gatherings outside the police station, we are allowing only one person onto the premises,” Kamalapuram Inspector D Raviraju said.

According to senior officials, the police personnel were also asked to abide by the Covid-19 safety norms. Before joining duty, every person must undergo thermal screening to check the body temperature apart from wearing masks and regularly washing their hands either with a soap or sanitiser.

The police department is according priority for the safety of the staff because more than 250 police personnel, mostly in Hyderabad, Cyberabad and Rachakonda police commissionerates, have already tested positive for the Covid. Three senior IPS officers working in the city were also among those who tested positive for the deadly viral disease.