A continuous war of words with Pakistan on some or the other issue is something Indians are accustomed to. We have also come to accept that we share good relations with all our other neighbours. Though we fought a war with China and share a disputed border, of late Indians were opening up to Chinese products, especially mobile phones. In fact, according to India’s official ranking of foreign direct investment (FDI) inflows, China is among the fastest-growing sources of FDI in India, improving from 35th position in 2011 to 17th in 2016.

But China’s deepening relationship with Pakistan, projects such as the China-Pakistan Economic Corridor (CPEC), not backing India’s appeal in the United Nations to ban Jaish-e-Mohammad chief Masood Azhar and blocking India’s entry into the Nuclear Suppliers Group (NSG) have resulted in a trust deficit between the two large neighbours in recent times.

Amid this simmering discontent comes the Doklam stand-off, which started off with China building a road in the Doklam plateau in Bhutan. The plateau holds immense importance to India as it is geographically close to the Siliguri corridor, the road that connects the Northeastern States (NES) with the rest of the country. The closer China gets to the corridor down the Chumbi Valley, the better equipped it would be in a war to cut India off from the NES.

Sensing the security threat, India has blocked the construction of the road, confronting the Chinese troops and bringing the two armies face to face. Both India and China have minced no words since the standoff began in June and neither is ready to blink. Instead, it is taking a turn for the worse, undoing the ‘Panchsheel Treaty’ completely.

India was the first non-socialist bloc country to establish diplomatic relations with China in 1950. However, the ties deteriorated following a disputed territory along the 3,290-km-long Himalayan border, with China launching simultaneous offensives in Ladakh and across the McMahon Line on October 20, 1962. The war ended on November 21, 1962, after China declared a ceasefire.
The seriously damaged ties were revived with then Prime Minister Rajiv Gandhi’s landmark visit in 1988 to China. Since then, efforts from leaders from both the sides have strengthened the economic ties but the border issues remained unsettled, though on the backburner.

While China keeps claiming parts of Sikkim, Arunachal as well as Kashmir, India has strongly opposed its neighbour.

The 81-year-old Tibetan spiritual leader’s nine-day visit to Bomdila in West Kameng district of Arunachal Pradesh this April left China fuming. China, which claims some areas of Arunachal Pradesh, had warned that if India allowed the visit of the Dalai Lama, whom it calls an ‘anti-China separatist’, it would cause ‘serious damage’ to the ties.

Though India confirmed that there was no political angle behind the visit, the Chinese Foreign Ministry’s displeasure over the issue was evident from its official statement. “In disregard to China’s concerns, India arranged the visit of Dalai Lama to the disputed areas. The arrangement of Dalai’s visit to the disputed area by India runs counter to its commitments on issues related to Tibet and runs counter to benefits of bilateral relations. We demand that India stop this wrong action,” it stated.

India’s boycott of the One Belt, One Road (OBOR) initiative in May has soured the relationship. While China is pushing hard to implement this ambitious infrastructure project involving an estimated $5-trillion across Asia, the Middle East, Europe, and Africa, India is equally steadfast on its unwillingness to participate in it.

No Entry to Manasarovar

In the last week of June, China denied entry to Indian pilgrims travelling to Kailash Manasarovar through Nathu La, in Sikkim.

Though speculations were rife that the Chinese military’s act of preventing the yatra was in protest against the Doklam stand-off, in a recent statement, Chinese Embassy spokesperson Xie Liyan said the trip is an important part of China-India people-to-people cultural exchanges and that alternative arrangements would be made through different routes for the convenience of the pilgrims.

The statement eased the situation but the continuing closure of the traditional route has made India suspect China’s intentions.

The Doklam plateau, at the tri-junction of India, Bhutan and China, is the latest flashpoint between the two countries. It began in the first week of June when the Indian military resisted the China’s People’s Liberation Army’s attempt to build a road in the disputed area. 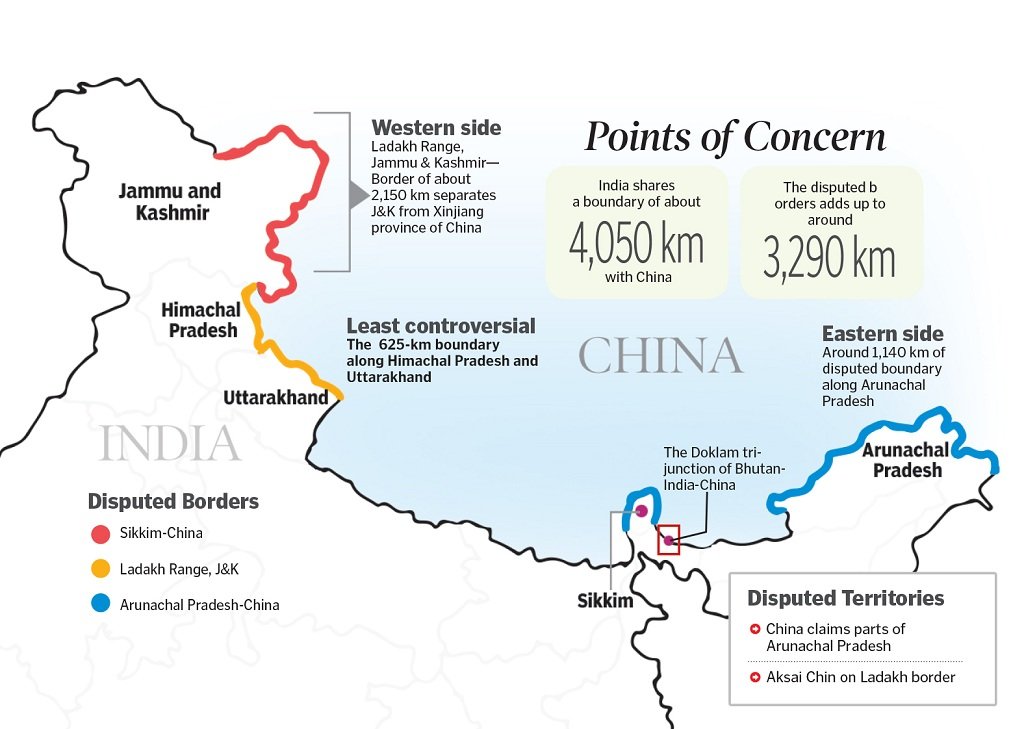 Since then, China has repeatedly asked India to withdraw its troops from the area as a precondition for ‘meaningful dialogue’ to settle the boundary dispute and has warned that India has no business getting involved since the area belongs to Bhutan. China also warned that India should learn ‘historical lessons’.

India replied in equal measure to this taunt. “If they are trying to remind us, the situation in 1962 was different and India of 2017 is different,” retorted Defence Minister Arun Jaitley without mincing words.

“He is right in saying that India in 2017 is different from 1962, just like China is also different. This time is utterly different in nature from the previous frictions between the two sides at the undefined sections of the China-India boundary,” pointed out Geng Shuang, a spokesperson for the Chinese Foreign Ministry, showing that neither side is ready to back off.

In spite of the continuing tension, Prime Minister Narendra Modi and Chinese President Xi Jinping looked at ease with each other when they shook hands and exchanged greetings at the recently concluded G20 summit at Hamburg in Germany. This seems to have provided an opening to cool things down and resolve matters amicably.

Foreign Secretary S Jaishankar recently said, “India and China have settled many such disputes in the past and there is no reason why they can’t do so again.” China, however, does not seem to be reciprocating in the same spirit and looks like it may take a little longer for things to get back to normal.