Warangal Urban: Former Union Minister and son of late Prime Minister Lal Bahadur Shastri, Anil Kumar Shastri on Thursday stressed that the laws that were passed by the British colonial government must be amended as per the present day requirements. He reminded that late Prime Minister Lal Bahadhur Shastri had appointed Administrative Reforms Commission (ARC) in an attempt to ease the laws.

Addressing teachers and students on the occasion, Anil Kumar recalled his father’s services to the nation and his integrity and said that the popular slogan ‘Jai Jawan -Jai Kisan’ given by Lal Bahadhur Shastri is still relevant. “As farmers in the country are still facing hardships, and Pakistan and China are posing a threat to our nation’s security, the philosophy of Lal Bahadur Shastri is still relevant,” he added. 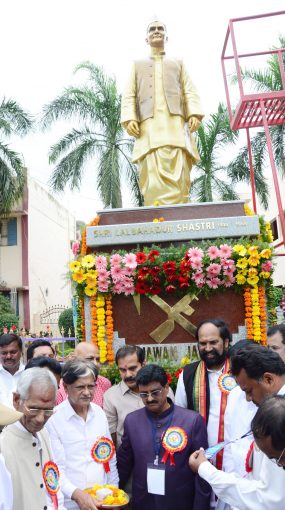 Stating that the common Indian citizen ended up violatating at least 10 laws from morning till evening every day due to the rigidity of laws, Anil Kumar said that the laws must be simplified as per the present needs.

“About  96.7 per cent of the laws which are in force were made during the British Raj. They must be simplified. But the successive governments have not done much to this effect,” he opined, adding that his father was a man of integrity and above all political affiliations.

“Self-respect and self-dignity were two virtues possessed by my father Lal Bahadur Shastri,” he said.

Anil Kumar appreciated college principal Dr K Satya Parameshwar for his efforts to convince the retired teachers and alumni of the college to set up the statue of Lal Bahadur Shastri.