Hyderabad: This is the digital era… The world is no longer what it used to be, and it takes courage and flexibility to embrace that change. And Sanjay Reddy had all of that to create his digital company in Hyderabad ‘Silly Monks Entertainment’, five years ago along with his co-founder Anil Pallala.

Born in Secunderabad to an Army family, his early life was strictly disciplined and punctuality came by his virtue. He finished his schooling from Kendriya Vidyalaya, Allahabad, in the year 1985 with a major in Economics and Geography. He passed his graduation with distinction with a major in Economics and Statistics. He then did his management degree in Marketing & Finance from University of Pune.

Sanjay Reddy started his career with a media job and served in both print and electronic media across genre (entertainment, sports and kids). Very early in his working life, he started thinking about creating sustainable income for future as he did not have a possibility of pension like his father. He began making investments in real estate in places of his transfer like Hyderabad, Delhi and Mumbai, sold them when there was appreciation and reinvested that money there by creating rental income to make the family future secure. 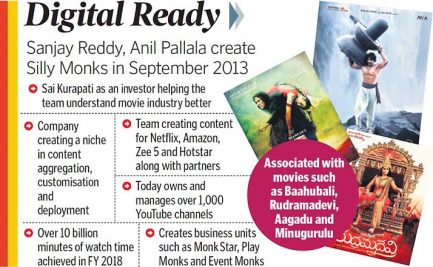 “Coming from a family that had roots in agriculture and defence, I never felt business was in my DNA. But I drew a lot of inspiration from Zee Group founder Subhash Chandra. I look at him as my Dronacharya and myself as Eklavya. He never taught me directly but I learnt a lot from him. In 2012, when I moved out of Zee having exposure to the southern market, I wanted to start a regional channel and this needed Rs 250 crore, and no investor was ready. This attempt went on till mid-2013. Then I happen to meet my co-founder Anil Pallala who came with digital entertainment background and Silly Monks was born,” he said.

Reddy added, “When we were beginning our entrepreneurial journey in 2013, we estimated that our business would need Rs 67 lakh in the first year and we will be able to break-even the next year. One of my friends was looking to buy a car, so I sold my Audi and took an advance from him and also put one of my flat for sale, thinking that it will fetch me around Rs 70 lakh that was needed to run the operations for the first year. In a month’s time, one of my friends asked me to meet up with Eega movie producer Sai Korrapati to find out if he is interested to invest in our venture. I met Sai, explained him the business plan, and told him that the company’s valuation is Rs 10 crore and asked him to invest Rs 1 core (10% of the valuation) into the venture. He agreed and invested. I went back to my friend, returned the advance and took my Audi back as it was very dear to me. From the time the company has been incorporated, there has been multi-fold growth in its revenues year-on-year.”

Silly Monks today focuses on content aggregation, customisation and deployment of content both in audio and video format for digital platforms, mobile carriers, music stores etc. The company is working with digital platforms such as YouTube, Jio, Netflix, Facebook etc. and creating content for Amazon, Zee 5, Vuclip and Times. It will tie up with more content creators and focus on short films, web series and feature films.

Silly Monks currently owns and manages approximately 1,000 YouTube channels delivering over 400 million views per month. It has close to 21 million subscribers on YouTube. The company reported 1.3 billion minutes of watch time in August 2018.

It has also been associated with blockbuster movies such as Baahubali, Rudramadevi, Legend, Mahanati and many more. Sanjay Reddy has acted in about 20 movies till date, with three of them due to release. “We have entered into movie production. Our first movie is 24 Kisses, directed and co-produced by Ayodhya Kumar Krishnamsetty. Second movie is under production. We want to make movie as a product. We are looking at how to monetise on various platforms there by making it a profitable business. Having Sai Korrapati as an investor helps in planning our distribution better,” he informed.

The company has created studios in Hyderabad, Chennai and Cochin. It will be opening a studio in Bengaluru in October. Every southern city will have a studio in future. Within the Silly Monks umbrella, the company has launched a unit (Monk Star) that works in Indie Artist.

“We have become a disruptor, as in south we don’t have many professionals with our kind of exposure. We also wanted to be a legally compliant company from day one. We had been showing growth year-after-year and I wanted to go public, which happened in January 2018,” he informed.

Silly Monks listed its shares on the National Stock Exchange in January this year. The company’s Rs 15 crore IPO issue was oversubscribed 22 times. “I was expecting three times over subscription. But to my surprise, we went 22 times over in the final 2 hours. Probably, people took fancy to digital business. From there on, we saw opportunities to grow even inorganic. We acquired an animation company. We started investing in content be it web series, feature film, audio etc.”

The company has recently acquired 51 per cent stake in Chintala Sports Private Limited. Chintala Sports (PlayMonks) is the curator of Telangana Premier Kabaddi League (TPKL) which is in its second season. The company will also look at corporate sports championships, other sporting leagues and other opportunities under Play Monks.