Mirror-work has traditionally played an important role in décor of all kinds and Rajasthan and Gujarat can be credited with introducing the world to innovative methods of using mirrors. A mirror was first used as an embellishment on the exterior walls. This type of work can still be seen in remote villages in the two states. Mirrors as wall décor was probably introduced by traders, arriving over land and sea, from Europe and Persia.

The use of mirrors in garments is now universally known, and designers of high fashion garments the world over have been experimenting with mirror work for the past decade. However, the intricate mirror work used in decorating walls, such as the hall of mirrors or Sheesh Mahal at the Amber Fort in Jaipur, is less widely known. 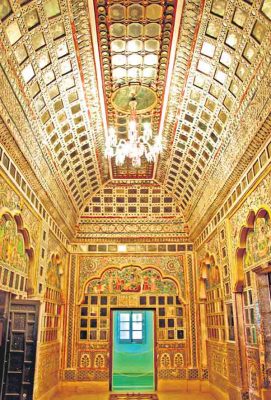 These Sheesh Mahals are seen at most of the famous palaces in Rajasthan. Some of the finest examples of this work can be seen on the ceilings, walls and columns of the palace at Samode, the Diwan-e-khas at Amber, the City Palace and Lake Palace at Udaipur, the Mehrangarh Fort in Jodhpur and the Junagarh Fort at Bikaner.

Traditionally, mirror work and ‘panni’ work – which is the use of coloured foil to fill in or outline the designs – were used together. The foil helps in giving each pattern a clear and well-defined outline, and highlights the visual impact of the overall design. Stained glass windows in primary colours set in geometrical designs, in conjunction with mirror and panni work has been used extensively in the interiors of fifteenth century forts, palaces and havelis of Rajasthan.

The use of myriad mirrors began with the decoration and embellishment of temples. Mirror-workers involved in this craft for six generations say that the purpose of multiple mirrors was to create endless images of the deities – showing that God was omnipresent. To the commoner, the Maharaja was also considered if not at the level of God, but certainly as an exalted being whose royal visage deserved to be enhanced!

Rajas and Maharajas found that walls covered in mirror work, multiplied the images of lamps – making the room brighter. Vanity also played a large part in this, as the personage of the Maharaja was also multiplied! Hence throne rooms, halls of private and public audience and other special areas, were heavily decorated with mirror work, interspersed with moulded gilding and panni work. Needless to say, the royal harems were also mirror bedecked so that the monarch would be able to see multiple images of his favourite queen. It is said that the use of large mirrors on garments by the nomadic Rabari tribe of Rajasthan also had its origin in the fact that the male wished to be reflected in the garments of his beloved!

The craftsmen involved in mirror work are usually descendants of families who have been in this trade for generations. In addition to skill, a great deal of patience and perseverance is required, since a craftsman can only complete a tiny portion of the work in a day.

The mirrors used in this type of work may be plain or coloured, and traditionally these were made in Faizabad and Ahmedabad. Usually available in circular shapes of 30 cm diameter, and 2-4 mm thickness – a thicker gauge makes cutting difficult, while a thinner gauge makes them easily breakable.

The mirrors are placed on a base of lime plaster, watered for several days, and made rough to prevent cracks. A special paste formed by mixing kali (baked lime) and surkhi (crushed burnt brick) with water is applied before the relief work. The design is carved with a 20-23 cm long kalam which has a pointed upper tip for carving, and a flat lower tip for scraping off undesired paste. The mirrors are cut into the desired shape, and their edges softened. A 10 cm long chimti then comes into play, and the mirrors are painstakingly placed piece by piece to form the design.

Panni work is done with thin foil, available in many colours. The technique involves outlining the floral designs on a glass surface, cutting it out with scissors, and then rubbing it with a hard stone (known as hakkik ka pathar) to create a concave surface. It is then placed on the outlined design, and attached with a special paste made out of a combination of baked clay, gum and water. The glass is framed in lime plaster with a slight gap between it and the wall.

Today, there are only about a handful of craftsmen in Rajasthan who have the knowledge of this technique. Their livelihood depends on the urban use of their craft. As in the case of all Indian crafts, the art of mirror-work is handed down from father to son, and training imparted on site. It is hoped that in time to come, patrons for this exquisite craft will come forward, to offer opportunities to recreate the magical world of mirrors.