With India moving towards being the highest Covid-affected country, the escalating tension at the Indo-Chinese border and the negative economic growth, portend a disastrous future. India is now paying the price for the harshest lockdown, imposed when the viral infection level was under thousand.

The Modi government has cleverly used the Covid-19 crisis and the Chinese threat at the border as a cover to divert the attention from its mishandling of major issues like the Citizenship Amendment Act (CAA), 2019; Jammu & Kashmir, and the nosediving economy. The government is unlocking the economy in phases at a time when the spike in Covid-19 cases is setting new records every day.

The Modi-led BJP government is taking advantage of all the burning issues to further its Hindutva-based political agenda, be it Covid crisis, Delhi riots, Indo-China standoff or death of actor Sushant Singh Rajput. The media circus and political polarisation around the death of Rajput have drawn the attention of the conscientious people of the country.

The BJP has already launched a campaign around ‘justice’ for Sushant in Bihar, playing on the sentiment that his death isn’t just a case of suicide but a consequence of abetment. His girlfriend, Rhea Chakraborty, is being shown as an arch-villain. On the other hand, West Bengal’s ruling party, TMC, is playing the Bengali sentiment card by supporting Rhea — the daughter of West Bengal.

The promise of making India a trillion-dollar economy seems will remain only a promise now, with negative growth rate being the new prediction. One after another error in governance – from demonetisation, unplanned and untimely lockdown to alienating Reserve Bank of India’s successive governors have all contributed to the present crises.

Umar Khalid, the human right activist and a former student leader of Jawaharlal Nehru University, was arrested under the Unlawful Activities (Prevention) Act (UAPA) on September 13 for his alleged conspiracy to trigger the February Delhi riots. Khalid was under police protection since 2018.

How did Khalid, who was guarded by a policeman all the time and was presumably under electronic surveillance, manage to design and hatch a conspiracy of violence in Delhi is an unresolved question. The Delhi police have also named Communist Party of India (Marxist) general secretary Sitaram Yechury, renowned economist Jayati Ghosh, Delhi University professor and public intellectual Apoorvanand, Swaraj Abhiyan leader Yogendra Yadav and documentary filmmaker Rahul Roy, among others, as persons who had, encouraged the protesters as part of a ‘plan’.

The Delhi police did so on the basis of confessional statements of three arrested women students — Devangana Kalita and Natasha Narwal of Jawaharlal Nehru University, and Gulfisha Fathima of Jamia Milia Islamia. Lawyers, however, say the fact that the confessional statements of both Kalita and Narwal are entirely identical, including even the typos and grammatical errors, suggest that these statements are drafted by the police themselves. 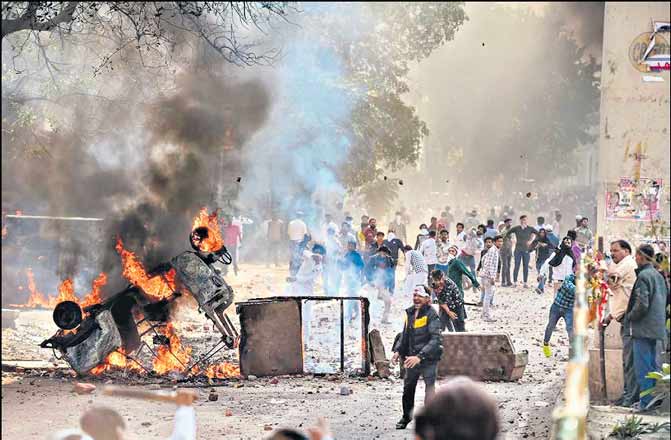 Ribeiro wrote: “The Delhi Police has taken action against peaceful protesters but deliberately failed to register cognizable offences against those who made hate speeches, which triggered the riots in Northeast Delhi. It troubles sane and apolitical persons, like me, why Kapil Mishra, Anurag Thakur and Parvesh Verma have not been arraigned before the courts of law while deeply hurt Muslim women, peacefully protesting against discriminations based on religion, were lodged for months together in jail.”

While the government has submitted hundreds of pages to the court against anti-CAA activist Umar Khalid and others, it has failed to keep any record pertaining to the death and injury to the migrant labours while they were returning home after the imposition of the countrywide lockdown.

On September 14, the first day of the monsoon session of Parliament, in response to questions posed by Lok Sabha MPs, the Centre said it had no data on migrant workers who died as a result of the imposition of the lockdown. Union Minister of State for Labour and Employment Santosh Gangwar’s response to questions concerning migrant workers’ deaths and loss of livelihoods in Parliament exposed the utter callousness of the Ministry of Labour and Employment about the lives of the very workers it is mandated to protect. The Centre has washed off its hands of its core responsibility to address the issue by declaring that it has no data.

On the other hand, the BJP government at the Centre thinks that whatever help it offered to the people during the pandemic is largesse doled out and, therefore, they expect the people to be grateful to the government. The utter insensitivity displayed by the Modi government in dealing with the Covid crisis is a sign of arrogance of power.

Seeking enemies within the nation is crucial for the success of the Hindutva agenda of the ruling BJP. For, it generates constant tension and thrill that maintain the centrality of Hindutva in the public sphere. It ultimately gives huge dividends in terms of electoral mandates. Instead of responding to the opposition with responsibility, which is a sign of a healthy democracy, the present BJP government wants to portray the entire opposition as an enemy of the nation, as if the nation belongs to the BJP and the BJP is the nation.

Hope good sense prevails upon the ruling BJP and it gives due weightage to the opposition for enabling checks and balances necessary for making a vibrant democracy.