A renowned magician and rationalist, T Ramesh joined the Jana Vignana Vedika (JVV) in 1990. Some 28 years later, his consistent activism and work with the organisation has resulted in his name becoming synonymous with JVV. So much so, that he is known as JVV Ramesh. Having grown up in a rural area near Suryapet, Ramesh was inherently drawn to education.

“My father used to work as a teacher in Tungaturthi. I used to stay with my grandmother near Suryapet. We lived in an area where most people were from low income families, where many children never went to school. I used to tutor them for free in the evenings. I was a child myself at that time,” says Ramesh, who later worked as the Nalgonda district co-ordinator in the Chaduvu Velugu adult literacy programme for a decade.

During this time, he had his first brush with rationalism. “As a high school student, I used to go for tuitions a few kilometres away. One night while cycling back home, I saw something that appeared to be a ghost on a tree. I got scared and ran away. The next morning, when I passed by the same spot, I realised the ‘ghost’ was just a kite stuck in a tree. In the darkness, the pattern on the kite appeared like eyes,” shares Ramesh. The incident banished any fear he had of supernatural elements.

After joining intermediate in the 1980s, his foray into activism began as he witnessed issues faced by people, especially students. Magic also piqued his curiosity. “I used to see garadi (folk magic) performers and would ask them to teach me magic tricks. Equipped with basics, I enrolled in a course in Magic in Telugu University when I moved to Hyderabad to pursue my graduation,” recalls Ramesh, who paid for his education by performing magic as a teenager.

In 1990, he joined JVV after graduation and spent years conducting workshops and capacity development in rural areas. “While working in JVV, I went to Mahaboobnagar as a magician as part of a literacy event. There I started debunking the miracles done by godmen. I am famous as a godmen-debunker, but, in reality, most of my work has been in the field of education,” explains the current vice-president of All-India People’s Science Network, adding, “I wanted to show how superstitions affected people, and godmen fooled poor farmers. There were many instances where people were lynched and burnt to death on suspicion of practising witchcraft.”

Ramesh hopes to make education enjoyable for children. “Children are inherently rational and inquisitive. Adults should be more patient and spare some time in answering their questions, so they automatically develop scientific temper,” he adds. 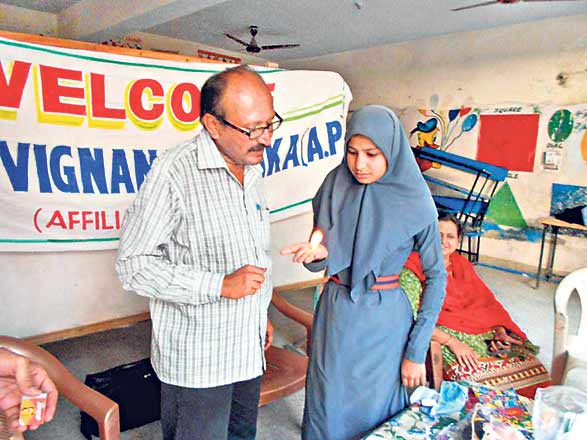 The curriculum that the education system follows, according to him, doesn’t allow rational thinking. “Once a godman fooled people saying he had trapped a ghost in a balloon which was inflating by itself. I asked a high school teacher present there how it was possible. He said he didn’t know how the balloon was being filled. It was a simple trick which I demonstrated using basic science. Our current curriculum only focuses on percentiles and not imparting knowledge,” he says, adding, “During workshops, we make the villagers conduct scientific experiments and debunk superstitions.”

Understandably, his journey has been a bumpy one. From forbidding families from attending the workshops to spreading rumours of haunted workshop venues, he experienced it all. “I received many threats from godmen and their followers. I even received threats when I filed a petition against the fish medicine, but I don’t let it bother me. My petition only seeks to know the efficacy, statistics and hard data regarding fish medicine instead of claims,” he explains.

Quiz him on what he wants to achieve by taking away beliefs, he says, “I never say people shouldn’t have a belief system. I promote a scientific outlook. People come and tell me that my talks contradict their beliefs. I tell them to continue with their beliefs, but not let their children fall prey to superstitions.”

With almost three decades of work behind him, his road ahead is also the same. “I want to create more resources, in addition to the thousands of existing members of the JVV, who will then take this ahead. Apart from this, I want to utilise technology to spread scientific knowledge and make science fun for children,” he shares.