The later decades of the 15th century. An aspiring artist arrives in Florence with the hope of being apprenticed to Andrea del Verrocchio, a well-known painter, goldsmith and sculptor. By way of a CV, the man, whose origins were rather awkward for the times, being an illegitimate son from a Tuscan village, provided an inventory of his work until then, an inventory worth citing in full:

Many flowers copied from nature; a head, full face, with curly hair; certain St Jeromes; measurements of a figure; designs of furnaces; a head of the Duke; many designs of knots; 4 drawings for the picture of the Holy Angel; a little narrative of Girolamo da Fegline; a head of Christ done in pen; 8 St. Sebastians; many compositions of angels; a chalcedony [a semiprecious stone carved in relief]; a head in profile with beautiful hair style; certain forms in perspective; certain gadgets for ships; certain gadgets for water; a head portrayed from Atalante, who raises his face; the head of Girolamo da Fegline; the head of Gian Francesco Boso; many necks of old women; many heads of old men; many complete nudes; many arms, legs, feet and postures; a Madonna finished; another, almost finished, which is in profile; the head of Our Lady who ascends to heaven; a head of an old man with an enormous chin; a head of a gipsy; a head wearing a hat; a narrative of the passion made in relief; a head of a young girl with plaited tresses; a head with a head-dress

The diversity of his interests and expertise here is amazing: religious symbols, portraiture, engineering and technological apparatuses, human anatomy (especially musculature and bone structure), fashion (especially hairstyles), Nature and Nature’s creations, in a man who, at this point in time, was just about 30 years old. That he would go on to excel in each of these fields is evidence that the man was a polymath and a genius.

His surviving 6,000 pages of writing and drawings have professional hydraulic engineers, anatomists and painters marvelling at the quality of his thought and his designs even today. His image of the human form drawn in proportional relationship with the geometry of a circle and square remains one of the most famous drawings in human history. His ‘religious paintings’ enthral, while his portrait of the woman with the most enigmatic smile ever may well be the most reproduced paintings in history. When Leonardo da Vinci died 500 years ago, on 2nd May 1519, he was the ‘Renaissance Man’, the name by which he is known today, although, more accurately perhaps, the Renaissance should be known as the da Vinci Age.

Despite all his fascination and expertise in anatomy and various sciences, da Vinci treated painting as the ultimate science. If the Mona Lisa (1503-07) and The Last Supper (1498) show da Vinci’s extraordinary control over perspective, physiognomies and colour, his depiction of the foetus in the womb, the cross sections of the human body and the draft plans for a flying machine, and of course Vitruvian Man (which adorns the cover of his Notebooks from several publishers) were works that brought together art and science with a degree of artistic beauty and scientific accuracy that is unmatched. Much has been said about his art, arguably his biggest USP even today. But perhaps there is more to da Vinci than meets the eye, if one were to play on his obsessive interest in optics, perspective and visualisation. 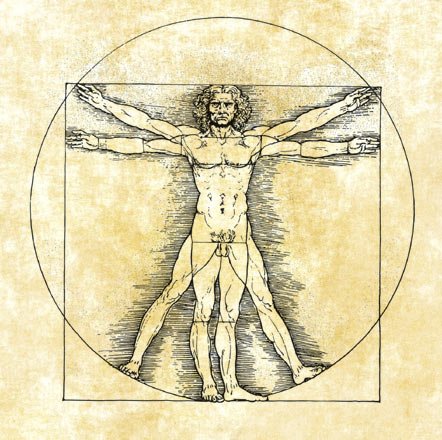 The merger – in terms of representational technique, method, and interest – of art and science is what makes da Vinci almost unique among artists. Today, the work of critics like Barbara Stafford, Lorraine Daston, James Elkins, Peter Galison and Katharine Park have shown how crucial drawing and the arts are to the way we ‘see’ scientific discoveries or objects. Da Vinci was one of the first to unsettle the ‘binary economy’ (as Caroline Jones and  Peter Galison term it in their fine volume, Picturing Science, Producing Art) of art and science by making anatomy and engineering the subject of artwork, never sacrificing the accuracy of scientific drawing for the imaginative reconstruction of the artist but rather bringing the object of scientific study into the domain of artistic beauty.

When he writes ‘the distance between the chin and the nose and that between the eyebrows and the beginning of the hair is equal to the height of the ear and is a third of the face’, da Vinci has merged biological description with geometry. He would then embody all this in his Vitruvian Man, of course. Examining his medical works, commentators have argued that he may have been the first to actually describe conditions like arteriosclerosis and its effects on the blood vessels. He did all this after careful observation, as he says:

I have dissected more than ten human bodies, destroying all the various members and removing the minutest particles of the flesh which surrounded these veins, without causing any effusion of blood other than the imperceptible bleeding of the capillary veins

One look at drawings such as the Study of the Superficial Anatomy of the Foot and Lower Leg (1510), Studies of a Dissected Shoulder, Bones of the Foot and Lower Leg, and Thoracic Musculature (c. 1510) or Four Sequential Studies of the Superficial Anatomy of the Arm, Shoulder and Breast (1510-1511) would convince us of the ‘merger’ between art and science in da Vinci. Imagining the future of flight and its apparatuses, da Vinci would draw Design for the Wing of a Flying Machine. In 2000, skydiver Adrian Nichols actually built a parachute on the basis of da Vinci’s drawing – and it descended smoothly, as da Vinci prophesied and calculated.

If we think carefully, the medical sciences, physics and chemical sciences rely on visual representations of structures and processes, from graphs to photographs. When informing us about spectacular discoveries and achievements of, say space science, one notes the image in the newspaper with a tiny caption ‘as visualised by the artist’. Da Vinci did do precisely this: take the science and repackage it as art for us to imagine via an image.

There are of course interesting studies of da Vinci’s representations. Debates have raged about the dental work of La Giaconda, or the Mona Lisa, that caused her to smile thus for da Vinci. Hutan Ashrafian, Clinical Lecturer in Surgery, Imperial College, London, whose paleopathological work stretches from ancient Greece to ancient Egypt and Leonardo da Vinci, and who specialises in medical analyses of historical figures or paintings (he has argued that Tutkenhamen had epilepsy of the temporal lobe and that the model for Michelangelo’s John the Baptist in Madonna and Child with St John and the Angels had thalassemia) with published work in The Lancet and other respected journals has argued that Vitruvian Man actually shows an inguinal hernia.  Clearly, da Vinci has not been fully decoded yet, whatever Dan Brown might say.

One can perceive, literally, this merging of the two fields in Irma Richter and Thereza Well’s thoughtful organisation of the Oxford World Classics’ 2008 reissue of da Vinci’s Notebooks. It opens with ‘True Science’, with da Vinci’s essays on science. Then follows ‘The Universe’, including essays on the four elements and the ‘four powers of nature’ (weight, force, movement, percussion), theories of mechanics, flight, and the arts (with essays on proportion, anatomy, perspective, etc). While da Vinci wrote a treatise, ‘The Nature of Water’, he also wrote an imaginative account of the Biblical Deluge, thus showing that imaginative reworkings of myths, stories and scriptures do offer fodder for science and vice versa.

Observing waves and the movement of water, da Vinci wrote: ‘The spiral or rotary movement of every liquid is swifter in proportion as it is nearer to the centre of its revolution’ and then drew images of these movements – images that are astonishingly close to his drawings of hairstyles and fashion accessories (coiled hair is a common theme in da Vinci). In similar fashion, da Vinci would write of the idea of ‘force’:

Force is the same throughout and through all the body where it is generated.

Force is only a desire of flight.
Always it desires to weaken and to spend itself.
Itself constrained it constrains everybody.
Without it nothing moves.
No sound or voice is heard without it.
Its true seed lies in living bodies.

But da Vinci also defined force as: ‘Force is a spiritual energy, an invisible power which is imparted by violence from without to all bodies that are without their natural balance’.  This balance between art and science, religious ideas and methodological curiosity constitutes the greatness of da Vinci.

So much for da Vinci’s science-stories-religion combo. If we turn to his writings on art, we get passages such as this:

Painting is based upon perspective which is nothing else than a thorough knowledge of the function of the eye. And this function simply consists in receiving in a pyramid the forms and colours of all objects placed before it … The science of painting deals with all the colours of the surfaces of bodies and with the shapes of the bodies thus enclosed; with their relative nearness and distance; with the degrees of diminution required as distances gradually increase; and this science is the mother of perspective, that is the science of visual rays.

Da Vinci, as we can see, approaches art as a science, and demands that science be made available, studied and represented with artistic style and beauty.

The Roman architect Vitruvius was one of the first to think in terms of the proportions of the human figure. In the 1511 edition of Vitruvius’ book, da Vinci’s drawing made its appearance as the Vitruvian Man. Da Vinci sought to make this anatomical image a geometric one:

The head af is 1⁄6 larger than nf. Then he drew the feet 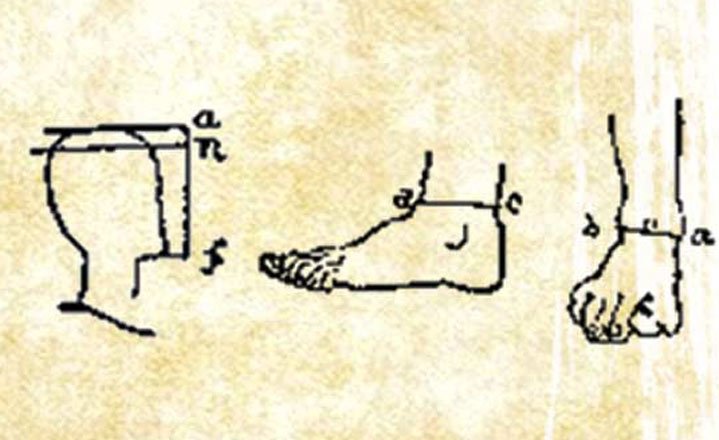 Often deeply unhappy that the available geometric and architectural schemes were inadequate to his task of accurate portraiture of the human form, da Vinci would evolve his own:

Show the bones separated and somewhat out of position so that it may be possible to distinguish better the shape of each bone by itself. And afterwards join them together in such a way that they do not diverge from the first demonstration except in the part which is concealed by their contact.

The Oxford historian Martin Kemp, one of the world’s top da Vinci scholars, founder of the Universal Leonardo project (http://www.universalleonardo.org), and da Vinci biographer would write about the  above technique in his stunning Leonardo da Vinci: The Marvellous Works of Nature and Man (2006): ‘This brilliantly innovatory technique has become one of the standbys of modern technical illustration’. Kemp also notes da Vinci’s plans for a treatise, On the Human Body, ‘was to be not so much an anatomical book as a far-reaching exposition of man’s role in the natural order of things’. Kemp quotes da Vinci here:

I will show in four expositions the four universal states of man; that is: mirth, with the various acts of laughing and describe the cause of laughter; weeping in various manners with its causes; contention with various acts of killing, flight, fear, ferocity, boldness, murder and all the things pertaining to similar instances; then show work, with pulling, pushing, carrying, stopping, supporting and similar things. Then describe attitudes and movement; then perspective through the function of the eye, and hearing – I will speak of music – and describe the other senses.

Da Vinci’s curiosity was matched, as is evident, only by his talent and, more importantly, his desire to learn through training – a laborious process then as now, and one from which even academics shy away today! – and sustained effort.

The European Renaissance needed somebody who could embody the thirst for knowledge and a phenomenal ability to fulfil that knowledge, across disciplines and fields of inquiry. Anticipating today’s methodological insistence, in some quarters, on interdisciplinary work, Leonardo da Vinci represents exactly that. Across the world, he remains iconic for this reason alone.