Prime Minister Narendra Modi is slated to join other heads of state who are now in the final stages of negotiating the Regional Comprehensive Economic Partnership (RCEP) in Bangkok on November 4, where the conclusion of the long-drawn negotiations is expected to be announced. The RCEP is expected to be concluded by June 2020 and take effect after the other members go through the parliamentary ratification process, a check not practised in India.

While the government is yet to announce if India would sign up for the partnership next month, voices of protests and resistance are growing louder in the country. In fact, the Congress — which started the RCEP negotiations in 2012 — has threatened that it will not allow the government to go ahead, with party leader Jairam Ramesh stating that it will be the third assault on the economy after demonetisation and GST. So what is RCEP, what are its benefits and what are the threats from it?

Though the RCEP was ideated at the 21st ASEAN Summit in Cambodia way back in 2012, despite 28 rounds of negotiations, the agreement details have not been finalised due to persistent differences even though some chapters have been concluded.  Experts say a delayed launch of RCEP will mean giving up real GDP gains that compound over time. Studies put this number at $19.6 billion for RCEP countries and $17.7 billion for the world, if launched a year later than 2020. (Renuka Mahadevan, University of Queensland, and Anda Nugroho, Ministry of Finance, Indonesia –  East Asian Forum)

The major chapters in the agreement include trade in goods and services, rules of origin, investment, intellectual property, economic and technical cooperation, electronic commerce, competition and disciplines on small and medium enterprises, which have not been included in the World Trade Organization (WTO), largely because developing countries have argued that the proposals for the inclusion of these areas are detrimental to their interests. (Bishwajit Dhar, 2019. Madhyam Briefing Paper).

(3) facilitation of trade and investment;

(7) technical assistance and capacity building to the developing and least-developed countries; and

If all negotiating countries sign up, RCEP would create the largest free trade area covering 45% of the world’s population, 30% of the global GDP worth $21.4 trillion and one-third of the global trade in goods and services. (Archita Anand, Centre for Public Policy Research). RCEP, the most ambitious trade agreement being negotiated by the developing countries, will encompass first-ever agreements of India with China, Australia and New Zealand.

The global economy faces headwinds from trade wars, mercantilist policies, failed multilateral trading system, geo-political risks and so on, and RCEP can help India negotiate these headwinds. In fact, experts say India will be the only country in South Asia to potentially gain but this will depend on the depth of the final RCEP agreement.

An earlier study done by an industry body says RCEP can help regionalise sophisticated global supply chains that make Asia the world’s factory. If trade barriers fall, market size will expand beyond national borders, and regional market will facilitate the realisation of economies of scale in production. Second, if new regional rules align with WTO agreements on goods and services, it will help against protectionist measures, especially the non-tariff barriers. Third, it promotes easier FDI and technology transfers by MNCs. This will further boost regional supply chain trade. Fourth, by simplifying trade rules, it will reduce overlap among Asian FTAs. Rules of origin can be simplified and administered through the electronic medium. This will reduce transaction costs for businesses, the MSMEs particularly. Falling trade barriers will allow cheaper import of food and consumer goods, benefitting consumers and low income households.

Conventional GTAP (Global Trade Analysis Project) modelling suggests that joining RCEP will generate a gain of 0.06% of GDP. (eastasiaforum.org). India will lose out marginally, if it opts out of the deal. However, to realise the gains, several risks have to be addressed. These include managing different relational dynamics among members; historical conflicts and territorial disputes; significant development gaps among members which may prevent countries from liberalising trade policies; lack of commonality in domestic policies; lack of domestic support; and concurrent regional integration agendas like Trans Pacific Partnership (TPP) that could put pressure on a country’s scarce resources, writes SB Das (ISEAS perspective).

Even though the Indian government has been constantly interacting with stakeholders, which became more intense in the recent past, there is much disinformation brought on by the secrecy of the negotiation texts. Moreover, the divergence between WTO and regional trade rules may worsen, experts say.

No wonder, organisations like Swadeshi Jagran Manch, opposition parties and experts like Bishawajit Dhar, NR Bhanumurthy and Nilanjan Ghosh advise caution while moving ahead. Direct stakeholders like farmers, trade unions, civil society groups and industry associations — from dairy, automobiles, textiles to steel — have not just  cautioned the government on the dangers of RCEP, but have also started protesting.

India would have to use the time between the close of the agreement and the date of entry into force wisely to do an in-depth study of which sectors are likely to be impacted and create the correct infrastructure and environment to reduce negative impact from competition and other trade losses.

But Ram Upendra Das, Head, Centre for Regional Trade, a newly-established institute of the Ministry of Commerce and Industry, cautions that leaving RCEP would make India’s export prices uncompetitive vis-à-vis other RCEP members’ exports, adding that “the ensuing export-losses contributing to foreign exchange shortages and the subsequent extent of depreciation of the rupee can only be left to imagination”.

Economists Nitin Desai and Arvind Panagariya state that India’s future lies in export-led backward manufacturing. However, India exports about 10% of GDP. This, according to World Bank, must rise to 30%. So RCEP may be a natural choice for trade-led growth for India in spite of all challenges.

Realising the multiple issues that need to be handled to benefit from the RCEP, Foreign Minister S Jaishankar has focussed on attention on overcoming domestic challenges, particularly related to infrastructure, input markets and policies.

India needs to deploy diplomacy to tackle issues like seeking 10% advantage over China in tariff removal. For instance, at present, road transport in India costs $7 per km, while the cost is only $2.50 per km in China. Similarly, economical and timely access to land, labour, capital and technology remains a challenge in our country. Correcting the situation will require domestic input market reforms and heavy investment in infrastructure to enable Indian companies participate effectively in global value chains.

Post RCEP, reforms for significant business support services would be needed for SMEs to improve their international competitiveness and lower their costs of using the RCEP. This requires structural reforms, investing in cross-border infrastructure and streamlining trade facilitation, writes Wignaraja G (Asia-Pacific Research and Training Network on Trade) 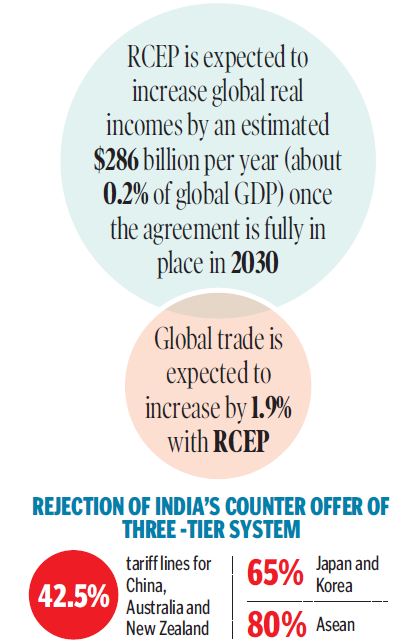 RCEP Vs Other FTAs

RCEP differs from other FTAs because the FTAs concentrate solely on market access issues but RCEP also addresses development dimensions. Economic development and economic and technical cooperation, to address the development divide between members, are a key building block of RCEP

The Comprehensive and Progressive Agreement for Trans-Pacific Partnership began life as the US-backed TPP (Trans-Pacific Partnership), but it was reincarnated as the CPTPP after President Donald Trump pulled the plug on American participation in 2017. In its latest guise, the CPTPP includes Brunei, Malaysia, Singapore and Vietnam plus Australia, Canada, Japan, Mexico, New Zealand and Peru.

The US in the past has been party to many multilateral trade agreements, but in the last decade, it proposed a major trading bloc (Trans Pacific Partnership) covering many of the states in the pacific region. This trading bloc, however, ignored two major economies, i.e. China and India. To counter this, China endorsed RCEP, which plans to cover all the major Asian economies.

CPTPP aims for stricter common standards on labour issues, environmental protection and dispute resolution. RCEP, on the other hand, focuses on standardising tariffs across the region, as well as improving market access for services and investment. However, it includes special provisions for developing economies, such as gradual tariff liberalisation and transition times.