Hyderabad: Medium-pacer Avesh Khan (7 for 24) ripped through the Hyderabad batting to put Madhya Pradesh on top on the first day of the four-day Group ‘B’ Elite Ranji Trophy league match at Holkar Stadium in Indore on Thursday.

Hyderabad, who scored a ten-wicket win over Himachal Pradesh in their previous encounter, were in for shock as a fiery Khan spelt doom. Bowling with good pace and pitching the ball up, Khan had Hyderabad batsmen ducking for cover. Left-handed opener Tanmay Agarwal was the first to go in the second over as he was bowled by Khan. Tanay Thyagarajan, who was promoted, lasted 19 deliveries before he became Khan’s second victim. 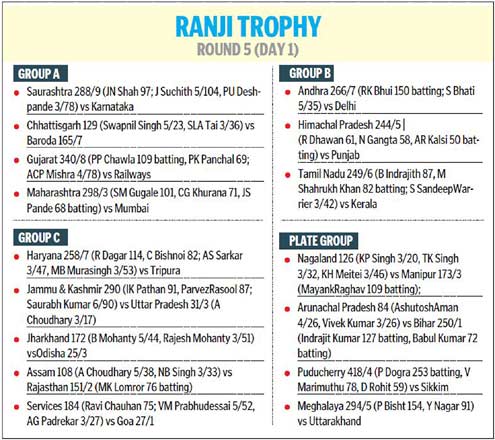 Skipper Akshath Reddy batted gamely but K Rohit Rayudu continued his poor form with willow. The left-hander edged Khan to wicketkeeper Naman Ojha for four. But Hyderabad had further setback when their consistent batsman left-hander B Sandeep snicked Khan and it became 29 for 5 in 15 overs when skipper Reddy too returned to pavilion as he fell to Gourav Khan for 21. 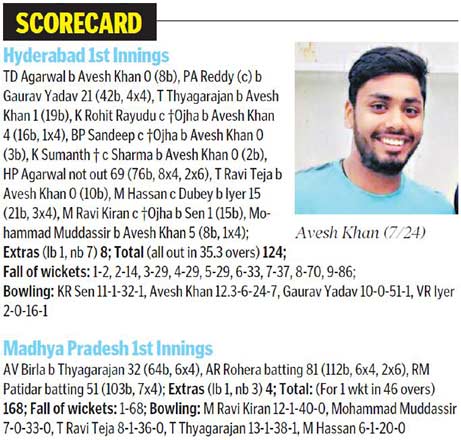 Hyderabad slipped further as Kolla Sumanth and T Ravi Teja were back without opening their accounts. At lunch, Hyderabad were tottering at 83 for 8 in 29 overs. It was left to Himalay to take the fight into the enemy’s camp. The middle order batsman stood tall and went on to complete his well-deserved half-century off 71 balls. He shared 33 runs with Hasan. However, Venkatesh Iyer broke the eighth wicket partnership by sending back Hasan. In the end, Himalay was stranded as Ravi Kiran and Mudassar went cheaply.

MP openers Aryanman Virkan Birla and Ajay Rohere (81 batting) put on 68 for the opening wicket. Left-arm spinner Thyagarajan gave the first wicket for Hyderabad by castling Birla’s stumps. Hyderabad could not get further breakthrough as Rohera and Rajat Patidar (51 batting) batted sensibly to put the home in command.