Hyderabad: The shocking dacoities that the dreaded Pardhi Gang pulled off after stopping trains by tampering with signals in Sholapur of Maharashtra were with the help of railway trackmen.

The gang, which was arrested recently, had kept an eye on the timings of trains using a mobile app giving out train timings, tampered with the signals to stop the trains, and then used ladders to climb into the trains and loot gold and other valuables from sleeping passengers.

For this, the gang had taken training on tampering with the signals from a few railway trackmen, according to the confession made by eight Pardhi gang members who were caught recently by the Government Railway Police (GRP). Investigators said the kingpin, Dada Shinde of Maharashtra, who is absconding, came in contact with a few trackmen and honed his skills in tampering with railway signals.

After teaching the same technique to his associates, Shinde and his gang started targeting trains. The habit of many passengers leaving the windows open during summer made the work easier for them.

Targeting the signal box located a few metres away from the station, the gang members would cut the signal cable by breaking open the lock half an hour before the train reached a particular station in the early hours and ensure that the train is stopped. 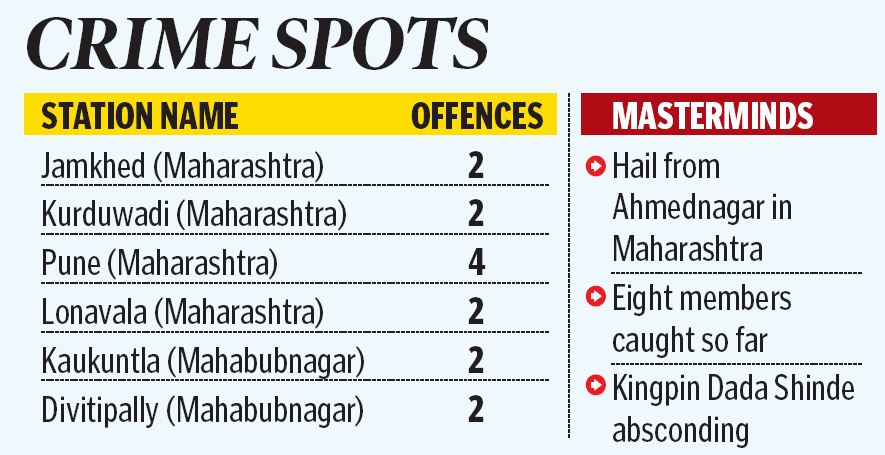 Using a ladder, one of the gang members would climb windows of the sleeper coach, where a majority of passengers sleep with the windows open and snatch jewellery and cash. If they did not find any cash or other valuables in a coach, they would move to another with the help of a ladder.

On September 9 last year, the gang tampered with the signals at Kaukuntla railway station in Mahbubnagar district and committed dacoities on the Yesvantpur and Jabalpur Express trains. The gang damaged signals at Divitipally railway station in Mahabubnagar and committed dacoity, again in the Yesvantpur Express. Stones were also hurled at passengers in the two incidents, in which the gang stole 37.5 tolas of gold ornaments.

GRP Deputy Superintendent of Police (Rural) M Srinivas said they had succeeded in nabbing the gang members one year after the incident with the help of vital clues from the crime spot. A hunt is on to nab Shinde.