With close to 1,000 performances in India and abroad to her credit, Anupama Kylash is a name many are familiar with in the cultural circles. And she is a lady who certainly knows her subject, down to the tiniest detail, with a Bachelor’s and a Master’s degree in dance and a doctorate from the University of Hyderabad. Having completed her studies, Anupama was very keen to learn under a female guru and, luckily, she got the best in the field.

“Like many others, I also learnt Bharatanatyam at first, but, later on, seeing my seniors perform Kuchipudi, I got inclined towards it and found my first Kuchipudi guru in Uma Rama Rao. She is the first female disciple of Vedantam Lakshmi Narayana Sastry. Due to this, we followed the old and traditional style of Kuchipudi, which is intact in my performances and teachings till date,” explains Anupama. Her guru’s interest in literature was carried forward by Anupama who is also trained in ‘Vilasini Natyam’ from Swapna Sundari, a Padma Bhushan recipient.

In any creative field, diverting from the main discipline is not appreciated much. After training under Uma Rama Rao, Anupama wanted to explore more aspects related to her art. “When I joined Swapnakka (Swapna Sundari), she was not happy with me learning other traditions, and, that too, a Devadasi tradition. But, I explained that all said and done Kuchipudi is a male dance tradition. And, I was keen on learning about female dance traditions which managed to convince her,” says Anupama with a smile. 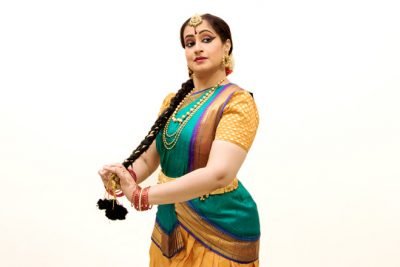 She is trained in all three aspects of Vilasini Natyam – the temple tradition (aalaya sampradaya), court tradition (kutcheri aata) and theatrical presentation (aata bhagavatham). Elaborating on her years with Swapna, she says, “Swapnakka was a wonderful performer and dynamic lady. There is a perception that performers hide their knowledge and don’t let on the full extent of it. She never did that. She taught me everything there is to know about Vilasini Natyam,” adds Anupama who has authored two books till date.

The dancer was criticised initially for her unconventional costumes in Kuchipudi. “My costumes are always a bit experimental. If you want to reproduce the authentic costume of any dance form, then, do it fully. There was never any set costume for solo performances as it was never a solo tradition. They adapted the costumes, according to the necessities of the dancers of the period,” explains Anupama. Most solo performers who came from Chennai in the ’50s and the ’60s were Bharatanatyam dancers, with 90 per cent being film actors. They chose to wear temple jewellery found only in Nagercoil in Tamil Nadu.

“To have a fixed idea of a costume for a format which is not there in a dance form at all does not make sense, along with the solo tradition the costumes for the solo performance have also evolved over a period of time as per requirement. I decided a long time ago that I will not follow any of this and wear what I want to wear and my technique will not be mixed with something else,” says Anupama. Most of her costumes are designed by her daughter Churnika Kylash.

Vilasini Natyam is being performed by many these days, but what sets Anupama apart is that she is an academic and a performer and someone who had evolved over several years.

“In all my performances, I am addressing an issue; I have to be talking about the form or the technique of the form. Every time I do a performance, I do it so as to get and give some knowledge about that particular subject. I am not satisfied if I just dance and come away. I want to add an academic scholarship component to my work. All my productions have been like that; there is always a research element which is my main strength,” says Anupama, who is serving as a faculty member in the Master’s programme at the University of Silicon Andhra, Milpitas, California, USA.

In 2000, Anupama started her dance institution named ‘Anubhav’ where she only teaches one-on-one, instead of the usual group classes.

“I feel even if there are 10 students, all of them should be distantly different from each other.  I have always believed our dance forms are meant for individual development. They have never been a group factory production. Cloned performances are a western concept,” concludes Anupama, who is putting her heart and soul into popularising Vilasini Natyam and giving it a pride of place among traditional dance forms.