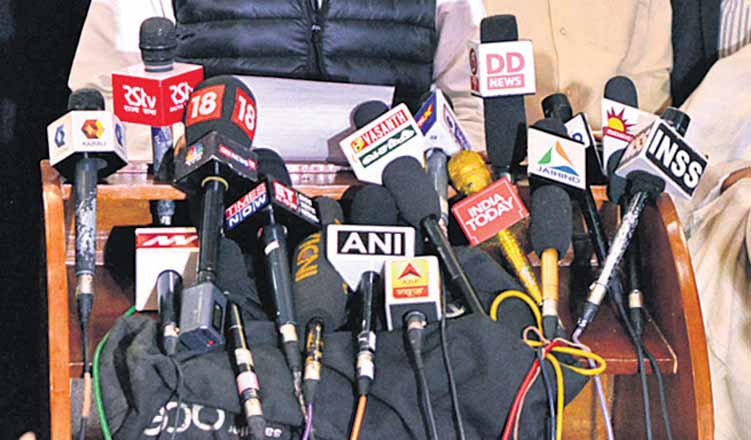 The present political upheavals in India have muddled propaganda and fake news with news. The advent of social media and digital platforms, coupled with aggressive electronic media, has added to the perplexed media environment in our country. Social media and other digital platforms provided us with a handle for sharing opinion and information, which are mostly unverified, spreading fake news in this era of information and technological advancement. It has nothing to do with journalism as we know that journalism reflects truthfulness, unbiased and verified information following a set of universally accepted ethics.

The print and electronic media and their digital outlets always follow ethical parameters and do not cross the Lakshman Rekha. However, in the present background of hatred and warmongering, mixed up with pent-up emotion of patriotism, a section of media, particularly the electronic media, has renounced all ethical bindings only to join the deafening cacophony of jingoism created by the establishment. One prominent pro-establishment Indian TV journalist has ironically redefined the media ethics by asserting that “being a nationalist is a prerequisite to being a journalist”. The virus of extreme patriotism and jingoism has equally affected the Pakistani media, particularly the satellite TV channels.

Amid escalation of tension on both sides of the border, the space for people-to-people dialogue is squeezed and the anti-war and peace activists are threatened. On the Indian side, TV anchors are playing a high-pitched drama advocating for war and teaching Pakistan a lesson even by wearing military attires, brandishing toy gun, showing unfurled national flag in the background etc. Some of them are crying for the blood of the so-called traitors or ‘desh drohis’ targeting the intellectuals, journalists and the activists who are criticising the establishment and the warmongers.

The campaign against perceived enemies of the nation has equated Pakistan with Indian Muslims and with those who oppose war and hatred against a select religious group. They have tried to build a nationalist hysteria by flooding the social media and some of the satellite channels with patriotic slogans, quotes, video clips of patriotic songs and story of bravery of our soldiers. Some of the films like Uri and Manikarnika glorifying the Army and the BJP government and a section of artistes also help in escalating the ultra-nationalists frenzy in India. We cannot say that the making of such films just before the general elections 2019 is not part of the greater game plan.

The BJP-led National Democratic Alliance under the leadership of Atal Bihari Vajpayee used the Kargil war very skillfully in the Lok Sabha elections of 1999. During the Kargil war, the media was used to evoke patriotism with visuals and music. The purpose was to build a mood of intense patriotism, which only worked to the advantage of the incumbent government. It is to be noted that the Kargil war was India’s first war, which was widely covered by a new entrant in India’s media domain — TV channels. The Kargil Review Committee said in its report that it was no surprise that some reporters were taken in by gossip, which was not always edited out. Now the intensity of indulging in creating ultra-patriotic hysteria has increased manifold.

The Press Council of India (PCI) was first set up in 1966 by Parliament under the Press Council Act, 1965, on the recommendations of the First Press Commission of India (1952-1959) to regulate the press in India. In the absence of electronic and other forms of media at that time, it was the PCI that regulated the print media and with limited powers.

After the electronic media and later the digital media became a dominant entity in the Indian media scenario, the successive governments at the Centre did not bother to regulate them by bringing them under the jurisdiction of the PCI or any other regulatory authority. The PCI itself recommended to the Central government many times to restructure the PCI to Media Council of India by bringing the electronic media under its jurisdiction. Regulating the print media by a statutory body and allowing other forms of media go unregulated violates the right to equality, a fundamental right guaranteed by the Constitution.

Pressure from powerful media barons and influential politicians who own TV channels may be the main reason for giving such unabated freedom to these channels. Although the News Broadcasters Association has established the News Broadcasting Standards Authority to regulate the electronic media, it is solely controlled by the broadcasters without any statutory control. The body so far has failed in bringing standard to this form of media or in disciplining it on ethical lines.

The main objective of the First Press Commission in recommending establishment of the PCI was to ‘safeguard the freedom of the press’, ‘ensure on the part of the press the maintenance of high standards of public taste and to foster due sense of both the rights and responsibilities of citizenship’ and ‘to encourage the growth of sense of responsibility and public service among all those engaged in the profession of journalism.’

It is maddening to see the entire gamut of journalism practised by most of the electronic media in the country today in the light of the recommendations and objectives of the First Press Commission.

In such a situation, dissemination of news and wholesome information among the people is facing many challenges. There are sets of universally accepted media ethics founded by the Centre for International Media Ethics — Ethical Journalism Network and International Federation of Journalists among others. However, the media, particularly the electronic media of the country, never bothers to abide by those internationally established ethics.

Indian journalism will lose its credibility if the media becomes a tool in the hands of the establishment, politicians with divisive agenda and violates one of the basic tenets of journalism — the ethics.