The wink that set the hearts of many a man aflutter still rings a bell in the minds for audiences. Priya Prakash Varrier, who rose to national fame with just a wink, is making her inroads into the Telugu film industry. She has now crooned a song in Telugu.

The music was composed by Sri Charan Pakala. What’s more, apart from sharing screen space with actor Nithiin in an upcoming movie, the Kerala girl has another project in store, a pan-India film titled Karma, which is being directed by debutant Kudipudi Vijay Kumar.

Priya plays the role of an emotionless girl who is affected by paranoid schizophrenia, a disease with debilitating symptoms of delusions and hallucinations. “She also has two variations in the character. She has two contrasting elements as a honey trapper and then as an expressionless girl. And at the end of it, how Karma drives home the point and justifies the story forms the crux. A typical psychological drama, Karma is based on real incidents. Not many filmmakers worked on such subjects,” says Vijay, who worked under Chandrasekhar Yeleti. 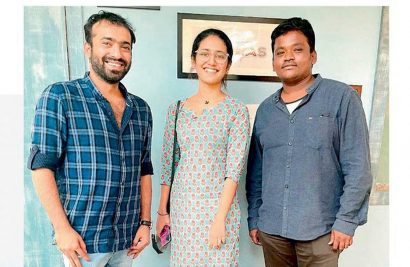 Vijay, who has an experience as a production executive, says Karma will be shot in picturesque locations of Scotland. “The girl character works at McDonald’s. The story tells how the girl gets cured and how she would find her love. The reason to chose a foreign country is that the story has a past that had happened in India. The foreign schedule will be wrapped up in 70 days. Bollywood actor Arbaaz Khan playing the baddie in the movie. Bobby Simha is being considered for the lead role. Telugu actor Ravi Varma and from Kannada actor Pavitra Lokesh are playing key roles. Karma is coming in Hindi, Telugu, Tamil, Malayalam, and Kannada languages,” says Vijay who developed the story for three years.