Hyderabad: The BR Ambedkar Vegetable Market Yard in Secunderabad, popularly known as Bowenpally vegetable market, shot into the national limelight on Sunday when Prime Minister Narendra Modi heaped praise on the market officials and traders for generating electricity and biofuel out of vegetable waste.

“At Bowenpally sabzi mandi, waste is now being turned into wealth. This is the journey of garbage turning into gold. Every day, about 10 tonnes of vegetable waste makes its way to the biogas plant that produces 500 units of electricity besides 30-kg of biofuel,” the Prime Minister said, in his monthly radio programme ‘Mann ki Baat.’

“We usually see vegetables rotting in sabzi mandis due to multiple reasons and this spreads unhygienic conditions around. However, the traders at Hyderabad’s Bowenpally Sabzi Mandi decided to produce electricity from vegetable waste. This is the power of innovation,” he observed. The electricity produced from waste is being used for street lights, office buildings and cold storage in the mandi while the bio-fuel was being used for cooking in the mandi canteen.

Market Secretary L Srinivas, speaking to Telangana Today, said they were able to save at least 50 per cent of the power bill after they started utilising power generated by the biogas plant that was established six months ago. “Our power bill used to be Rs 3.50 lakh per month but now we are paying only Rs 1.50 lakh after we started using electricity supplied from the biogas plant,” he explained.

Stating that efforts are on to bring the power bill to zero, he said the plant was established with the assistance of Indian Institute of Chemical Technology in about 10 guntas of land at the 23-acre market that came up in 2005. The Central government sanctioned Rs 2 crore while the State government allocated Rs 1 crore for setting up the plant.

“The vegetable waste has gone up from one tonne in the initial stages to 10 tonnes now, and consequently power generation is expected to go up by another 200 units. So far, in the past six months, 1,400 tonnes of vegetable waste has been used to generate electricity in the biogas plant,” Srinivas said.

Stating that about 40 varieties of vegetables arrive at the market regularly from four States — Maharashtra, Madhya Pradesh, Karnataka and Uttar Pradesh, he said: “We get over 17,000 quintals of vegetables daily in the market, which vendors from different places in the twin cities purchase and sell in their respective areas,” he said, adding that depending on the requirement, vegetables are also sent to Andhra Pradesh. 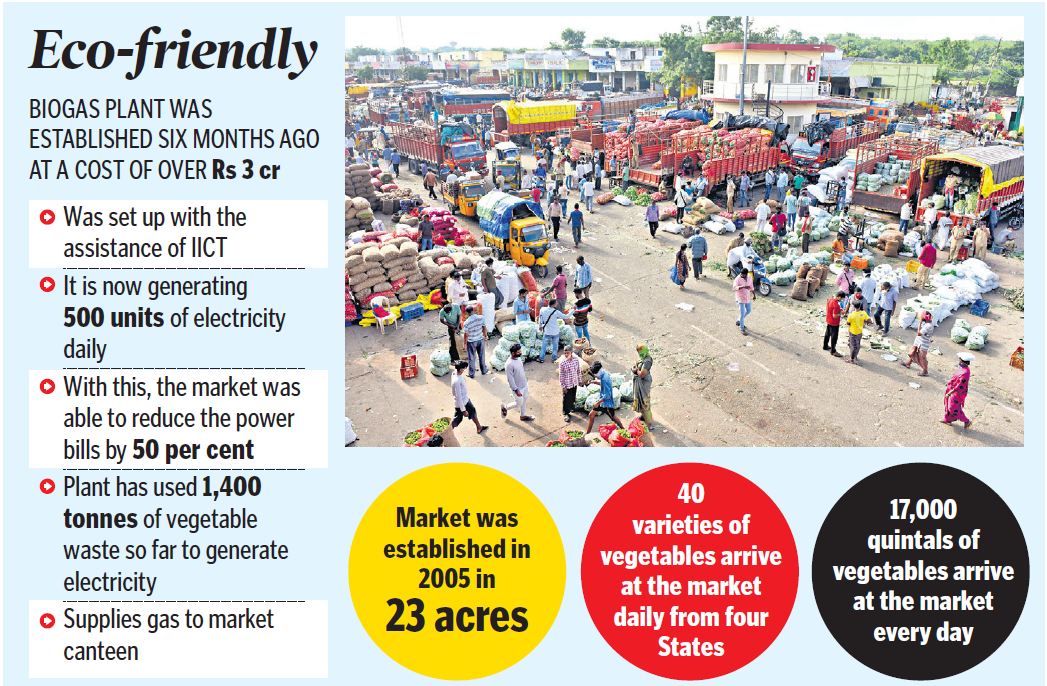