Pioneers of a sweet journey

Hyderabad: With colourful sweets on one side and snacks on the other, you know you are in one of the most popular sweet spots in Hyderabad – Dadu’s. While for customers, Dadu’s is all about good quality sweets, for its owner Rajesh Dadu it is a dream come true.

Started in 1993, Dadu’s has grown from being just a mithai brand to becoming a food company that provides snacks, chats and ice-creams.

Rajesh Dadu started the business at a young age after working with his uncle in his sweet shop in Bengaluru. Though the initial three to four years were a struggle, he stuck around believing in his idea and willpower to provide the best quality sweets to Hyderabadis.

Turning point
“It was in 1998-99 that we started getting orders to supply sweets for marriages and that was the turning point for us. The biggest break, however, came when we got an order from Dr Reddy’s to supply 5,000 kg of sweets for their employees. They called a lot of vendors and wanted something that was long-lasting as well as tasty. That is when we prepared Motichoor Ladoo with a special recipe. It was a big hit and Dadu’s became synonymous with Motichoor Laddoo.”

The going was tough in the initial 10 years. Though there were many challenges, two had to be addressed on priority – one the need to provide good quality packaging and second, to reinvent themselves constantly. For the latter, Rajesh Dadu with the help of a well-known caterer started making fusion sweets with fruits and dry fruits. But before going large scale, he tasted it himself. They were the first in Hyderabad to introduce fusion sweets with real fruits like fruit jalebi and seethaphal sweet, claims Rajesh Dadu.

Customised Packaging
They even pioneered the concept of customised packaging. It was in 1998 when a customer came calling with a box and desired that his order of 50 kg sweets be packed in a similar box. “I was in a fix as I did not know anyone in Hyderabad who could design such boxes. That is when I spotted a number on the box and called them up. The box was made in Delhi and till date, we get our packaging boxes from Delhi and Kolkata so as to maintain quality,” shares Rajesh Dadu.

Soon they opened their second shop in Secunderabad. This place too became the pioneer in providing chats along with sweets. Today the business boasts of having six outlets in Hyderabad. Going ahead, it plans to open five to six more stores in the city and introduce new items like fusion food and sweet-based ice-creams among other things. 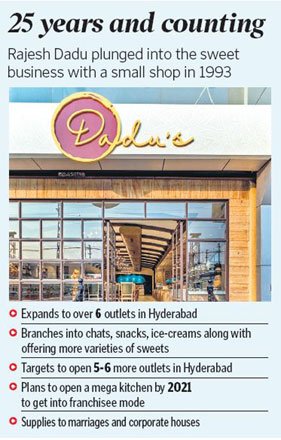 “One of the biggest learnings for me in the last 25 years has been that you need to constantly innovate in whichever field you are in and you should never compromise on quality and customer service. I can proudly say that we are the pioneers in most of the innovations which have been replicated by other sweet shops in Hyderabad,” says Rajesh Dadu who runs the business along with his wife Deepa Dadu. With the daughters already trained in hospitality and culinary, the next generation is ready to take over.