This month marks the crowning glory for Hyderabad on the landscape of foreign investments in the country with the city succeeding in getting the largest foreign direct investment from technology and e-commerce giant Amazon. The company has green signalled the investment of Rs 20,671 crore to set up data centres in the city for its Amazon Web Services wing. As Hyderabad shines bright on the investment firmament, it has left many of the earlier preferred cities way behind.

In 2014, when Telangana had just started taking baby steps, Amazon was getting ready to set up its fulfillment centre in Bengaluru, a darling of the IT industry. It was not an easy job to convince Amazon that Telangana understood e-commerce better, then a still fledgling sector in the State. A team led by Principal Secretary, Industries, Jayesh Ranjan, was assigned the task to convince Amazon set up its fulfillment centre in Hyderabad.

“We had multiple interactions with Amazon including in Seattle and Davos and pitched Hyderabad hard. These interactions were crucial in Amazon deciding to set up its three million-sqft office in Hyderabad, its largest office. After that, they gained confidence. Thereafter, we again met them at Davos for further negotiations and discussions on incentives. We succeeded in clinching the deal and Amazon decided to set up its data centre (Amazon Web Services) here in Hyderabad,” Industries Minister KT Rama Rao said.

That the repeat investment comes in even as the world is grappling with the pandemic makes Rama Rao particularly happy. This will significantly increase employment potential in the data centre segment in Hyderabad and in Telangana, in general, and will also give impetus to server manufacturing and other segments.

AWS, the cloud platform of Amazon, is investing to set up an AWS Region with three Availability Zones (AZs) here. AZs consist of multiple data centres in separate distinct locations within a single region that are engineered to be operationally independent of one another with independent power, cooling, physical security and connections via a low-latency network.

Apple of all Eyes

Back in 2016, Apple chose Hyderabad as its new address to provide a world-class LEED-certified home for its expanding Maps team. “Apple is focused on making the best products and services in the world and we are thrilled to open this new office in Hyderabad, which will focus on Maps development. The talent here in the local area is incredible and we are looking forward to expanding our relationships and introducing more universities and partners to our platforms as we scale our operations,” Tim Cook, Apple’s CEO had said then. Apple’s announcement followed big investments from Google and Microsoft. Facebook too has its presence in the city.

But what attracts investors to the State? Huge hard work goes into convincing companies to come to Telangana, shares a senior official working to bring in global investments. “There is a lot of competition among various States to get these investments but we have a good sales and marketing person in our Industries Minister. With the Minister himself leading from the front, it provides us the much needed decisiveness and winning edge,” says the official, who has been a key part of many such delegations.

Complementing these efforts are land availability, continuous creation of good common and civic infra, attractive incentives, power situation, cost of living, safety and security to name a few. The State also follows a cluster approach — it tries to bring similar ecosystem players to set up their operations, thereby ensuring that the key ancillary units come closer to anchor industries. In another approach, it woos companies from the same geography to invest big in Hyderabad, for instance, from South Korea, the US and the UK.

“We host the companies here, take them personally to show the infra, land and other facilities we offer, and make every effort to meet their expectations. We go all out and leave no stone unturned. Even as we speak, there is one big delegation in Hyderabad to see what we are offering. Hopefully, we will have another big announcement shortly,” said an official in the know of things.

Telangana works on a multi-pronged strategy that not only involves attracting new companies and industries to set up operations here but also focuses equally on ensuring that the existing investors continue to find Hyderabad the best option in India.

“When the new State Telangana was formed, Chief Minister K Chandrashekhar Rao had told us that while new investments are needed, it was equally important to take care of the existing industries as they would be the brand ambassadors to attract future investments to the State. We have ensured this has happened in letter and spirit,” shared Rama Rao.

It was this approach that was behind the making of the now immensely popular TS-iPASS – the regulatory system that relies on self-certification of companies for granting permission to set up industrial units. Through this channel, the State has secured investments of about Rs 2 lakh crore in the last six years and about 23% of them have come from the existing investors. About 80% of the announced investments are already operational.

“But all these do not mean that our efforts to make Hyderabad a global city faces no issues. There are legacy issues but we are not here to blame anyone. We do not have a magic wand but we have intent and the seriousness to build and improve,” Rama Rao puts it straight.

That the government has been working as an enabler is proved well by the several initiatives that it has launched after the State’s formation. The popular T-Hub, to promote the startup ecosystem, and its offshoots such as We-Hub and T-Works are working as catalysts for growth (see box below).

In 2014, the worsening power situation had the industry on tenterhooks and many of them were taking power holidays for two days in a week. With production falling, many were cutting down on the number of employees. The State focused on improving the power situation within six months on a war footing. This is one of the key reasons for the existing companies and industries to continue their operations in the city. The State government also set up Invest Telangana, with 12 directors each looking after one sector.

An Integrated Township Policy that encourages development of self-contained townships — that promote live, work, play, learn projects around the Outer Ring Road — is the latest from the State government to make the city the heart of investments in India. This initiative is important as it will aid in reducing congestion in the western part of the city. The government has also brought in a Growth in Dispersion Policy, which provides additional incentives to companies creating employment opportunities in the city (except in the western part).

“Hyderabad is a confluence of history, culture, heritage, and now new-age technologies. We lacked in positioning it the right way. Once we started doing it, the results are there for all to see. We had a point to prove to many naysayers. There are no half measures when it comes to protecting and promoting Telangana’s interests,” stresses Rama Rao clearly stating his intent to keep the accelerator pressed on bringing in investments and developing Hyderabad, and Telangana. 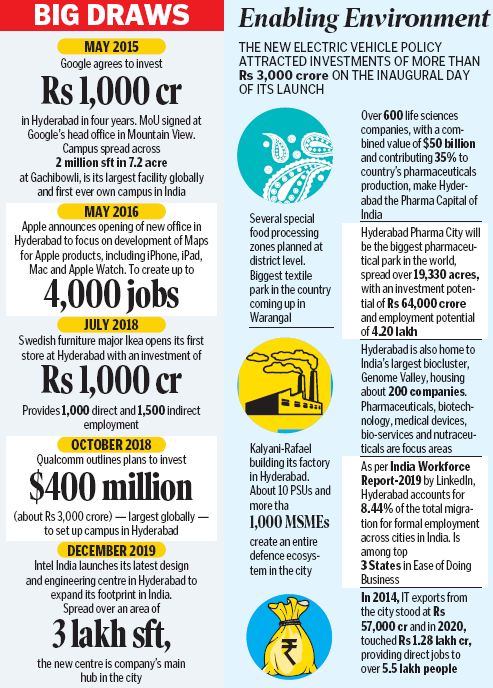 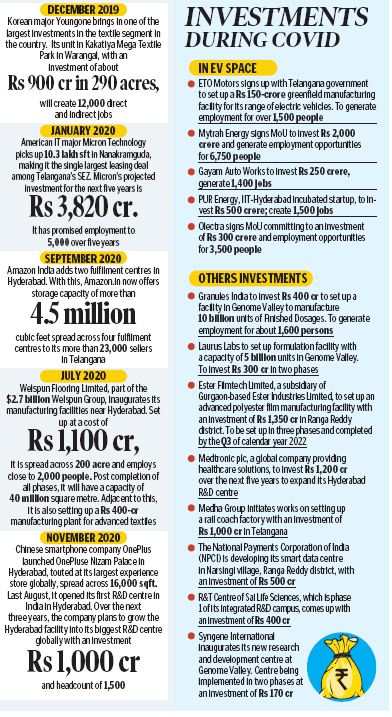 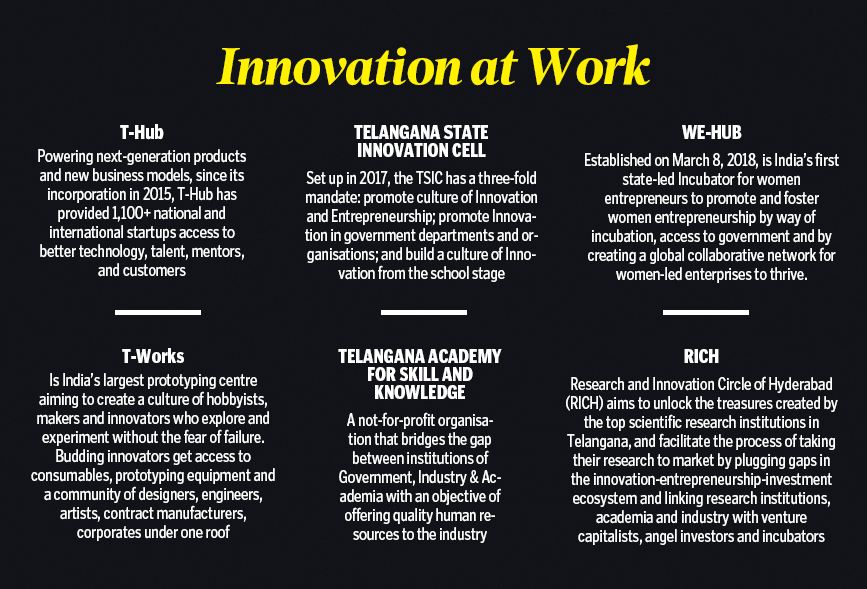