Hyderabad: From the south of the city to the north, from public representatives to school students, NGOs and corporate firms, people from all walks of life came out on Thursday to observe the fourth edition of the International Day of Yoga with various asanas and meditation sessions.

To begin with, the Yoga Day celebrations were organised by Department of AYUSH, Telangana at Gachibowli Stadium in which several ministers and senior officials took part to practice yoga for mental and physical health.

Health Minister C Laxma Reddy said the government was moving ahead towards building a healthy State. He advised the gathering that instead of taking medicines for every illness, one must safeguard health by doing yogasanas.

Union Minister of State for Road Transport and Highways, Shipping and Chemical and Fertilisers, Mansukh Laxman Mandaviya, who was present at the event said lifestyle diseases like blood pressure, diabetics and depression could be controlled with the help of yoga.

Extending his greetings at Raj Bhavan, Governor ESL Narasimhan said everyone should imbibe the practice of yoga as part of the daily lifestyle to maintain good health and fitness.

“Practice of yoga is very simple and by practising pranayama or breathing exercises for 10 to 15 minutes every day, one can maintain better mental and physical health,” he said.

To mark the occasion, Armed Forces establishments and Army Public Schools under Telangana and Andhra Sub Area (TASA) celebrated International Yoga Day in the presence of thousands of soldiers, JCOs, officers and students.

In two different events, the National Institute of Rural Development and Panchayati Raj, Hyderabad and Forest Department organised yoga sessions for their staff to raise awareness and benefits of yoga. Health institutes such as KIMS Cuddles, Basavatarakam Indo American Cancer Hospital & Research Institute, Apollo Hospitals and others too observed the day.

61-year-old Ramaya Reddy, who underwent a double total hip replacement, demonstrated yoga at Apollo Hospitals to dispel any apprehensions and encouraged patients of arthritis and joint replacements to lead an active life.

International Yoga Day organised in Warangal on Thursday received good response from people of all age group. Many educational institutions, government departments and other organizations observed the yoga day.

“Yoga should be made a part of the life. In view of the stressful life in modern times, everyone should practice yoga to beat the stress to lead a healthy life,” said Field Publicity officer of Warangal and Karimnagar A Srinivas. He addressed an event organised as part of the international yoga day celebrations by Field Outreach Bureau at Urbane Junior College, Hanamkonda. 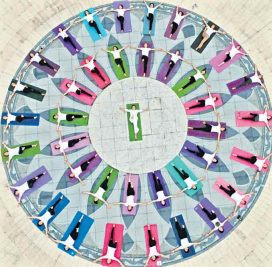 Under the guidance of yoga master Poshala Srinivas, nearly 120 students and teaching staff of the college performed yoga asanas and pranayama on the occasion. Junior college Principal Krupakar explained on the efforts of Prime Minister Narendra Modi to declare June 21 as International Day of Yoga by United Nations. With the initiative of Prime Minister Narendra Modi ‘International Day of Yoga’ has been celebrated in hundreds of nations around the world and across India. Yoga has been a valuable gift to the world given by India, he pointed out.

Urbane Junior College Vice-Principal Aparna, Field Publicity Assistant Harisingh and faculty were present on the occasion. Prizes were distributed to the winners of Quiz and Essay Writing competitions conducted on the occasion of International Yoga Day.

In Adilabad, Collector Divya Devarajan took part in the celebrations organised at Adilabad Harithavanam at Mavala village. She suggested general public practice the ancient way of fitness and to stay healthy. “It was scientifically proved that yoga helps us in staying fit,” she informed. Instructors Rajalingam and Umarani taught various postures.

Mancherial Collector RV Karnan participated in Yoga Day conducted on the premises of the 13th Battalion of Telangana State Special Police (Indian Reserve) at Gudipet village in Hajipur mandal. He distributed to certificates of appreciation to some students who excelled in yoga. Battalion’s commandant GVS Murthy and many others were present.

Representatives of Sri Bhagadgeetha Adyayana Mandali observed the occasion. They displayed different postures and took out a rally. They distributed special diet for participants of the event. Maitry Prakriti Yoga and some other organisations also celebrated the Yoga Day. They explained the importance of the yoga for staying fit.

In Nirmal district, Rajiv Gandhi University of Knowledge and Technologies (RGUKT}-Basar’s NSS cell and physical education wing of the institution organized an event. Administration Officer Venkataswamy narrated the role of yoga in one’s life. He opined that it can help handle both physical and mental stress. It has to be an integral part of our lives, he added.

The 4th International Yoga Day was celebrated on a grand scale in erstwhile Karimnagar district on Thursday. Public representatives, government officials, students, representatives of various organisations, among others, participated in the celebrations and practised yoga.

Inaugurating celebrations in Karimnagar, MP opined that yoga would help the people to get relief from stress and lead a healthy life. Some chronic and long-standing disease would be under control with the regular practice of yoga. “Every citizen should take up yoga and meditation as a part of their day-to-day activities. The government has sanctioned Rs 1.30 crore for maintenance of Ayush and Yoga centres,” Vinod said.

CP said yoga helps to strengthen mental and physical fitness. While foreign countries were giving top priority for yoga, it was not proper on the part of Indians’ to neglect age-old practice.

Irrespective of caste and religion, people should come forward to practice yoga. CP thanked officials of various departments and educational institutions for sending their children to make the event a grand success.

‘Allocate some time for yoga everyday’

On the occasion, Collector said yoga is a part of Indian culture, saints and seers had recognised the significance of yoga. United National (UN) has recently recognised the importance of yoga as our Prime Minister Narendra Modi spread the importance of yoga in the international arena.
All of us should allocate some time for yoga every day, because it helps in increasing immunity, obtain mental peace, and help habituate to positive thinking and problem solvation capability, Collector said.

Thousands of yoga enthusiasts of various levels of skills, ages and nationalities laid down their mats, relaxed and communed with nature as part of the celebration of World Yoga Day in Gulf countries on Thursday. Celebrations began on Wednesday and will continue across the region on Saturday.

Fourth International Yoga Day is being celebrated at various public venues with the support of Indian diplomatic missions in the region. Host of events that includes onstage yoga, yoga posture and fitness competitions and sessions by various yoga schools, were conducted by Indian missions to commemorate day.

Video message from Prime Minister Modi, from Dehradun where he led thousands of volunteers to perform yoga asanas to mark the Yoga Day, was screened at the venues on Thursday.

In Saudi Arabia, event was formally inaugurated in Riyadh on Thursday by Ahmed Javed, Indian Ambassador in the presence of host of several foreign diplomats.

Several Saudi and Arab and other nationals participated in the event by performing yoga asanas. In Jeddah, Indian Consul General Noor Rahman Sheikh has surprised audience with his posture or asana of headstand where he put head down and legs straight up. In Yoga, it called as Shrishasana and regarded as highest among all Yoga postures. Several people came has come forward to shoot the scene where he was doing headstand.

In Oman, yoga day marked at Oman Convention and Exhibition Center where most of Omani and other woman attended.

Most of emirates in UAE celebrating the event, it was held with massive participation at Umm Al in Abu Dhabi and Gulf Asian Modern School in Sharjah on Thursday and similar event was held at grand scale in Umm Al Quwain on Wednesday which was attended by Indian consul general Vipul and local officials from UAQ emirate.

Series of large scale events are scheduled for Friday and Saturday in Dubai by Indian Consulate and Art of Living.