Post the Supreme Court’s judgement of January 25 ordering conduct of panchayat elections in February, the State Election Commissioner and the government of Andhra Pradesh have locked horns once again.

There is a virtual war of words, abusive indeed, and a flurry of administrative decisions to transfer All India Service Officers by the State Election Commissioner.

The government of Andhra Pradesh lost an opportunity in the court battle to attribute political bias (mala fides) to the State Election Commissioner when the Supreme Court began hearing the case. It took a different route of defence to defer elections – a) that there is an ongoing programme of Covid-19 vaccination and b) that the State bureaucracy is not cooperating for the conduct of elections due to Covid-19 fears.

At a media conference in Kadapa on January 29, he praised the rule of YS Rajasekhara Reddy as better compared with the present. He also reportedly said he knows about all the evidence in CBI cases pending against Jaganmohan Reddy. Since he is still a serving officer, he is bound by Services Conduct rules.

It is also reported in the media that he wrote a letter to the Governor stating that if his recommendations are not accepted, he may approach courts – a veiled warning to the Governor. The letter was allegedly leaked to the media. He also ordered the transfer of All India Service Officers viz, The Principal Secretary to Chief Minister Praveen Prakash and the District Collectors of Chittoor and Guntur.

In the case of the Principal Secretary to the Chief Minister, it needs to be noted that he is not mainly connected with election duties. In the case of District Collectors, he has not observed the principles of “natural justice” viz, of hearing the version of the Collectors and taking their explanation before transferring them.

Panchayat election in the States is a State subject. But the Constitution has been amended by Parliament through insertion of certain Articles. Articles 243J and 243K are relevant to mention. The panchayat elections ought to have been better left to the State government for conduct and regulation since village panchayats are the only symbols of “deepening” of democracy. They do not have the power of legislation, etc.

Article 243 K(2) states that subject to the provisions of any law made by the Legislature, the conditions of service and tenure of office of the State Election Commissioner shall be such as the Governor may by rule determine. Proviso to Article 243K provides that the State Election Commissioner shall not be removed from his office except in like manner and on the like ground as a Judge of a High Court and the conditions of service shall not be varied to his disadvantage after his appointment. 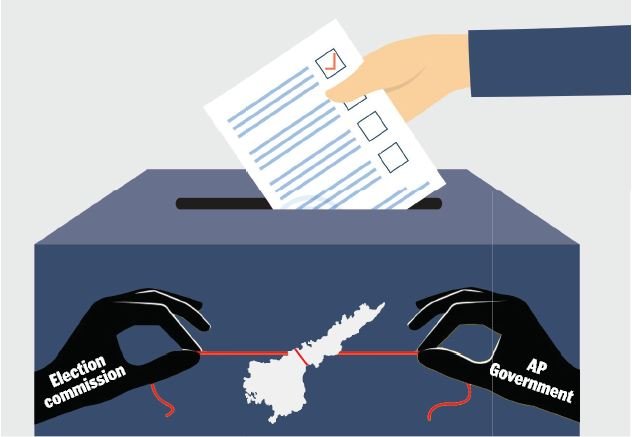 It would thus seem that the State Election Commission is provided with iron-clad guarantees in respect of service conditions. He is removable through the process of impeachment in Parliament which is not a feasible proposition. Why the constitutional amendment gave such huge protection of the State Election Commissioner is a moot point. While a high court judge is appointed by the President of India after an elaborate procedure of recommendation of the collegium of Supreme Court, recommendation of a Governor and High Court Chief Justice, State Election Commissioner is appointed only by the Governor without such an elaborate process.

Appointment by Governor effectively means the recommendation of the elected government. He can be removed by 2/3 majority in the State Assembly unlike the 2/3 majority required in Parliament to remove a high court judge. When the yardstick of appointment of the two institutions is vastly different, the removal process also needs to be different.

Thus, the State Election Commission has come to acquire disproportionate power – unbridled indeed in the conduct, superintendence and control of panchayat elections. Exercise of power without accountability is tyranny.

At any rate, and in order that it carries conviction with the duly elected government and the public at large and in the larger interest of democracy, it is necessary that the decisions of the State Election Commissioner be in the nature of “Speaking Order” and not arbitrary and whimsical.

The overall role of the State Election Commissioner is to conduct elections in a free and fair manner – that there is no violence or coercion in the exercise of franchisee, that there is no rigging, booth capturing, no influence of money and liquor, etc.

The following decisions of the State Election Commissioner can be contested as partisan:

1. Decision to put on hold announcement of unanimously elected presidents
2. Not acting against N Chandrababu Naidu who released election manifesto contrary to law
3. Starting eWatch app without security permission, which is now temporarily stayed by the AP High Court
4. Imposing restrictions on movement of Panchayat Raj Minister confining him to home

The SEC, though has power of superintendence and conduct of elections cannot usurp all governmental functions.

(The author is a retired IGP)