Hyderabad: The RTC strike affected the normal life in the city with a part of the bus fleet staying off the roads and forcing commuters to look for alternative modes of transport on Saturday.

Following the strike called by TSRTC JAC in support of their demands, the RTC could operate 450 of its regular fleet of 3,500 buses. However, the RTC management hired and pressed into service 345 private buses to cater to the needs of passengers. 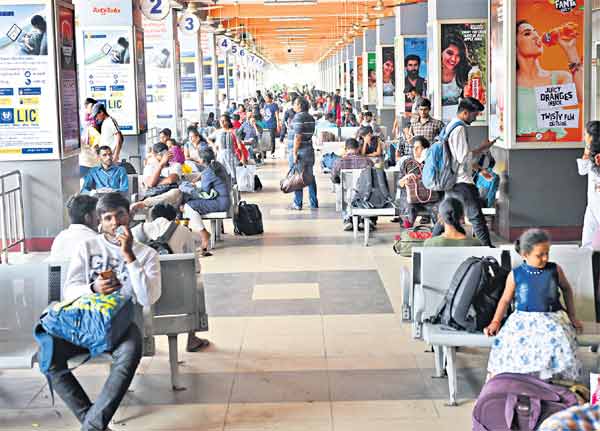 Many commuters on Saturday chose to rely on Metro Rail and MMTS services and autorickshaws and cabs were in huge demand. Several inter-district travellers were stranded at bus stations such as JBS and MGBS since morning hours as they waited in anticipation of buses to pick up them up. Left with no option, some availed private buses and taxis paying hefty charges to travel to their native places.

The Setwin mini-buses which usually witness low occupancy were packed with the passengers through the day. This apart, many utilised ride-sharing services such as Rapido, Ola and Uber, and did not hesitate to pay higher fares.

Cashing in on RTC strike, auto drivers completely neglected digital meters and fleeced passengers “I had to shell out Rs 250 for hiring an auto from Punjagutta to reach Secunderabad railway station,” said V Krishnaveni. Another commuter Satya Prakash from Tarnaka said thousands of citizens faced difficulty in reaching their destinations.

V Venkateshwarlu, Executive Director (Greater Hyderabad Zone), TSRTC said that to avoid inconvenience to passengers, efforts were made to operate 800 buses in the city. Telangana Mazdoor Union’s General Secretary, Ashwathama Reddy said that trade unions were not in a mood to call off the strike until government give a nod to their demands.

According to SCR officials, measures such as provision of additional ticket counters, queue management, frequent announcement on special trains, deploying required RPF and Ticket Travelling Examiners were made to clear passenger rush at Secunderabad, Kacheguda and Hyderabad railway stations.

While TSRTC bus depots wore a deserted look in the city due to strike, Metro stations teemed with passengers since Saturday morning. Till 7 pm, over 2.92 lakh passengers travelled in the Metro trains as against the regular patronage of 2.17 lakh passengers during normal days.

In view of the strike, Hyderabad Metro Rail operated services for extra hours with trains starting from 5 am onwards and the last train left the terminal stations at 11.30 pm.

In addition to this, the frequency of trains was also increased to three minutes during peak hours and five minutes during the non-peak hours. For the convenience of passengers, additional ticket counters, machines and manpower was deployed at busy stations.

To avoid any inconvenience to passengers, Metro officials had planned to operate 810 trips on Saturday. Saturday being a holiday and with Dasara holidays going on, there was not much passenger rush but officials are expecting the rush to increase on Monday.

“We will deploy additional staff and operate more services as per requirement on Monday, if the strike continues,” said HMRL Managing Director NVS Reddy.

Traffic cops get into action mode

Setting another example of people-friendly policing, the Rachakonda Traffic Police got on to the roads on Saturday carrying placards with messages for private buses and autorickshaws not to charge the passengers heavily during the bus strike.

In view of Dasara and the TSRTC bus strike, there have been reports that citizens were being forced to shell out extra amounts to private buses, cabs and autorickshaws.

While regulating the vehicular traffic which had steeply increased due to the RTC strike and forthcoming festival, police officials also sought to create awareness among the citizens at the Vijayawada bus stop in LB Nagar.

LB Nagar Traffic Inspector Naga Mallu said the awareness programme was taken up on the instructions of superior officials.