Hyderabad: Setting at rest speculation amid rising Covid-19 cases across the country, Chief Minister K Chandrashekhar Rao was categorical in stating that lockdown will not be imposed in Telangana.

“No hasty decision will be taken in this regard, considering the adverse impact the pandemic had on everyone during the lockdown last year,” the Chief Minister said, adding a word of caution to the people to strictly follow Covid-19 safety norms and avoid mass gatherings.

“Self-discipline and self-control are the only solutions to contain the spread of coronavirus in the State. People must wear masks, sanitise their hands and maintain physical distancing to prevent the Covid spread,” he said, speaking in the Assembly after the conclusion of the discussion on the State Budget.

Chandrashekhar Rao spoke on a variety of topics, including tribal rights on Podu lands, inter-State river-water sharing issues, the State’s financial health and the success of the Dharani portal.

On the Covid situation in the State, the Chief Minister said the government was forced to close schools temporarily as a precautionary measure to safeguard children. “The entire world is suffering due to the adverse impact of coronavirus, and Telangana is not immune to this effect. But Telangana is one of the best-performing States which contained the spread of the virus effectively and simultaneously ensured economic growth despite the pandemic,” he said.

He said about 10.85 lakh people had been vaccinated in the State so far and more than 70,000 Covid-19 tests are being conducted every day.

“Prime Minister Narendra Modi, Union Ministers and other officials from the Centre are in touch with the State government. The vaccines are being released equally between all the States, and Telangana too is getting its quota of vaccines timely. We will vaccinate the entire population of the State as and when the vaccines are received,” he added.

Speaking on other issues, Chandrashekhar Rao said besides providing rights to tribals over Podu lands, Rythu Bandhu would also be extended to them. “A comprehensive plan is being worked out to find a permanent solution to the Podu lands issue, serving the dual purpose of ensuring livelihood for tribal farmers and conserving the forests,” he said.

He instructed forest officials to maintain status quo and not to harass the tribals until the government implements its plan. He pointed out that the forest cover in the State had increased by 3.6 per cent which, in turn, improved biodiversity in the State.

Asserting that the State government would not compromise on its share in the Godavari and Krishna waters, Chandrashekhar Rao said the government would pursue all legal courses to protect its rights. The State government, he said, had already raised its objections over the construction of the Rayalaseema Lift Irrigation Scheme with the Andhra Pradesh government against which the National Green Tribunal and other courts had issued stay orders.

A delegation would be sent to Karnataka soon to utilise Telangana’s rightful share of 15.9 tmc from the Rajolibanda Diversion Scheme, he asserted. “If needed, we will take the fight to Delhi and ensure justice for our farmers,” he added.

With the completion of the Sitarama project, he said the woes of farmers in erstwhile Khammam district under Nagarjuna Sagar ayacut would be solved permanently.

Hyderabad: Chief Minister K Chandrashekhar Rao has promised to increase the salaries of RTC employees too.

He said the issues would be discussed with the Transport Minister and officials before arriving at an appropriate decision that would be beneficial to the RTC employees.

During a discussion on the Budget in the Assembly, the Chief Minister said about Rs 3,000 crore was allocated to strengthen the TSRTC and the State government would take all measures to protect the corporation’s employees. He recalled the role of the RTC unions during the Statehood movement and promised that their salaries would be increased on the lines of government employees and teachers. 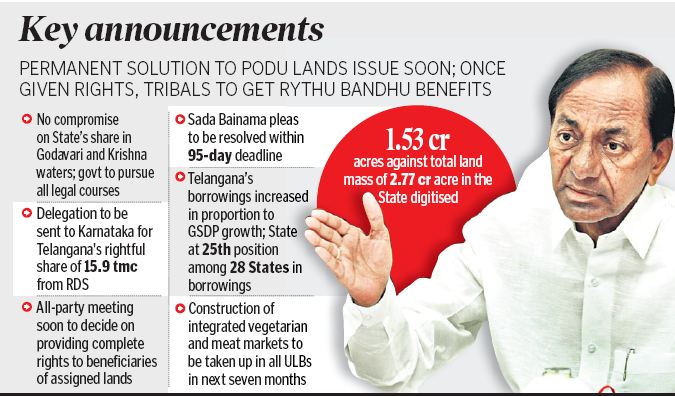