Nalgonda: Backed by the Integrated Fisheries Development Scheme, Nalgonda district has topped State in fish production in 2019. Moreover, prawn farming was also taken up in five reservoirs in the district under the scheme, which also yielded good results.

The district produced 19,515 tons of fish and 976 tons of prawns, the highest in the State. Under the scheme, the State government supplies free fishlings to the Fishermen Cooperative Societies to provide livelihood to fishermen in the State. Last year, 3.41 crore of fishlings of Ravva, Botcha, Meru Kala and Common Carp were released into 201 irrigation tanks and reservoirs. In addition to this, 9.92 lakh seedlings of prawns were also released into five major reservoirs of Dindi, Musi, Pendlipaka, Akkampally and Puttangandi, in the district. 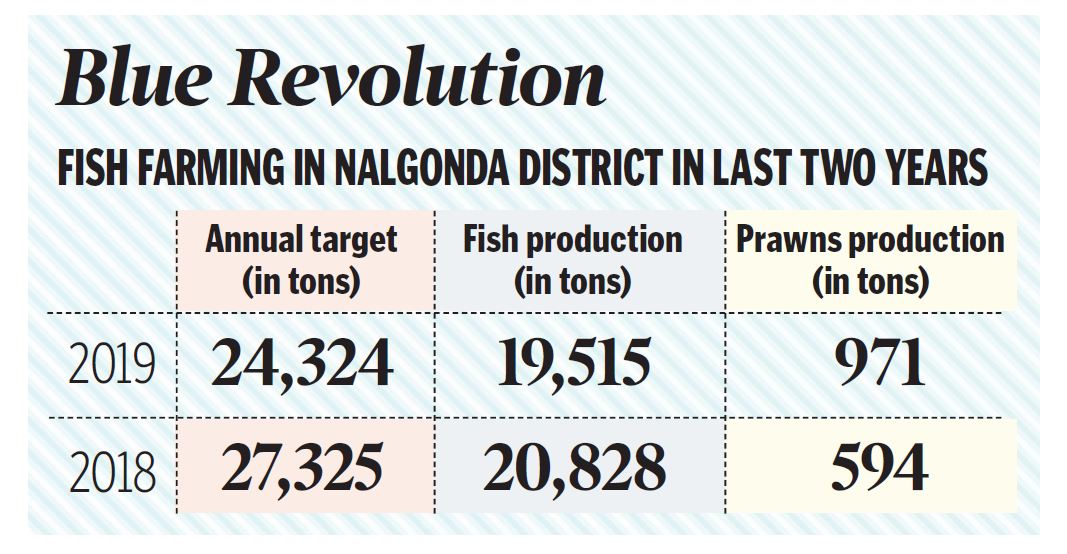 The fishlings released into Shaligowraram Reservoir in the district grew huge, weighing from 6 to 8 kg each taking the locals by surprise. In addition to local fishermen, about 200 fishermen from neighbouring Andhra Pradesh were also engaged by Fishermen Cooperative Society for fishing which was taken up from February 1 to 3 in Shaligowraram reservoir.

The increase in fish production has resulted in fishermens’ income going up multiple times.

Speaking to Telangana Today, director of Fishermen Cooperative Society of Ganga Devamma Cheruvu of Narayanapoor G Mallaiah said the economic condition of fishermen community had vastly improved after restoration of irrigation tanks and extending fishlings to them free of cost. With fresh fish available, people also took to fish consumption over other meat.

Singam Saidulu, a fisherman from Peddadevulapally, expressing his happiness, said their income was now constant throughout the year because of availability of water in irrigation tanks and reservoirs as fishlings were being released into them by the fisheries department free of cost.