Blood is most definitely the last of the sights to behold. Many a conflict these days end in gory bloodshed; yet what seems to bother the world to no ends is the least harmful of all bleeding – menstruation. However, lately, there have been remarkable attempts to break down the baseless taboos preserved for ages like fine wine.

A couple of years back, Rupi Kaur, the Canadian poet, writer, illustrator and performer of Indian descent, had taken internet by storm when she uploaded a picture of herself with blood stains on her trousers on Instagaram. The point, according to her, was to challenge the taboos. However, Instagram took the photo down, saying it violated the community standards. The controversy it spurred saw criticism as well as support pouring in, with Instagram finally restoring the photo. 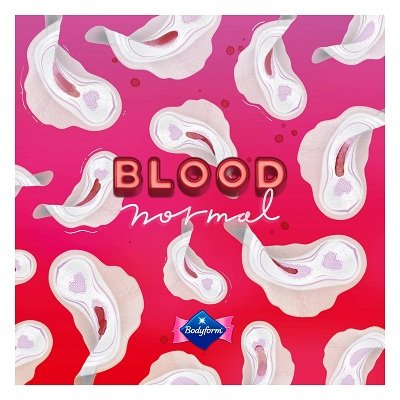 Over the course of time, many sanitary napkin brands, including Whisper came up with inspiring themes and campaigns such as #TouchThePickle. However, Bodyform, with its latest ad, has upped the game. As a part of its #bloodnormal campaign, the brand launched an ad, where, for the first time, the blue liquid that brands had resorted to since time immemorial, was chucked and replaced by a red liquid, representing blood. It then proceeds to show a trail of blood on the leg of a woman taking a shower. The ad also shows a man nonchalantly purchasing a packet of sanitary napkin. These images, which normalises the otherwise despised aspects of menstruation, has already created an impact on the audience.

Harshad Fad, Founder of Human Library Hyderabad Chapter says watching the ad made him actually feel like we are entering 2018 in a couple of months. “It is about time we treat and talk about periods like any other bodily phenomenon. I hope the use of blood and showing men and women buying the pads openly and not in black polythene is also emulated in Indian advertisements. Small steps like this can go a long way in improving hygiene and eradicating stigma around periods,” he reckons.

City-based psychologist Dr Radhika Acharya too sees this as a positive step. “Menstruation is a private matter, but not a taboo. As we are now trying to educate our children about destygmatising, initiatives like these will definitely have a positive impact,” she shares.

Sindhu Maria Nepolean, student of UoH, says these ads serve as a motivation to break free from the conditioning every girl has been subjected to during the days of upbringing. “We were trained from childhood to hush and hide. However, with bold initiations such as this, we have become more confident to care less. While it is good to be cautious, I don’t believe menstruation should be a reason to stop us from doing something,” she concludes.