Did you ever own a MAD Magazine? If yes, you are in for a massive shock. Known for its interesting caricatures and satirical content, MAD magazine which is considered as the pioneer of modern satire, will soon disappear from news stands. The famed magazine that often featured the grinning face of their tiny-eyed, gap-toothed child mascot, Alfred E Newman on cover will no longer be publishing fresh content after its August edition. Though it will still be available for subscribers and through comic shops, once its current volume is completed, the magazine will apparently take the best content from the last 67 years and reprint the material with fresh covers. But, one can still expect fresh special end-of-the-year editions, books and other collections. 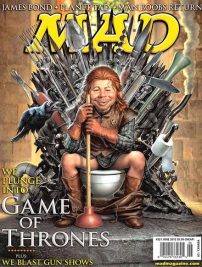 Readers worldwide reacted to the news with messages expressing shock, disappointment and nostalgia flooding the social media. “Of course, we all knew this was coming,” exclaimed Tom Richmond, a veteran MAD artist wrote on his blog post. “MAD had an incalculable influence on satire, comedy in general, and the humour of the entire planet,” he added. Singer-songwriter, ‘Weird Al’ Yankovic went down the memory lane in his Twitter post that read, “I can’t begin to describe the impact it had on me as a young kid; it is pretty much the reason why I turned out weird.”

While author Chris Scullion took the news pretty seriously writing, “If you aren’t massively familiar with MAD Magazine and don’t know the fact that it won’t be creating any new content is a big deal, read this: though they mostly focused on satire and parody, when they wrote could cut right to the bone.” Actor Mark Hamill got all nostalgic in his post, “Its hard to imagine a world without @MADmagazine! My older brother’s collection helped me learn to read. It taught a generation how to question and mock the status-quo. An honour & career highlight to be ridiculed mercilessly by that ‘usual gang of idiots’!” It goes without saying that the magazine will truly be missed and was an amazing blockbuster while it lasted.