Hyderabad: Popular lip-smacking sweets from Telangana and West Bengal drew the attention of the food lovers on the first day of the International Kite and Sweets festival organised at Parade Grounds in Secunderabad here.

‘Gulab jamun’ and ‘sheer khurma’ followed by snacks popular in Telangana along with ‘rasgulla’ famous in West Bengal sold like hot cakes at the stalls. Joshna Das from West Bengal did brisk business selling two varieties of ‘Rasgullas’.

While there were at least half-a-dozen stalls offering Telangana and Bengali sweets, others stalls made available the famous sweet in Kerala – ‘Wayanadan payasam’ which attracted many at the venue. Most families were seen relishing ‘bhel puri’, ‘chaat’ and ‘pani puri’ too.

One of the major attractions among the stalls was organic coffee sold by two girl students from Ethiopia who are presently studying in Osmania University. Winter special sweets and ‘lassi’ popular in Punjab also attracted many visitors.

Secretary for Youth Advancement, Tourism and Culture, Burra Venkatesham said more than 1,000 varieties of sweets from different States and countries were showcased at the event along with the snacks by the Hyderabadi residents who originally belong to other States and countries.

“As many as five lakh people are likely to throng Parade Grounds everyday during the event,” he said adding that elaborate arrangements were made at the venue for the convenience of people.

A five-minute colourful display of night kite flying using a remote instead of a string left everyone mesmerized at the event. Before inaugurating the International Kite and Sweets Festival at Parade Grounds in Secunderabad, IT and Municipal Administration Minister K T Rama Rao along with Tourism Minister had a glance of the night kite flying displayed by a team that came from Singapore.

Most participants also captured the images of night kite flying in their mobile phones. The team will fly kites at night for an hour from 7.30 pm using a remote on Tuesday and Wednesday, said Kite Consultant Pavan Solanki. 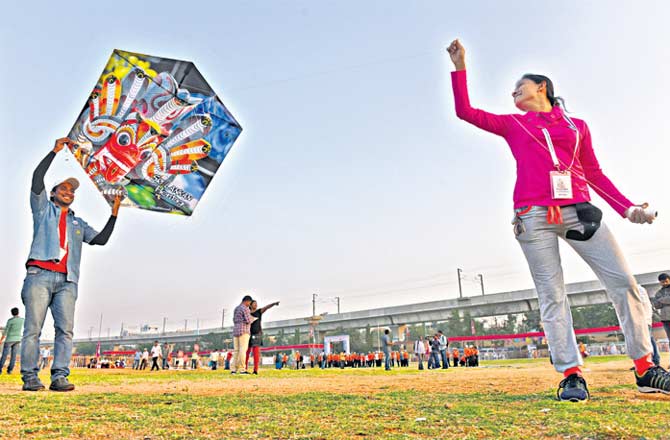 This apart, kite flyers from 13 countries are also taking part in the festival.