There is a sigh of relief and at the same time some reservations on Supreme Court’s verdict on the constitutional reforms in the Board of Control for Cricket in India (BCCI). Way back in January 2015, the court had appointed RM Lodha, former Chief Justice of India, to look into the functioning of the Indian board, which had run into rough weather after various scandals, including the IPL spot-fixing and betting allegations.

The three-member committee, headed by Justice Lodha, suggested some major changes to the constitution that shook the BCCI in July 2016. The case made history but it took more than two years before the verdict was delivered on Thursday. Justice Lodha was, however, unhappy with the tweaked constitution. He was disappointed. He felt that some of the key reforms were diluted. But he expressed some happiness that the efforts they put in have brought some results. What he liked was that the BCCI and the State associations will not remain what they were earlier.

When he started his work, he had an 82-point questionnaire for the BCCI. It required a deep investigation to understand how it functions. It began from the elections to the board, to formation of various committees, conflict of interest and transparency in IPL’s functioning. The committee faced stiff opposition from many of the office-bearers of the BCCI. The committee found fault in the administrative structure and it needed a revamp in the BCCI’s governance. 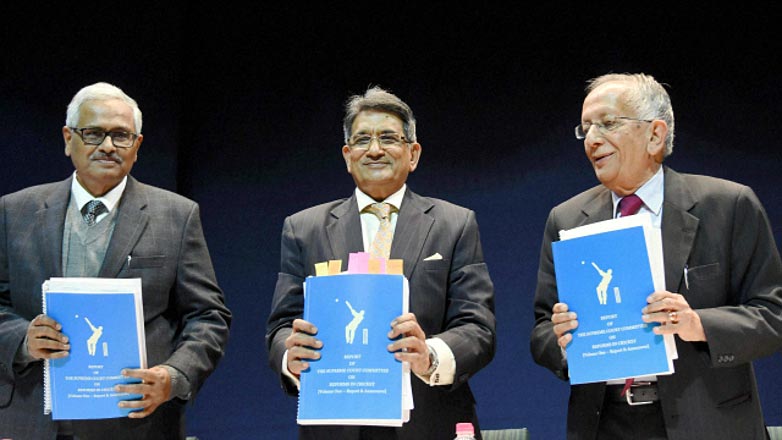 Justice Lodha clearly recommended one-state-one-vote, eligibility criteria for the BCCI’s office bearer and limit on their tenure in office. Above all, the reforms would see a full stop for serving ministers and bureaucrats or those above 70 years of age from holding a position in the board or their associations.

On Thursday, while delivering the judgement, the three-judge bench, led by Chief Justice of India Dipak Misra, made a few alterations. Many considered it soft, though the Committee of Administrators chief Vinod Rai said it was an excellent order. One of the contentious issues was the one-state-one-vote rule and the cooling off period. While Justice Lodha wanted one vote for Vidarbha and Mumbai in Maharashtra and Baroda and Saurashtra in Gujarat, the SC verdict said it was BCCI’s rich cricketing legacy and reinstated them as full State members. These associations have now got back full rights to vote in BCCI. However, the verdict did not grant voting power to other important members like Railways, Services, NCC (Kolkata) and CCI (Mumbai).

As per the Lodha Committee, there was a cooling off period in which office bearers should serve one term of three years either at the BCCI or State associations. This was bitterly opposed by both of them. The SC judgement tweaked this and said if an office bearer had held office for two consecutive terms in any post in a State association or the BCCI, such an individual must face a cooling period of three years. According to the judgement, the cooling off must be accepted as a means to prevent a few individuals from regarding the administrations of cricket as a personal turf. The game will be better off without cricketing oligopolies.

It further said no person shall hold the position of an office bearer in the BCCI or State association, regardless of the post, for a period in excess of nine years in the aggregate. CoA chief Rai commented that he has no problem with office-bearers having two consecutive terms. “Even I had originally wanted a six-year term before cooling off period but couldn’t get consensus,” Rai said.

The Lodha Committee restricted the number of selectors to three as it thought it to be more compact, would increase the authority of the selection committee and make it accountable. But the bench said with 28 teams, India has the highest number of first class matches. Senior selectors have to watch several matches, including domestic and international, so there is a need for the selectors to travel extensively to spot a pool of talent. It was necessary to accept the plea to have a five-member selection panel. However, every member of the selection panel needs to have a few qualifications like experience of seven Test matches or 35 first class cricket or 10 one-day internationals and then first class cricket.

The three-judge panel accepted the clause in the draft constitution for disqualification of those attaining the age of 70 years or minister or government servant or holding a public office. It also does not allow any person holding office in sports or athletic associations or federations apart from cricket. Most importantly, a person can be disqualified if he has been charged by a court of law for having committed any offence, ie, an order framing charges has been passed by a court of law.

Another significant order is that a former member of the Election Commission of India should conduct the elections.

Justice Lodha had made some earnest recommendations, which intended to ensure there was no concentration of power and monopoly within the cricket board. He felt that these were made by keeping in mind not just past office bearers but future ones too. The new generation will come as per disqualification criteria in new order, they will be there for a defined period — hence, there is little likelihood of monopoly.

The SC judgement could be yet another landmark in the history of Indian cricket. Hopefully, cricket will be the winner in the end with more transparency and the game being played in the spirit of the game. After all, cricket is a gentleman’s game.