The ‘Keeping Up with The Kardashians’ star shared a plethora of photos on her Instagram Story of 2 1/2 -year-old Stormi as part of a recent social media trend, in which followers use the app’s question feature to ask users to share specific photos. 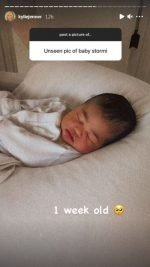 One of the fans asked Jenner to share an “unseen picture of Stormi,” which made the 23-year-old reality TV star posted a sweet photo of her daughter sleeping when she was just 1-week-old. On another slide, Jenner posted an image of Stormi cuddled up with her dad Travis Scott.