Hyderabad​:​ A team from Kerala will possibly come to the State to study in detail the infrastructure and functioning of the police stations in Telangana with a view to adopt the system there as well. Kerala Chief Minister Pinarayi Vijayan conveyed this during his visit to the Punjagutta Police Station here on Thursday.

The Punjagutta police station, which won the award for the country’s second best police station, earlier had several senior police officials from different States visiting it had Vijayan going around the station on Wednesday, enquiring about the infrastructure and functioning of the police station.

Elaborate security arrangements were made in view of Vijayan’s visit. Home Minister Nayani Narsimha Reddy and DGP M Mahender Reddy were present at the police station to welcome him. 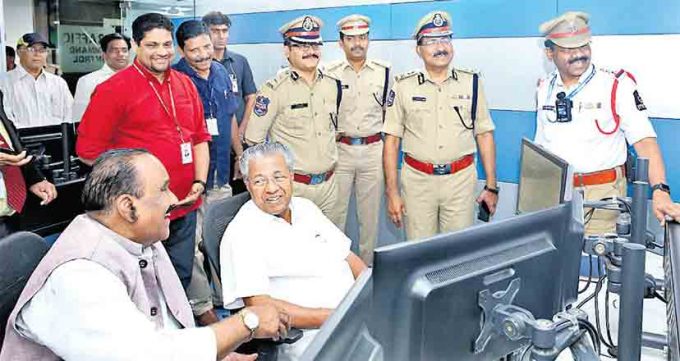 Expressing satisfaction over the functioning of police stations in Telangana, Vijayan observed the process of petition registration at the reception counter and the processing of the complaint. He has also visited various sections in the station. Later, he visited the Technology Fusion Centre and Traffic Command Control Centre in the Hyderabad City Police Commissionerate. The DGP explained the working of TS COP app and Hawk Eye mobile app.

Impressed with the Telangana State police’s performance and the infrastructure provided to the department, he said a team from Kerala would be sent to Telangana to study the system here in detail.

The Punjagutta Police Station was second best among police stations in India in a survey conducted by the Quality Council of India and Ministry of Home Affairs. A trophy was presented during the inaugural ceremony of the Annual Conference of the Director Generals of Police and Inspector Generals of Police at the BSF Academy at Tekanpur in Madhya Pradesh in January this year.