Karimnagar: BC Welfare, Food and Civil Supplies Minister, Gangula Kamalakar was unhappy over people not following social distancing norms at vegetable markets and shops while purchasing essential commodities. Though the government was striving hard to check the spread of coronavirus, people were least bothered about virus. It was not proper on the part of people to neglect social distancing decision taken by the government for the safety of the people, he said.

Stating that the situation in the town was serious, he opined that it was not possible to overcome the problem if the situation was continued further. Kamalakar along with Karimnagar Mayor Y Sunil Rao visited a few markets in the town on Thursday.

Speaking on the occasion, Minister opined that there was a possibility of virus spreading if people gather in groups at vegetable markets and shops. So, police would impose restrictions at markets from Friday onwards.

People were rushing to markets, super markets and shops at a time when the restrictions were relaxed from 6 am to 9 am in the morning and not following the social distancing. Action would be taken against the people those who violate instructions, he warned.

To avoid gathering of people, they are planning to sell vegetables at one place by closing all shops. There was no permission for vehicles to enter into vegetable markets. 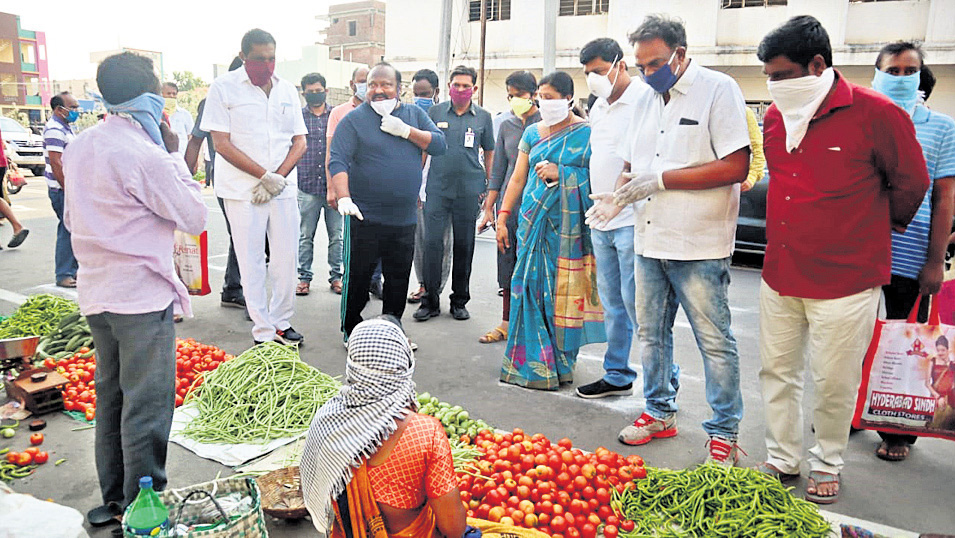 Karimnagar: BC Welfare, Food and Civil Supplies Minister Gangula Kamalakar on Thursday launched the distribution of 12 kg of free rice to the white ration card holders in the town.
Following the countrywide lockdown to check the spread of coronavirus, the State government had announced supply of free rice to white ration carder holders in the State. As part of the State government’s promise, Kamalakar started the scheme by distributing rice to people in shop no.159, Kisan Nagar in the town.

Speaking on the occasion, Kamalakar said Chief Minister K Chandrashekhar Rao took the decision to extend support to the poor since they would not get any work due to the lockdown. Stating that tokens would be issued to card holders, he advised the people not to come to the fair price shops at one go and also asked them to ensure social distancing while take ration.
Shop dealers were instructed to clean the machines after taking the thumb impression of each card holder. Advising the people not to venture out, he said there was no use in staying in the house through the day after moving around in groups at vegetable markets in the morning.

The district administration detained a couple who returned from the US on March 7 and shifted them to home quarantine on Thursday.

The couple, residents of Karimnagar town, went to Jagitial to attend the death anniversary function of relative. After coming to know about the incident, Jagitial RDO Narender and Circle Inspector Jayesh Reddy rushed to Vidhyanagar area where the function was being held and shifted the couple by ambulance to home quarantine. Police also registered a case against the retired revenue employ for organizing function without prior permission.